On a gentle hill in the Aventino valley, Palena lies at the far end of the Majella, with mounts Porrara and Coccia in the west, and artificial lake Sant'Angelo in the east, and comprises a very rugged territory, overlooking the upper Aventino valley.

The name has no certain etymology, though shares the same origin of the ancient name of "Palenus" given to the Maiella, mountain sacred to Jupiter Palenus. Many archaeological findings show that the place was inhabited since prehistory. There is no certain information for the Roman period, but there is evidence of a Lombard presence, after the fall of the Roman empire, in the many names left in the area and in the cult of Sant'Angelo, the patron saint of these German tribes.

The first news of medieval settlements date back to the 11th century, when the centre was a checkpoint on the road connecting Chieti to the Monastery of Valva, and from the Chronicon Vulturnensis we know it consisted of 11 "villas" (a Latin term meaning an agricultural community): Castello Alberico, Pizzo Inferiore and Pizzo Superiore, Castelcieco, Pietrabbondante, Valle della Terra, Forca di Palena, Villa Sant'Egidio, Malvicino, Villa San Cristanziano and Lettopalena. In this period the castle was built by the Maneri family, lords also of Pacentro. Then in the 14th and 15th century it was ruled by th Orsini family, later on by the powerful Caldora, who made Palena an administrative centre for the rich Maiella pastures. In 1447 a census was made in the Sangro Valley, and Palena had a count of 824 inhabitants.

The last medieval lords were the d'Aquino. There were two terrible earthquakes in 1456 and 1706. The Second World War caused massive destruction in the area, and now only ruins of the 11th-century castle, the belltower of the parish church and the fine chiesa del Rosario are left as memories of its glorious past. On the route of transhumance, Palena was well-known in past times for its woolwork. 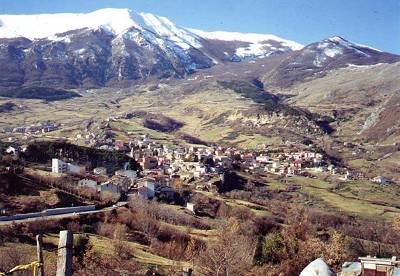 , an oasis of wide pastures left by ancient glacial lakes, rich in spring of migratory birds and wild flowers.