Hometown of Nicola da Guardiagrele, unsurpassed master of abruzzo jeweller's art, and "capital" of copper and wrought-iron crafts, this centre has also become universally famous as the "noble stone city" in D'Annunzio poem "Trionfo della morte". When you first arrive, you're welcomed by the sight of the Majella on the horizon, and the hills and calanques around. Inside the town traces of a rich past appear from walls and common houses.

A necropolis nearby show that the area was inhabited since prehistoric times, and there are also preroman and Roman remains in nearby Comino, where tombs continue to be found: in the year 2001 the 39th tomb, dated 6th century BC, contained the skeleton of a young girl, with bronze rings and pendants and a ceramic pot. In 1999 a 3000-year-old warrior was found, with a 60-cm long bronze sword with a decorated sheath, a fibula, a razor and four pots. A regional museum will possibly be established to contain the many findings at the nearby Comino necropolis dating from the 8th to the 3rd century B.C. The museum will be hosted in the chambers of the former cloister of San Francesco on a surface of over 400 square metres.

In the 8th century AD a Benedectine monastery rose in the area, and the Lombards built a citadel just above the ancestral settlement. In the 12th century a medieval citadel was flourishing under the name of Greellem. According to one of Abruzzo historian Lodovico Antinori, in the 13th century Guardiagrele was already a land of goldsmiths, and in a manuscript of 1324 prince Ursino gave permission to Luigi Ianuti to establish a corporation of 72 artisans which was called "Schola" from which term probably the frequent surname "Scioli" and its variations may have originated. In the 14th century the town also had its own mint.

It enjoyed great fortune thanks to its boundary location between the territory of the Marrucini with capital Chieti and that of the Frentani with capital Lanciano; Guardiagrele was a market centre where peasants, cattle-breeders and farmers came to sell their produce and to buy tools for their work and homes. Apart from Nicola da Guardiagrele this special town gave birth to many more famous figures, such as poet Modesto Della Porta.

Nicola da Guardiagrele (b c. 1395; d before 1462) - Abruzzo most celebrated goldsmith, was active in Guardiagrele, possibly trained in the workshop of his father, Andrea Gallucci, who was also a goldsmith and sculptor. Some of his works reflect Tuscan influence, in particular that of Lorenzo Ghiberti. This is apparent in the cross (1431; Guardiagrele, S Maria Maggiore) unfortunately stolen and dismembered - pieces have since been recovered but the largest part of the cross is missing.

Another great work is the altar piece called "Paliotto" (1448; Teramo Cathedral) with scenes from the Life of Christ. The Annunciation (Florence, Bargello) attributed to Nicola and his bust of St. Giustino (Chieti Cathedral) are examples of Nicola's activity as a goldsmith-sculptor, but he is most famous for his processional crosses. They are made of silver sheets that are chased, embossed and attached to a wooden support, often decorated along the edges with small copper balls. The figures are sometimes very complex, and characterized by a great variety of execution, as for example the Christ on the cross in L'Aquila (Museo Nazionale d'Abruzzo) and the finely carved figures of the gilded silver cross in St John in Laterano (Rome). 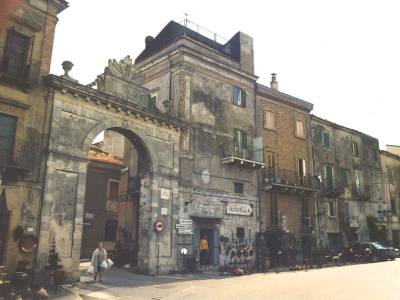