This small town takes its name from the chalk quarries of the area, and can offer a wealth of medieval monuments and lively traditions in art, architecture, music and culture.

Inhabited since Pre-Roman times, in the early Middle Ages it consisted of a group of houses clinging on a big rock called "Pietra Lucente" (Shining Stone) on top of which was an ancient castle. Later on the population moved a bit downwards along the ancient "Via Peligna". At the time Gessopalena was the main commercial centre in the Aventino valley.

The medieval citadel was seriously damaged in an earthquake in 1933 and destroyed by the Germans in World War Two; what was left of the ancient center was recently restored and transformed in the open-air "Museo del Gesso".

One of the leaders of the Abruzzese Resistance was Domenico Troilo from Gessopalena, who was awarded a silver medal for his bravery. The Brigata Majella was formed in the October 1943 by partisan officers and soldiers from the Italian army. The unit fought in the winter of 1943-44 behind German lines in many guerrilla actions. During this period many local peasant villagers joined the ranks of the newly formed brigade.

These partisans, mostly very young, preferred to fight separately but eventually in the summer of 1944 operated under the command of the British 8th Army until the end of the war. The Brigata was officially dissolved at Brisighella on July 15, 1945. Approximately 1500 personnel served during the Brigata existence. It's the only partisan brigade awarded the Gold Medal for Military Bravery. 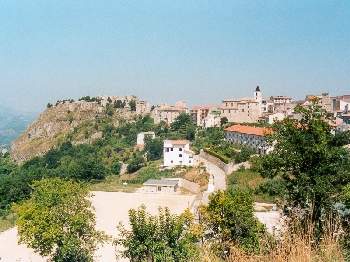