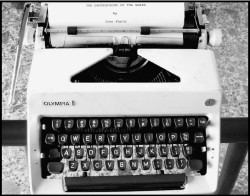 The last typewriter which John Fante used to type a novel («The Brotherhood of the Grape») before he became blind will be on show at the MediaMuseum, Pescara starting from next 14 August. His son Dan Fante will personally bring it from the States.
A writer himself, Dan Fante promised the gift to Edoardo Tiboni, organizer of the Flaiano prize, last year. In June 2006 he was a guest at the Museum in piazza Alessandrini, Pescara, in the course of an event when Robert Towne's movie «Ask the dust», based on John Fante's novel and starring Colin Farrell and Salma Hayek, was also shown to the audience. At the time Dan Fante promised that on his return to Italy he would donate the typewriter. And so at 6.30 p.m. next Tuesday, August 14, the typewriter will be entrusted to the MediaMuseum, Pescara, during an event organized by Valeria De Cecco, publishing manager of the AbruzzoItalia magazine.

The event will be attended by Dan Fante, Edoardo Tiboni, the MediaMuseum President and Flaiano Prize organizer, and Paolo Di Vincenzo, a journalist with il Centro, as well as a personal friend of Dan Fante and an expert of the productions of both Fantes. On the occasion also an excerpt of an interview taken last year for the Abruzzo Italia magazine will be shown.

The typewriter is an Olympia of the 1960's, and a key piece among the memorabilia of the Abruzzese-American writer, since everything else he wrote afterwards was actually dictated to his wife. Because of diabetes his eyesight was getting worse day after day, until ultimately he became totally blind. John Fante was born in Denver, Colorado on 8 April 1909, and died in Los Angeles on 8 May 1983.

«The Brotherhood of the Grape » (published in the Italian translation first by Leonardo in 1990, then by Marcos y Marcos in 1995 under the title «La Confraternita del Chianti» and again in 2004 by Einaudi with the better matched title «La Confraternita dell’uva») is a milestone work in the production of John Fante, whose father Nicola (Nick), had left Torricella Peligna in 1901. Basically, «La Confraternita » marks the return to literature after 20 years spent as a scriptwriter for Hollywood's majors, a job that the writer hated, but necessary to support his family.

The book. The story is about a successful writer (Henry Molise, another of Fante's alter egos) telling about his father, mason Nick «Casanova», who shows a close resemblance to Fante's own father, Nicola-Nick. At first John Fante «used to say that he was bored by the novel, and that he was writing just for the money», Stephen Cooper says in the writer's biography «Full of life» (published in Italian by Marcos y Marcos), «but getting deeper into the life of the Molise family Fante started to grow fond of it, stating it had become a “story about my own father”. Afterwards it was to become to him the dearest among his novels, and he confessed that often while he was writing he would be moved to tears. (It is) a novel with lots of drinking, brawls, tears and sex, not to speak of meals and detailed recipes, much more so than in his previous works altogether ».

Fante's acquaintance with Towne. «The Brotherhood of the Grape» is a counterpoint to his meeting with Robert Towne (who authored the script of «Chinatown») and through him with the whole Coppola clan. In March 1975, as Cooper explains in the biography, Robert Towne «purchased an ’option for the movie rights for 1,500 US dollars. Towne introduced Fante to the attention of Francis Ford Coppola, who agreed with him: “The Brotherhood of the Grape” would make a great film. Before that, however, Coppola wanted to serialize the novel on the weekly City. With Towne's preface, comparing Nick Molise to the not less exceptional figure of Jehovah “both very powerful characters that would never let anyone step on their feet” the novel was published in five serial installments between July and August.

Once again John Fante was in the limelight, and prospects for the future were truly exciting. And he was quite optimistic on the chance of turning the novel into a movie: after all, those two men were the best an old writer like him could ever dream of, both Academy Awards winners for movies that he had greatly admired, Towne's “Chinatown” and Coppola's “The Godfather”. John Fante was known among family members for getting away during movies he found boring, and, just as Sunday mornings' sermons, most movies bored him to death: but with his son Dan he had gone to see Coppola's “The Conversation” and stayed up to the very end».

Robert De Niro as protagonist. «in January 1977 Francis Ford Coppola», Cooper goes on in the biography, «invited the Fantes to San Francisco for a dinner in John's honor. Though he had already been ill for a long time, John knew that Coppola could not stay long: he was being awaited in the Philippines, where he was fighting the weather while filming “Apocalypse Now”. Fante accepted the invitation in the hope to get some insight into Coppola's plans for “The Brotherhood” and flew to San Francisco with his wife. They were taken to a theatre downtown where, while waiting, they listened to composer Carmine Coppola, the director's father, performing in Puccini's “Bohéme”. Later that evening, in the fascinating 22-roomed Victorian villa at Pacific Heights, Joyce and John Fante where entertained with an exceptionally rich dinner, with Joseph P. Alioto, the San Francisco mayor, animating the conversations, until surprisingly Fante's film “Full of life” was shown (...) In the hope to get some information (Fante) called his neighbor Martin Sheen, working on the set of “Apocalypse Now” (...) Sheen loved The Brotherhood, especially the way it dealt with the father/son relationship, and encouraged John to support the candidature of Alan Arkin in the role of Henry J. Molise, though Francis F. Coppola had probably Robert De Niro in his mind. (In late January) the Brotherhood of the Grape was at last in the bookstores, John Fante's first book after 25 years». The movie, however, was never made.

Dan Fante in Italy starting from today. Dan Fante will be in Italy from today. He will be landing in Leghorn, where next Saturday he will take part to a musical reading with the Hollowblue led by Gianluca Sorace, a Tuscan group that made a music version of one of Dan Fante's works.