How many were Garibaldi's Thousand?

In 1864 the Italian Ministry of War published a list with 1089 names on the Military Journal. Indeed, a State Committee was set up to ascertain how many and who were the real participants in the historic "Mille" expedition that led to the Marsala landing on May 11, 1860 and eventually to the unification of Italy. 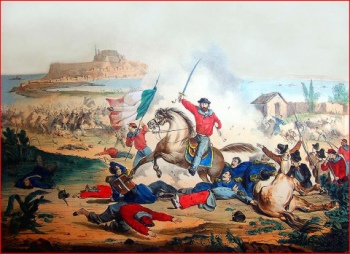 For the most part volunteers came from the regions of northern Italy: 434 from Lombardy, 194 from Veneto, 156 from Liguria; then 78 from Tuscany, 71 were Sicilians, and 35 foreigners; very few of the Thousand came from other Italian regions.

Almost half belonged to the middle and upper classes, and they were professionals or intellectuals (lawyers, doctors, pharmacists, engineers, landowners); the other half were craftsmen, merchants, some factory workers. Very few peasants or low-class people. There was also a woman (Crispi's wife).

The foreigners that joined the Thousands

There were many non-Italians. Among the British there were Colonel John Dunn, Peard, Forbes and Speeche (whose name was transformed into the Italian Specchi). Many were the Hungarian officers, who were prominent in the occupation of Sicily: Turr, Eber, Erbhardt, Tukory, Teloky, Magyarody. Figgelmesy, Czudafy, Frigyesy and Winklen. Among the Polish volunteers the two officers Milbitz and Lauge were famous, and among the Turks Kadir Bey. The group of Germans and Swiss was commanded by Saul Wolff.

Almost all of the Thousand were militant or sympathizers to the republican left, many had been conspirators; there were some 'Cacciatori delle Alpi', formerly belonging to the 'Death Battalion"', and others who had trouble with justice.

The volunteer corps was originally named "Cacciatori delle Alpi", and divided into seven companies, commanded by Nino Bixio, Vincenzo Orsini, Francesco Stocco, Giuseppe La Masa, Francesco Anfossi, Giacinto Carini and Benedetto Cairoli; the command of the Genoese Carabinieri was given to Antonio Mosto, in the Intendency there were Acerbi, Bovi, Mestri and Rodi, in the Stato Maggiore Crispi, Manin, Calvino, Majocchi, Griziotti, Bocchette, Bruzzesi, with Sirtori at the head; Turr, Cenni, Montanari, Bandi, Stagnetti, were appointed field aides and General Basso was secretary.
The two steamships, the "Piemonte" and "Lombardo", had the former Garibaldi as Commander, while Bixio had command of the latter.

The Medal and the Pension

In 1864, after the publication of the List by the Ministry of War the government was asked to grant a pension to the veterans. Law no. 2119 of January 22, 1865, regulated these pensions, and confirmed the issuance of authorizations to obtain a medal, already decreed by the Palermo City Council on June 21, 1860. There were detailed inquiries about the members of the expedition, and after a long work, completed In 1877, the list of beneficiaries was published in the Gazzetta Ufficiale of 12 November 1878.

Some names were deleted from the list of 1864: those who had died in the meantime and those who, on the basis of the Commission's investigations, were denied both the pension and the right to receive the medal.

In 1933 the Royal Commission, called on to implement the national edition of the writings of Garibaldi (the "Memorial" with the autographed text and the "Discourses"), as decreed by Parliament, in the preface to the work, noted that:

"... the Commission considered it appropriate to carry out the wish expressed by Hero in the introduction and in the last chapters of the third volume of his Memories, to include the names and portraits of the Thousand, which he himself collected in the volume 'Album of Pavia' (now kept in the Museum of the Risorgimento, Rome) and from it all the names and portraits of the thousand were derived, and are reproduced faithfully in the order in which they are found, without questioning their exact number, this being a still 'sub judice' problem. However, thanks to the generosity of publisher Cappelli, the portraits of the Thousand are included, adding also those who, according to Garibaldi's explicit declaration in his Memorial, deserved to be alongside the Thousand".