The Heroes of Fosse Ardeatine

The slaughter of Fosse Ardeatine became the emblem of Nazi repression in Italy: on March 24, 1944, Nazi occupation troops executed 335 Italian civilians and soldiers in retaliation, following a partisan attack on German troops that had taken place the day before in Via Rasella, Rome. 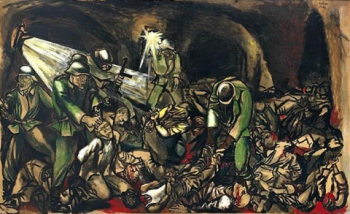 Between 1943 and the early 1950s, Sicilian painter Renato Guttuso made drawings, paintings and sculptures about the cruelty of the war, including the great table called "Fosse Ardeatine".

What are the "Fosse"?

The Fosse Ardeatine are ancient pozzolana (pozzolanic ash) quarries located along the Via Ardeatina, which leads from Rome to Ardea, on the Thyrrhenian coast; they were chosen as the site of the massacre in order to easily conceal the corpses inside the many caves and galleries.

After the September 8th armistice between Italy and the allied forces, King Vittorio Emanuele III fled from Rome and the city was occupied by German troops under the command of Feldmarschall Albert Kesselring; public order was entrusted to SS Obersturmbannführer Herbert Kappler, known as "the torturer of Via Tasso", who on October 16 had already deported 1023 Roman Jews.

On March 23, 1944, SS Police Regiment Bozen based in Via Rasella, near Barberini Square, was attacked by a group of partisans: a bomb placed in a garbage collector was blown up as Germans were passing by, killing 32; another died the next day. There were also two civilian casualties, Antonio Chiaretti and thirteen-year-old Pietro Zuccheretti.

Luftwaffe Generalmajor Kurt Mälzer, Commander of the German forces in Rome, immediately advocated a tough retaliation that Hitler himself had requested: 10 Italians for every German. The 1907 Hague Convention, which the Germans used as a justification, did not explicitly deal with reprisals, but was in any case overtaken by the Geneva Convention of 1929, whose Article 2 explicitly prohibits retaliation against prisoners of war.

Kappler, who was commissioned to execute the massacre, always justified himself saying that he had obeyed a higher order. There were no serious investigations on the attackers; the selection of the victims was aimed first at the prisoners linked to the military resistance and the partisans, then those of Jewish religion. However, the number reached was 310, so the Germans added those condemned for crimes of a non-political nature and also others just awaiting trial in the Roman prison of Regina Coeli.

The initial order concerned 320 people, as 32 German soldiers had been killed. During the night following the Via Rasella attack, another German soldier died and Kappler, on his own initiative, decided to add another 10 people. But by mistake it seems that five more people were brought to Fosse Ardeatine, who were also executed because they had seen everything.

The identification of the victims

Among those whose remains were identified (323 out of 335) 39 were officers and soldiers belonging to the clandestine Military Resistance, 52 were members of the "Partito d'Azione" and "Giustizia e Libertà" formations, 68 belonged to Bandiera Rossa, a trotzkyst-communist organization unrelated to the Comitato Liberazione Nazionale (CLN), and 75 were Jewish citizens. The others that were included to reach the expected number were common convicts. Among the twelve without a name there might also a German soldier who refused to execute the shooting order.

In his book on the massacre, historian De Simone tells about the murder of a 74-year-old woman, Fedele Rasa, native of Gaeta, who was living in Villaggio Breda, a displaced camp along the Via Casilina. The woman was picking up vegetables near the quarries when she was hit by gunshots around 5 pm. The motivation of this killing would be that she had not stopped, probably for hearing problems, as requested by a German patrol preparing the area for the massacre that was to take place in the next two hours. Fedele Rasa, the 336th unofficial victim of the Fosse Ardeatine massacre, died shortly afterwards, in the early hours of March 25.

Rome was liberated in June 1944. Only after that, on July 26, 1944, the exhumation and identification of the bodies could be started, coordinated by Professor Attilio Ascarelli (1875-1962). His team's precious, compassionate work made it possible for 326 of the 335 victims to be recognized.