The "onciario" was born from the need to remedy the chaotic situation that arose with the system of taxation in use until the mid-eighteenth century, which allowed the "universitates" (municipalities) of the Kingdom of Naples to adopt one of two different methods of taxation: one called "gabella", and the other "battaglione".
The system of gabelle levied duties only on consumed goods, while the battaglione system required an estimate of real property owned by the citizens and the income derived from their activities; then the "weight" (rentals etc) were deduced and the remaining values subjected to taxation. The battaglione system was in use in very few universities because most of them preferred to use the gabelle.
The aim of the Catasto Onciario law of 1742 was to establish a uniform of taxation throughout the kingdom; Charles III of Bourbon promulgated the new law with a dispatch on October 4, 1740, and then a series of regulations were issued by the Regia Camera della Sommaria between 1741 and 1742.

As can easily be imagined, there was strong resistance, all the more from the towns and villages accustomed to the gabella system, since the owners of properties were reluctant to give the "rivele" (revelations) of their property.

The preparatory work of the Cadastres were very slow, then on September 28, 1742 a royal provision established that they should be ready within four months. Nevertheless, after more than ten years, many communities in the Kingdom had not yet drawn up the document, so in May 1753 the king issued a new decree by which commissioners were to be sent to non-compliant communities to prepare the Catasto onciario.

Why was it called Onciario? The name comes from the oncia, a "virtual" currency, used to calculate income and related taxes. The legal tender money was the "ducato" with its subunits, carlino, grana and cavallo equivalent to respectively one tenth, one hundredth and one thousandth of the "ducato". The "ounce" used for the calculation of taxable income corresponded to three carlini in all instances, and to six carlini when referred to the income derived from farm animals.

The Onciario is a document of great interest and of fundamental importance for the reconstruction of the history of peoples and places where they lived. These manuscript documents can draw in the reader's mind the landscape and the protagonists of the evolution and anthropization of the territory. 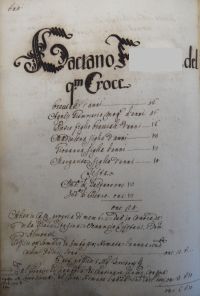 The taxes were of three types: the testatico (per-head tax), the same for everyone, which weighed on the head of the family (a family included all the people living under the same roof, with a head of family called the "capofuoco") until the completion of the sixtieth year of age, the tax on labor income ("industria") that weighed only on males from the age of fourteen (fourteen to eighteen years old paid less) calculated based on expected income for the various trades, and the tax on properties, livestock and capital lent at an interest.

The "testatico" was not paid by those who lived on revenue (without working) or exercised a liberal profession (doctors, notaries), then, paradoxically, in contradiction to what was stated in the law, the farmlabourer had to pay and a notary did not:
"the testatico sia con uguaglianza ripartito in modo che il povero venghi a pagare secondo le sue forza comportano, ed il ricco paghi a proporzione de suoi haveri ed in particolare a poveri di farsi lieve il peso, a cui presentemente soggiaciono e potendosi con facilità pagare gli enunciati pesi...".
["... the per head tax should be shared with equality so that the poor are to pay according to their power, and the rich in proportion of their properties so that the weight for the poor would be mild, which at present is unbearable, so that they will be easily able to pay the stated weight ..."].

In the following years the forms of tax rebates and exemptions turned out to be excessive and vanified the intent of a fair tax burden, exacerbating instead the hardships of the poorer classes. The experts sent by the king were the architects of the catasto, and described the social and economic realities of each place on the basis of the statements received from the citizens. The great amount of details allow today to reconstruct the size of families, professions, property, place names, neighborhoods, streets, livestock, etc.

Although the onciario did not fulfil the purpose for which it was designed, since in the end the king gave in and accepted the principle that municipalities could again choose whether to pay with the gabella system or with the catasto, the fact remains that this was a true and detailed inventory that today can be used for a variety of research. From the onciario we can draw information on taxpayers' assets, housing types, location and size, land borders, extension and farming, livestock owned by each family. We also find detailed information on household weights and burdens, usually from rents and fees to the feudal owners and ecclesiastical bodies.

As regards family history, the catasto was a census of all living individuals with their ages, information useful for genealogy and demographic research; from the bordering properties also kinship can be derived, and, though there were no coordinates to draw a map of the territory, from vicinity to rivers, roads, squares, fountains and size of lands approximate topographic maps can be drawn.