The Alpine Corps of the Italian Army was born in the late 19th century, exactly in 1872, when the Kingdom of Italy was faced with the problem of defending the borders along the Alps: so the Alpini became the Italian mountain troops, actually the oldest mountain infantry still active in the world. 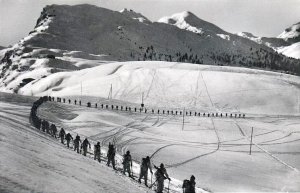 Their first mission was actually to Africa, in the Eritrea war of 1888. Later on, they were engaged in World War I especially at high altitudes, where the Alpini wrote important, glorious pages.

Soon after the end of World War I, in Milan in July 1919 the ANA (Associazione Nazionale Alpini) was founded, to keep together all the veterans of the Great War; today the Association includes 81 sections and 4200 groups.

On 5-7 September 1920 a first, spontaneous gathering was held on Mt. Ortigara, a sort of Calvary of the Alpini, on the border between Veneto and Trentino-Alto Adige; in 1917 this was the theatre of a fierce, bloody battle between the Kingdom of Italy and the Austro-Hungarian Empire. The Ortigara is the most sacred mountain for the Alpini: at the first gathering a monument was placed there, the Colonna Mozza, where the fundamental rule of the association is engraved: "In order to not forget".

Since then, the National Gathering of Alpini has taken place every year usually on the second Sunday of May in a city of Italy chosen from time to time by the National Executive Council of the ANA. 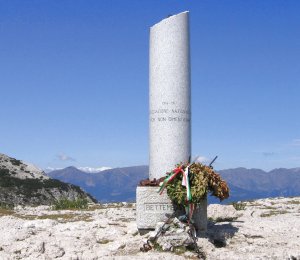 Historically, the figure of the Alpini has not changed much, although the areas of recruitment have widened: now they come also from Sicily, Calabria, Sardinia, whereas the earliest recruitment areas were mainly the northern regions of Italy and some central ones, as Abruzzo.

An Alpino is a mountain man who has learned to live in what is possibly the most beautiful environment, one however that that asks a lot and gives back very little. So the Alpini know that to live in the mountains even before being soldiers they must learn to help each other. Hence the corps pride that made the Alpini one of the Italian elite corps. The force that moves the Alpini and their true secret lies in their mountain training, which is very hard and difficult also because of often extreme weather conditions, a training that changes these men forever.

A social, humanitarian mission has become another feature of the Alpini corps, especially abroad to express solidarity and give help to people in need. Over the years the Association has changed its original motto into "let's remember the dead by helping the living'". The social involvement of the Association also came from such great figures as Don Carlo Gnocchi, an Alpini chaplain during World War II, a Silver Medal for valor, and a Blessed of the Catholic Church since 2009. 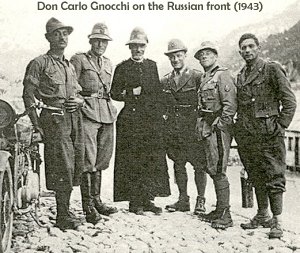 The distinctive symbol of the Alpini is the Cappello, on which there are: 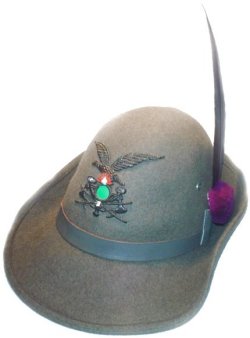 The anthem and traditional songs of the Alpini are a rich musical heritage as well: the lyrics tell of the sufferings and struggles faced by the Alpini during the wars, and are traditionally played by military bands on parades, concerts and reunions. For more information, on the songs, lyrics with translation and video clips, check the "Alpini songs" section.