This chapter introduces the different peoples as they became to be known in Roman times; contemporary scholars and historians believe that most, or all of them, were of the "Italic" or "Celtic" stock.
From Enrico Abbate's "Guida d'Abruzzo", Rome 1903.

The provinces that today are collectively known as Abruzzo did not form originally a political or ethnograpical unit. The name Abruzzo is a corruption of an ancient word deriving from the population of the Praetutii whose capital was Interamnia (present day Teramo), though it is uncertain when in history the name was extended and applied to nearby territories. Originally the name of the territory corresponding to present Abruzzo and Molise was known as Savinium or Samnium. The italic peoples that inhabited this large territory occupied the whole of present day Abruzzo, and were surrounded by the Aequi and Ernici, Sabinia, and Campania. They were divided into tribes called Praetutii, Vestini, Marrucini, Frentani, Paeligni and Marsi. Their economy was both agricultural and pastoral. The sea did not invite them to trade nor did it attract foreign peoples to establish colonies along the coast: the harbors were better suited to fishing than trade.

The earliest Abruzzese towns must surely have been small settlements which formed autonomous political communities including the fields around (agri). If there existed an originary culture, it was soon influenced by more civilized nearby populations such as the Etruscans, the Campani or the Magna Grecia colonies, from where other colonizers came. Hadria (present-day Atri) for example was founded - or already existed and was occupied - by an Etruscan colony. For centuries Rome strove to conquer or tame these fierce tribes, which were later to help Rome greatly in its future enterprises.

Whenever we attempt to speak about these groups individually, we not only find it difficult to trace their separate histories but also to identify the area they inhabited and the sites of their settlements. However, we shall endeavour to reconcile all of the different and contrasting historical opinions and establish some firm points also on the basis of the latest discoveries."

Translation into English 1998-1999 by the Abruzzo World Club team with the help of Peter Ianni. All rights reserved.
A Map of the Abruzzo populations in Roman times 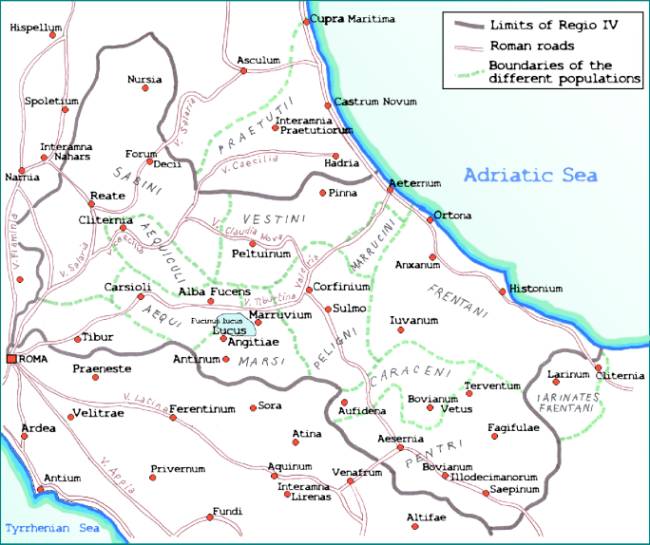