Character and customs of the inhabitants of Abruzzi

From Enrico Abbate's "Guida d'Abruzzo", Rome 1903, Chapter IX. Below is the first English translation of this chapter. The Italian text might seem a bit old-fashioned, but it was written over a century ago. The people that Professor Abbate described were those of the years of the massive emigration.
Follow Italy Heritage on Facebook 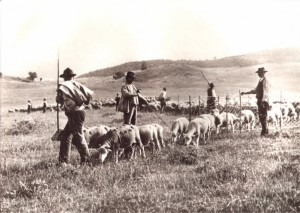 Visitors to the mountains of Abruzzi are still amazed to see customs and people that remind of the ancient glorious times. Enclosed by mountains, until not long ago deemed almost inaccessible, forced by the harsh climate, the rugged places, the crude long winters and lack of any means of communication, to temperance and assiduous work, victims for centuries of barons' arrogance, the clergy's intolerance, the games of suspicious dynasties, the people of Abruzzi, though naturally industrious, lived for a long time almost unaware of any human security, poor on a fertile soil, almost excluded from contacts with neighboring populations, exposed to robbers, who at various times found refuge among Abruzzo mountain ranges.

But amid all this, the descendants of the heroic tribes of the Marsi, Vestini, Frentani, Marruccini, Peligni, are preserved in their wholeness; along with the ancient strength they maintained the sobriety of agricultural and pastoral life, and one day, whenever necessary, the proud Abruzzese mountaineer will renew the courage of the ancient Marsi people for the new-born Italy.

Moreover, under an ethnographic point of view, it is a unique feature of Abruzzi that there exist certain enclaves of Slavs, Albanians, Dalmatians and even gypsy populations, by now merged with the local inhabitants, because the law prohibits loitering; the name of the small town of Schiavi d'Abruzzo, as well as similar instances, are a proof. At Scanno there is a virtually intact, ancient Greek colony, as in Francavilla, Acri, Casacanditella, Forcabobolina, where in the customs and characters of the inhabitants or in some words, undoubted traces of Montenegro settlements can be recognized.

Outside these enclaves the ethnographic character is that of the ancient peoples. The Abruzzese, says Matteo De Augustinis in his Memories, can be easily recognized among all the inhabitants of the kingdom thanks to the strength and size of the figure, the reddish-temperamental hue of the complexion, the calm gaze, and the elegant simplicity of his speech. He is not cold or unfeeling, but cannot be strongly moved or easily made angry; he loves reflection and calculation, and is the most thoughtful of all; he wants to convince himself, but once persuaded, his determination is ready and irrevocable; he is not quarrelsome, but more than anyone else he wants to tell his mind and explain his motives; he is not self-confident, but nevertheless he is wary and suspicious of others. Not to anger but to disdain he more easily gives way, and on these occasions his language becomes threatening and haughty, nor he lacks the courage to pass to action; in short, he is more intrepid than bold.

The Abruzzese wit is not subtle and quick as for the Calabrese, but wins in clarity and convenience; his mind is quiet and orderly, his advice rational and mature. Diligent, industrious, capable of any effort and hardship, the Abruzzese keeps no hope and easily despairs. He wants plenty of food for his need, not for greed, and to this you must add that since birth he was educated to parsimony, and made expert and prudent by the harsh weather, the rugged sites and the length of winter, he rejects poverty and bad luck: the Abruzzese admits neither poverty nor begging or complaints. He has little, and keeps it with care, is a friend but without concern, is affectionate but without passion. Religion itself he wants to be without pomp or donations. The Abruzzese, forced by the hard winter, comes out of his area and lives outside his native village willingly, however there is not one that does not come back; he likes to see the place again and rest finally there.

Not to speak about money, he, industrious and fond of work, loves the fields, the flock, the family, and neither time nor distance break or weaken his ties. To agricultural work, though he has not yet introduced those improvements that progress suggests, he devotes himself with special care and leaves no yard of uncultivated land from which profit can be made, accomplishing difficult results with few resources. Enclosed in the circle of his rugged mountains, forced to live in solitude most of the year, when he sees some foreigner he is driven by his open and kind nature to be respectful and deferential towards him, offering a hospitality which has become proverbial, full of concern and care, not pretended, but sincere and decent.

Whether because of nature or necessity, Abruzzese women are the rulers of the home; their power, however, is a natural consequence of the great care they have for the home and the burden they carry; they are excellent housekeepers, since they know very well how to work and manage any needs. The Abruzzese woman is very appreciated for her physical features above all. The whiteness of her complexion, the delicacy and vivacity of color, the grace of her movements, the serenity of her face, the sweetness of her eyes and goodness of manners conquer all hearts.

Tall stature, strong limbs, adorned by fine forms and sweet, lively features, which show openly the sincere soul, and the quick, penetrating mind, love of hard work and steady pursuit in bearing hardships cheerfully, are essentially the typical qualities of the good, industrious inhabitants of Abruzzo.

In the villages in the mountains, from the end of September until the beginning of June, men lead their flocks out of Abruzzo, and when outside the walls of Rome, in the midst of wide pastures, a tinkling of bells is heard to warn that a flock of sheep is not too far away, you will see a shepherd from Abruzzo leading; he is there straight as a rock, so strong and robust to engender wonder and envy at the same time, and he challenges the wind, cold, and rain. He migrates twice a year from the plains to the highest peaks of the Apennines and eats bread alone. Patient, loyal to his duty to the utmost, poorly paid, away from family, he looks after his sheep and reads Ariosto or Tasso; he is the virgin prototype of Abruzzese people, who, with their keen mind, sobriety, hard work honor Italy.

In the absence of men, women either go and seek work in neighboring provinces and with manly prudence take care of the house, children and elderly, and provide the garments to the family for all seasons of the year by spinning and weaving with their hands and dyeing the cloth with nice colors extracted from the plants of their native mountains.

In the more mountainous parts of the region, among the majestic rocks surrounding smiling valleys, the quietness of nature is in harmony with the controlled passions of the quiet inhabitants. Almost isolated from the rest of the world and happy to provide to their few needs with the fruits of the earth, that they make fertile with their sweat, they offer a true picture of the ancient patriarchal family.