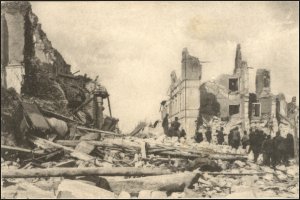 13 January 1915, 7.50 am ... It was going to be a clear, terse morning, after a rigid winter night beaten by the Northern wind that had been blowing with crazy violence until dawn ... At 7.30 I was sent to my grandmother's, along the Corso at that time there was no one ... I came back home, and I found Nicola and Gaetano (the writer's brother and cousin) sitting by the fireplace ... while mother was busy preparing milk and coffee for me and my brother Mario, who should have gone to school right after.

Not a quarter of an hour had passed when the old earth strated to shake with all its mountains, with such force that the very hinges of the world seemed about to fall down. From mysterious depths a roar was rising, to which another roar replied from the frightened mountains, and the roars filled the caves of the earth and the immensity of the skies, where the sun was looking down at a huge cloud of mourning. Afterwards, things lost their names to become a confused heap of debris, a multi-souled life vanished.

A heavy pressure, caused by a wooden beam on the left side of my chest woke me up; I couldn't say how long I was buried, senseless; but as soon as I was awake, at once came back to my mind the furious, diabolic, deafening dance of my house, our screams, and my poor mother praying St. Emidio, the formidable jumps of the opposite palace seen from the window, everythin in a monstrous flashing moment; I felt great pain, and shouted for help.

Gaetano e Nicola, out of the ruins unhurt, for some inexplicable case, were already at rescue and in less than an hour could take out of the ruins my mother, my sister Anna, my brother Mario and me. Of our poor father, who was in another room in the terrible moment when the house came down, not a lament, not a word was heard, though we called and called; and in the smae way we called and called our good neighbours don Berardino Toccotelli, wis wife donna Leonilde, their children living opposite, and donna Alfonsina Corbi and her daughter Vincenzina, who lived beside and were alone since the other children Francesco and Tommaso were away, career officers, and Leandro was not a home at the moment.

A terrifying sight appeared to my eyes: the greyish, huge cloud that some from the suburbs had seen hovering over the city had dissolved, leaving in the air a bitter unmistakeable smell of old plaster that through the nostrils seemed to invade soul and body with the feeling of death all around. I raised my eyes towards the poor houses in pieces, and was struck by the sight of San Bartolomeo, mutilated, that vainly tried to rise towards the sky from the huge, whitish desert of stones, slightly higher. My child's mind was shattered still deeper by the astonishment for the fall of that giant, which I believed indestructible.