The Magi and the Legend of Arrogance [A Christmas Fable]

"Far away, a humble hut could be seen shining. The Child Jesus was between the donkey and the ox. Mary and Joseph were contemplating him, and kissed him every now and then". Antonio De Nino (1833 - 1907) is searching, it is around 1883, for folk documents on the Epiphany and its myths; he collects fragments of the oral tradition around the event of the "gift" and the meanings that the feast carries along, deep, archaic, addressed to the children today.
Versione Italiana ➩ 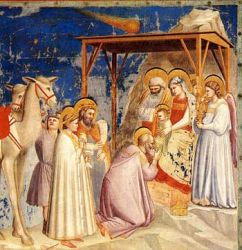 «... The shepherds came, - the legend continues - the gifts were in abundance: someone carried one little sheep, another a caciocavallo (cheese), someone the scamorze, another one little basket of eggs.» From Petransieri to Rivisondoli; from Pescocostanzo to Roccaraso the folk tale takes shape, collects and joins fragments of the oral tradition, and finally models itself also on the local products of the breeders that are offered by the shepherds to Jesus, as the abruzzese tradition requires.

De Nino travels, moves, always in search of an ancient Christianity, but perhaps for something more ancient still, into pagan mythology, the Epiphany, the arrival of the god in human shape coming down from the heavens to the earth. He dominates the spirit, enters the cities and marks the landscape, with all his glory and power that is exactly "the yearly return of Apollo in Greece - Alfonso Di Nola writes -, and Epiphany was said the ritual of the entrance of kings and the princes in the cities. In Christianity, in its remotest meanings, there was this overlapping myth of the children waiting to receive gifts ". The legend of De Nino continues.

"...Here they come, the Magi Kings too. They were three: one carried gold, one incense and one myrrh. They wanted to offer these gifts to the Child Jesus. Along the way they had been quarreling about who was to be the first to present the gift. The one who carried gold wanted to be the first. And he said: "gold is more precious than either myrrh or incense: therefore I must be the first".

The others finally gave up. When they entered the hut, the first to come forward was therefore the King with the gold. He knelt down before the Child; and behind him knelt the two with incense and myrrh. Child Jesus placed his hand on the head of the King who offered Him the gold, as if he wanted to lower his arrogance; he refused the gold; and he accepted only incense and myrrh, saying: "gold is not for me! ".

The legend finishes its "journey", on a plan purely inspired to the wisdom of folk culture, to the refusal of wealth, the ability to make choices, the people's understanding of a world above all made of their own irrenounceable icons, which are turned into tales "... When the King - the story concludes - with the gold rose again on his feet, he had become a dwarf.

Arrogance and power therefore, that someone, in Scanno, in that area full of myths and symbols going as far as the Five Miles plateau, on the night of Epiphany eve, would symbolically fight, hanging under the windows the "good omens" that remind after all the symbols of a fable modeled around the local community on the ancient night of a never extinguished folk tradition: the stockings filled with gifts, that surely will not contain gold.