That manger with the many little huts [A Christmas Fable]

The incense with its thin, balsamic, warm, wood-scented, pervasive, fragrant smoke, like an aromatic cloud, came from the mountain tops gently sloping down to the Red Sea coasts. It had the power to sweeten bitterness, as the ritual says, to transform pain and sorrows into bearable moments; incense, which was prescribed to Moses for perfumes and used also by the ancient Greeks and Egyptians in their temples, which emanated this sweet smell offered in several ways - a timeless liturgy.
Versione Italiana ➩ 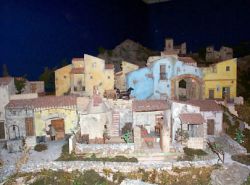 Then myrrh, that was used to cover the death smell, a resinous and balsamic scent used to soothe passion, with its many different qualities, acrid and warm, assured that bodies would not rot, something infinite, like the soul; in spring it dripped from the holes of the tree barks used for mummifying and embalming. These heaven's resins, valuable, aromatic balsams, transcended pain and death, celebrating the triumph of being no more. And finally gold that symbolized royalty, the first metal known by man since prehistoric times.

All this carried along the magi, priests of a chaste primitive religion, but according late Greek sources also astrologers, fortune tellers and magicians. Once they came to the plain, tells a story that might also be a Christmas tale set against a starry sky, in the freezing air, and on a snowy land as never before, the Magi were moving slowly, symbols of immortality with their resins, but above all of that solidarity that will never define borders; and they walked here too, carrying along a great crowd of peasants, shepherds, carpenters, blacksmiths, woodcutters, farriers and many others in that terrible winter of 1944.

These people were driven by an ancient brotherhood law, aid, compassion towards those "poor Christs", within those small huts, in that great manger which was by then the Peligna valley, on one special Christmas in 1944, "Hidden in many huts in the Corfinio countryside, lived the fugitive British, frightened, freezing, despairing - so goes the story.

My grandfather and my father would prepare a basket with bread, cheese, some soup, a little wine and vegetables and carried it secretly, being careful not to be seen, into the fields, to the huts used in the summer by peasants to store their tools, wooden huts with tin roofs. They spoke with gestures. A young man was crying, I remember, for that brotherhood token". Around and within the villages of the Peligna manger were the Germans, the occupation, the Fascists, never-ending bombings, misery, terror and few certainties.

"The peasants used to wear their watering boots - he goes on - and they used them to open their way in the snow. To the English they gave blankets and old coats, straw, someone prepared a sack and filled it with corn leaves, in order to make a straw mattress. Hundreds and hundreds of people helped them, and not only in Corfinio. With great sacrifice they saved many English lives ". Of many nothing more was heard, they possibly did not make it, but someone came back to see again those huts, those places, to find those people and continue to tell this story so much like a Christmas tale, a tale that is difficult to forget.