"That day of Christmas, as Cristostomo says, while the magi were adoring on top of a mountain, a star appeared to them nearby, which had the shape of a very beautiful youth, and on his head a cross was shining, which speaking to the magi, said to them: «Go to Judea, and adore there the youth just born...»
Versione Italiana ➩ 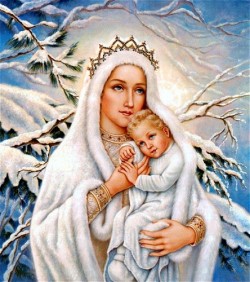 And Jacopo from Varazze, a Dominican friar from Varagine (province of Savona) that writes, in a mythical, at times legendary style, in his "historical novel", which became a real medieval best seller: "The golden legend " or "legenda sanctorum" (1255 -1266), a collection of stories and daring interpretations, full of erudition and austerity, but including also colorful annotations, for that time, addressed mainly to the common people, ironical, smiling, and so successful that, apart from being translated into "vulgare" (the Italian spoken at that time) the book was amongst the most widely read and studied well into the 18th century.

Its influence was of paramount importance: from visual arts to literature and the theatre, to folk stories that were brought into the villages, the legends of the oral tradition, the fables, the value of the oral communication then was the only instrument of transmission known among the local communities and that can still be heard, uncontaminated, in the magic of our places, especially in this period, in the event of the stories of all the stories, the story of Chistmas.

The three magis are traveling on the crests of mountains of the Gran Sasso, narrates a legend, guided by the star that shows them the way. The first act takes place with the three sisters who were staring at one another from the mountain tops: the Madonna delle Grazie of Castel del Monte, the Madonna della Rocca of Rocca Calascio and the Madonna di Roio who moving from the three statues in wood representing them, began the way with all the precious jewels and gold and the ex-voto offered by the faithful, in order to carry them as gifts to the Child Jesus.

Then it was the turn of many other Madonnas of the villages of the aquilan valley: the Madonna della Strada, dei Sette Dolori, della Salute, della Pietà, del Suffragio, even the Madonna della Libera; and then the Madonna del Soccorso, of the Tre Garofani, of the Cardellino, of the Seggiola, and many, many others who left the altar pieces and frescos in order to render homage to Mary in the "Holy Night".

But also an unknown Madonna set out on her journey. She was living in a holy chapel in the valley of a mountain, along a steep path where only shepherds or woodcutters would go. She had lived long within the niche only receiving mountain mint, some spring flowers and forest strawberries. Finally she arrived with the others in front of the Holy Family. She kept aside to herself, behind all the others, perhaps because she had the wood eaten by worms and ruined by many and many storms; perhaps because the mantle that covered the wood was colorless and everything showed her poverty, but above all she was embarrassed by all that wealth offered and laying on the ground.

Mary saw her, and called her and asked what was her name; "Madonna of the snow" the young statue replied holding her stiff, bulging apron: and this suddenly opened, without warning, freeing a myriad of snowflakes transformed into white flower petals, an intense scent rose in the air, filling the stable with great wonder of all the other Madonne.

Still today along the slopes of the Gran Sasso around that small stone chapel they say that on Christmas eve the dry bushes bloom at her feet and on that winter night the mountain with its ancient riches is full of perfume again.