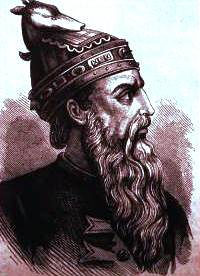 Giorgio Castriota Skanderbeg is the National Hero of Albania. Many museums and monuments are raised in his honour around Albania, and among them the Museum of Skenderbeg in his famous castle in Kruja

Abruzzo | Basilicata | Calabria | Campania | Emilia‑Romagna | Friuli‑Venezia Giulia | Latium | Liguria | Lombardy | Marche | Molise | Piedmont | Puglia | Sardinia | Sicily | Tuscany | Trentino‑Alto Adige | Umbria | Valle d'Aosta | Veneto
Gjergj Kastrioti was born in Kruja from Gjon Kastrioti, lord of Middle Albania, who was obliged by the Ottomans to pay tribute to the Empire. To assure the fidelity of local rulers the Sultan used to take their sons as hostage and bring them up in his court. Gjergj Kastrioti attended military school in the Ottoman Empire and was named Iskander Bey which in Turkish means Lord Alexandre.

He was distinguished as one of the best officers in several Ottoman campaigns both in Asia Minor and in Europe, and the Sultan appointed him General. He even fought against Greeks, Serbs and Hungarians, and some sources says that he used to maintain secret links with Raguse, Venice, Vladislas of Hungary et Alphonse V of Naples. Sultan Murat II gave him the title Vali which made him the General Governor of some provinces in central Albania. He was respected everywhere but he missed his country. In 1443, during the battle against the Hungarians of Hunyadi in Nish (in present day Serbia), he abandoned the Ottoman Army and captured Kruja, his father's seat in middle Albania. Above the castle he rose the Albanian flag, a red flag with the black double-headed eagle, the present-day Albanian flag, and pronounced to his countrymen the famous words: "I have not brought you liberty, I found it here, among you".

He managed to unite all Albanian princes at the town of Lezha (League of Lezha, 1444) and united them under his command to fight against the Turks. During the next 25 years he fought, with forces rarely exceeding 20,000 against the most powerful army of that time and defeated it for 25 years. In 1450 the Turkish army was led by the Sultan Murad II in person, who died after his defeat in the way back. Two other times, in 1466 and 1467, Mehmed II, the conqueror of Constantinople, led the Turkish army himself against Skenderbeg and failed too. The Ottoman Empire attempted to conquer Kruja 24 times and failed all 24 of them.

Skenderbeg's military successes evoked a good deal of interest and admiration of the Papal state, Venice and Naples, themselves threatened by the growing Ottoman power across the Adriatic. The Albanian warrior played his hand with a good deal of political and diplomatic skill in his dealings with the three Italian states. Hoping to strengthen and expand the last Christian bridgehead in the Balkans, they provided Skenderbeg with money, supplies and occasionally with troops. One of his most powerful and consistent supporters was Alfonso the Magnanimous (1416-1458), the Aragone king of Naples, who decided to take Skenderbeg under his protection as vassal in 1451, shortly after the latter had scored his second victory against Murad II. In addition to financial assistance, the King of Naples undertook to supply the Albanian leader with troops, military equipment as well as with sanctuary for himself and his family if such a need should arise.

As an active defender of the Christian cause in the Balkans, Skenderbeg was also closely involved with the politics of four Popes, one of them being Pius II (1458-1464) or Aeneas Sylvius Piccolomini, the Renaissance humanist, writer and diplomat. Profoundly shaken by the fall of Constantinople in 1453, Pius II tried to organise a new crusade against the Turks; consequently he did his best to come to Skenderbeg's aid, as two of his predecessors Nicholas V and Calixtus III, had done before him. This policy was continued by his successor, Paul II,(1464-1473). They gave him the title Athleta Christi.

For a quarter of a century he and his country prevented Turks from invading Catholic Western Europe. After his death from natural causes in 1468 in Lezha, his soldiers resisted the Turks for the next 12 years. In 1480 Albania was finally conquered by the Ottoman Empire. When the Turks found the grave of Skenderbeg in Saint Nicholas church of Lezha, they opened it and held his bones like talismans for luck. In 1480 the Turks invaded Italy and conquered the City of Otranto.

Skanderbeg's posthumous renown was by no means confined to his own country. Voltaire thought the Byzantine Empire would have survived had it possesed a leader of his quality. A number of poets and composers have also drawn inspiration from his military career. The French sixteenth-century poet Ronsard wrote a poem about him and so did the nineteenth-century American poet Longfellow. Antonio Vivaldi, too, composed an opera entitled Scanderbeg.