The "Cervone", a cake for Capodanno

The cake with the green eyes and the red tongue is a greatly decorative preparation typical of Orsogna. Already in ancient Rome, as Ovid (the poet native of Sulmona) tells in his poem Metamorphoses, during the festivals celebrating the new year it was a tradition to offer something in the form of a snake as a gift and a good health wish.
From Nice Cortelli Lucrezi,"Le Ricette della Nonna - L'Arte del Mangiar Bene in Abruzzo", first published 1966 - out of print - Translated and reproduced under authorization of the author's son, Dr. Alfonso Lucrezi - All rights reserved

Ingredients for the dough

Ingredients for the chocolate glacing

Ingredients for the white glacing 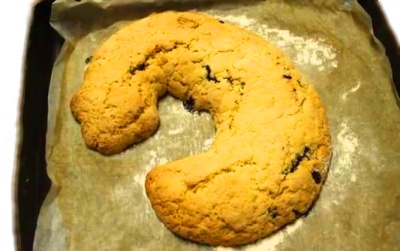 Cook the honey until it starts to boil. Make a fountain with the flour, add sugar, nutmeg, orange peel, cloves, liquor, hot coffee, raising powder, boiling honey and mix quickly. After working the dough a little, divide it into two. Work one half in the form of a long loaf, 2cm thick (little less than one inch). In the middle of the loaf, all along its length, lay a long line of jam (that must be quite hard). Then close carefully the long edges of the dough over the jam, so as to close it inside perfectly, with great care and attention. At the ends give the form of a tail and a head. Curl the "snake" and place it on an oiled and floured baking tin. Cut two pieces of the green candied fruit in the form of two eyes, and the red candy in the form of a tongue, and insert them in the snake's head.

Do the same with the other half of the dough, and bake in an already heated oven (180° centigrade) for 20 minutes. Leave the snakes to cool perfectly, and take them out only when completely cold.

Then prepare the glacings. Put the bitter chocolate in pieces in a little pot with the sugar and water. Have a soft kitchen brush ready. When the chocolate is melted and still very hot, brush with it the 2 snakes, then wait for the chocolate on the cakes to solidify.

Background to the recipe

The cervone (Elaphe quatuorlineata , four-lined snake or Bulgarian ratsnake) is an olive-colored snake living in central and southern Italy, that can reach 180 cm (6 feet) in length, and greatly enjoys eating eggs, swallowing them whole and then crushing them inside its stomach rubbing its body against some hard object, like a tree or a stone, then vomits the egg shells. The sides of its head are oblique, and this gives it a fiery aspect, though it is a very meek, quiet snake.

Abruzzo is a land of snakes; every year there is the procession of the "serpari" in Cocullo, on the first Thursday in May, in honor of St Dominick, originary of Foligno but a hermit for long decades in many areas of Abruzzo, a protector against snake and dog bites. St Dominick took on himself in Christian times the ancient pagan cult of Angitia, sister of Medea and Circes, who taught (as Virgil tell in the Aeneid, vol 7) the Marsian people of Luco the art of healing snake bites. These rites, since the snake lives inside the earth, are connected to the cult of Mother earth, to Hesculapius (the god that taught medicine and whose symbol is two intertwined snakes), and to fertility rites in honor of Juno, in whose temples sacred snakes were kept.