"Those unique earrings of our great grandmothers." In the paintings of Abruzzese artists of the 19th century who, according to the Naturalistic style, liked to portray the common people.
And in their paintings the beautiful tanned faces of Abruzzese women appear always adorned of large round ear-rings, usually in the form of a half-moon and with small pendants inside: the "sciacquajje", in the dialect of the Orsogna area. Ear-rings were worn every day, and were traditionally a wedding gift, often from mother in law to bride. 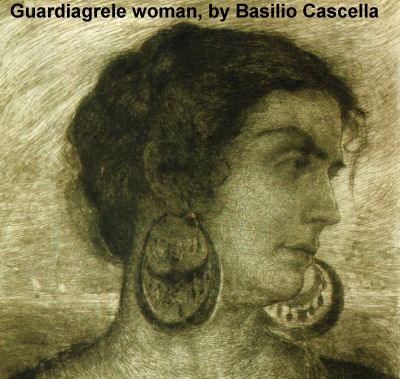 The origin of these earrings was probably Orsogna, though the main production center was Guardiagrele, the heart of the goldsmith's trade. The same, or similar, earrings appear also in Molise, where they are called "palommelle", in the hinterland of Vasto ("celenzene"), in other places where goldsmiths were active, like Pescocostanzo ("cecquàjje") and Scanno ("circéjje" and also in other areas of Southern Italy. 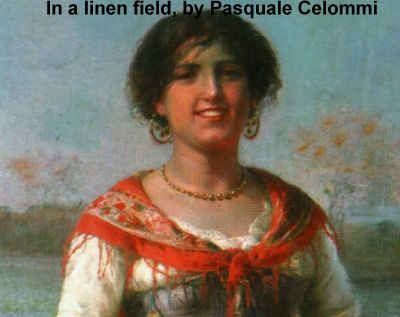 The names of these ear-rings have been found in notary acts for marriage, and in wills of ladies, for many centuries. The ear ring was basically a gold or silver foil, engraved by hand with flower motifs, or a gold or silver fusion in a mold, with very elaborated symbols, and in the cavity of the halfmoon small pendants of different kinds were placed.

Ear-rings, as ornaments and as a protection against the malocchio (evil eye), have been in use since very early civilizations, as shown from statues and archeological findings. The custom of wearing ear-rings is present almost anywhere, in all areas and civilizations, and both for themale and the female sex. Gold was used, as an analogy with the sun, and silver, since it was the metal of the moon. 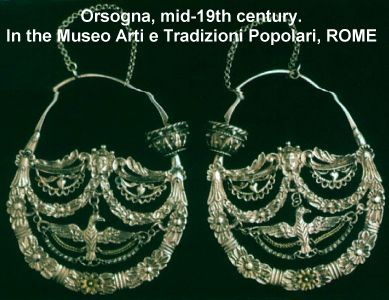 The earliest extant example of the Abruzzese "sciacquajje" date back to the late 18th century, and the name may have been derived from theverb "sciacquare", meaning to agitate the laundry in water to clean it of the soap, possibly for the similarity of the movement, and when for the use of the poorer classes they were made in low-titre gold (12-14 karat) which gave them a typical reddish hue, while rich, elaborate items were reserved for the wealthy ladies. The ear-rings, following the movement of the face and appearing through the hair, gave light and fascination to the face of the woman wearing them.