Roccascalegna is a small town situated at 455 meters above sea level, in a valley right of the Rio Secco, a tributary of the Aventino river, in the inner mountains of the province of Chieti, midway between the mountains and the sea; its inhabitants are called roccolani. The tourist arrives here from the fast lane called "Fondo Valle Sangro", and is astonished at the sight of the castle, rising like a precious jewel encased inside the green hills covered with Mediterranean vegetation.
Written by Nicoletta Travaglini, translated by Abruzzo World Club
Photos by Nicoletta Travaglini - All rights reserved
Follow Italy Heritage on Facebook

The special feature of Roccascalegna is its castle, rising on a rock of limestone, which is connected to a bloody event: the murder of the most cruel, devil-like, violent baron of the castle, Corvo de Corvis, killed by the people of the village in his own castle. Historically, the Baron was at times identified with Annibale Corvi or with a man of the Carrafa family, but in truth his existence is enveloped in the legendary mist of past times.

The fiefdom of Roccascalegna was purchased by the Corvi family from Sulmona in the year 1599, exactly by baron Vincenzo Corvi for 10,000 ducati; Vincenzo was suceeded by Annibale, then the title passed to Giuseppe, to Giovanni Battista, to Annibale III, and finally to Pompeo Filippo who sold it to a noble gentleman of Palena, Don Nicolò Nanni, which ended the saga of the Corvi barons from Sulmona. 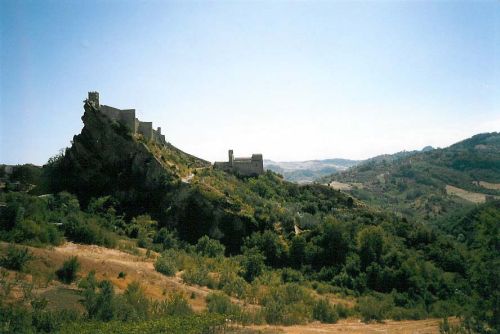 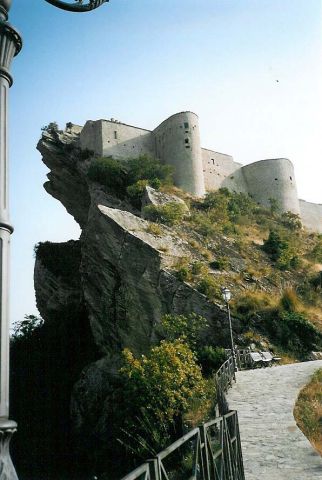 The Legend of the Castle

Baron Corvo de Corvis, who left a deep mark in the imagination of the people of Roccascalegna, lived in the Spanish period, that is in the 16th century; he never stopped exacting taxes of all kinds, and also obliged his subjects to kneel before a raven, black as the darkness surrounding the castle.

The raven was placed in a cage before the castle door, where he could see all the activities of the people and anybody going to or leaving the village had to pass in front of the bird, along the only road leading to the settlement: those who refused to pay homage to the bird were arrested and at times killed.

Many years of terror went by, and the baron, turning forty-five years old, decided to introduce the most hideous of medieval feudal customs, the "Jus primae noctis", which obliged every newly-wed bride to spend her first nuptial night with the Baron. This unjust violent law deeply angered the parish priest, who protested publicly; the Baron then ordered his guards to punish the priest, and the poor courageous man was killed at the entrance of the village, while he was trying to escape.

Time went on, until one winter night a young bride, while the baron was going to lay in bed beside her took out a sharp dagger she had taken with herself and stabbed the Baron in the heart. She fled away in panic, while the dying baron shouted at her horrible curses. The baron's son wanted to take revenge, but the Abbot of San Pancrazio was able to convince him to abandon his bloody purpose.

On the point of death, the Baron placed his bloody hand on the wall on top of his bed, where they say the mark remained until 27 January 1940, when the bedroom fell in ruin with the tower of the castle. They also say that, though in the centuries the people tried to wipe away the scarlet hand, this always came back as red as ever, as for witchcraft.

There is also a story that on stormy nights, when the chilly Northern wind hits the merlons of the castle, and the door creaks, the ghost of the takes possession again of his ancient manor, and is compelled to repeat endlessly his tragic death, in the company of his faithful raven who disappeared with him.

Roccascalegna, whose name is derived most probably from a Lombard lord, is also famous for the Abbey of San Pancrazio, established by Benedictine monks in the ninth century AD as a dependence San Liberatore a Majella, then in 1176 Pope Alessandro III signed a Bull that moved the Abbey to the jurisdiction of San Giovanni in Venere. 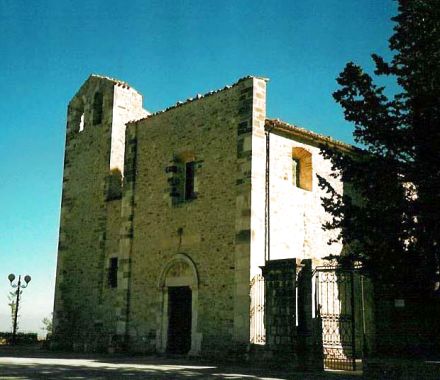 The stone frame of the portal is dated 1205, and was rebuilt probably after an attack of the Saracens. In 1324-1325 the abbey ruled over Roccha Scaregna and the churches of Santa Maria, Sant'Angelo and San Criscentiano (of which no trace is left). In the mid-16th century it was abandoned by the Benedictine monks, probably after a famine or plague, and later became a monastery of the Agostinian order. In the late 16th century it was already almost abandoned, and only in the mid-19th century restoration works allowed to uncover its pristine splendor and beauty.

The Procession and the Cursed Treasure

Many legends are connected to the walls of the old Abbey, possibly because it rises beside the cemetery - it is said that on the night before November 1st inside the church the dead gather for a solemn ceremony. Another legend says that inside an opposite hill brigands buried a treasure on the spot where the shadow of the bell tower fell.