An article by Ezio Pelino, the former Principal of the Liceo Scientifico of Sulmona, promoter and organizer of "The Freedom Trail", inaugurated in 2001 by the then President of the Republic Carlo Azeglio Ciampi.
The event retraced the paths of the Italian Resistance along the Gustav line in the years 1943-1944, and saw the involvement of the students themselves and the publication of volumes of considerable historical interest, such as a Diary of president Ciampi himself, who as a partisan had walked the freedom Trail in Abruzzo. Over the years, the event had been appreciated throughout Italy for its historical, cultural, social and also tourist value, becoming a flagship for the Fermi high school itself. In 2016 the school left the event, that however continues its remarkable activities as Associazione Culturale "Il Sentiero della Libertà/Freedom Trail".
Versione Italiana ➩
Follow Italy Heritage on Facebook

Abruzzo | Basilicata | Calabria | Campania | Emilia‑Romagna | Friuli‑Venezia Giulia | Latium | Liguria | Lombardy | Marche | Molise | Piedmont | Puglia | Sardinia | Sicily | Tuscany | Trentino‑Alto Adige | Umbria | Valle d'Aosta | Veneto
In the darkest days of the Second World War, when fascist Italy, after its boasting conquest of Africa and Russia was broken in two by the Gustav line, a clandestine trail, amid beech-trees, ditches and stony valleys, ideally joined Sulmona to Casoli. A trail that knew the anguishing burden of the travelers, but also their hopes. That was the freedom trail. It went one way only. From north-west to south-east. From the areas still under nazi-fascist oppression to the liberated lands, where democracy was just starting to breathe. It was walked mostly by young men who wanted to escape the fascist conscription and longed to join the allied liberation forces, including partisans and royalists, of the Brigata Majella.

They were former war prisoners who were able to escape concentration camps all over Italy, and namely camp No. 78, at Fonte D'Amore, Sulmona: 80000 disbanded men, who were able to survive only thanks to the help of the local population who, as someone poignantly said, "divise il pane che non c'era" [=shared with them the bread they did not have]. "Libertà sulla Majella" is the Italian title of a famous book, now out of print, published by Vallecchi, written by a South-African writer, Uys Krige, a friend to Ignazio Silone: "The way out". They escaped alone, as told by Donald I. Jones in "Fuga da Sulmona"; more often in groups, as witnessed by John Esmond Fox in "Spaghetti e filo spinato" (=spaghetti and barbed wire). In Sulmona an underground organization was formed that, almost weekly, with the help of local guides led the desperate fugitives towards hope. 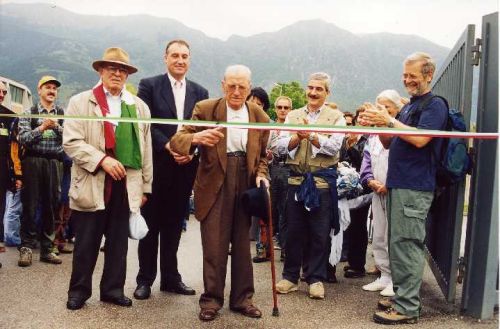 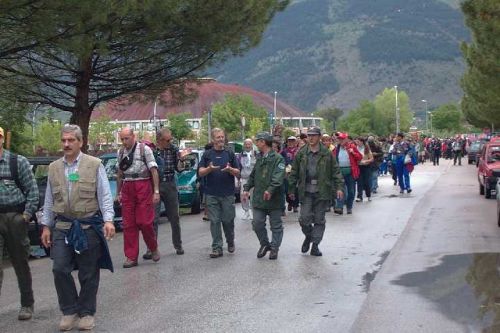 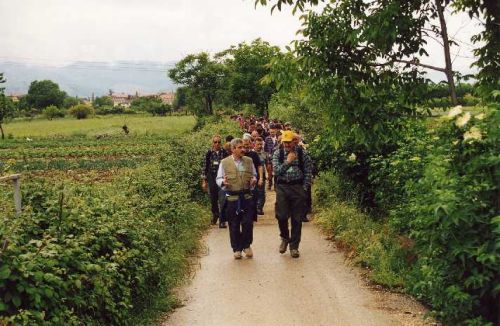 Not always were the "crossings", as they were called, lucky. It was not unusual that the groups were intercepted by German patrols over mountain passes and crests. It is well known now that on 24 march 1944 the present President of the Italian Republic, with Alberto Pietrorazio as his guide and other sixty courageous Italians and foreigners - as the president himself recalls in his diary, donated to the liceo scientifico in Sulmona - through a 25-hour-long night march, in the snow and blizzard, reached Taranta Peligna and then Casoli. By mere chance President Ciampi did not leave with the previous week's expedition, led by Domenico Silvestri. They would have ended up in German hands. The lucky expedition, however, also recorded a dozen missing, and later on Ciampi was put under trial by the Allies for unfounded suspects of collaboration with the Germans. But he, at the time a young lieutenant, was finally able to join in Bari his own restructured battalion, the 9th Autieri. And was able to fulfil the mission entrusted to him by his teacher, philosopher Guido Calogero, kept in confinement in Scanno: deliver to publisher Laterza his manuscript on liberal-socialism. All the time his pupil Ciampi carried it hidden in his socks, a precious contribution to the political debate of the newly rising democracy.

On the days 24, 25, 26 may 2002 the Second Edition of "The Freedom Trail" repeated the ancient route, connecting again the population from the two sides of the Majella: Sulmona, Campo di Giove, Taranta Peligna, Lama, Casoli. Five hundred people, most of them Italian and foreign students, who were joined along by the joyous local population. The bad weather of a crazy spring did not discourage the marchers who, with their mantles and even umbrellas, covered the route in 18 hours. The rain did not allow the ceremony to take place at the march start, as last year in the presence of Carlo Azeglio Ciampi, in Piazza Maggiore, Sulmona. The inauguration was kept instead inside the Sports Palace. 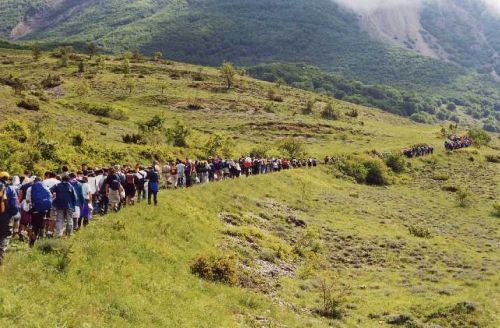 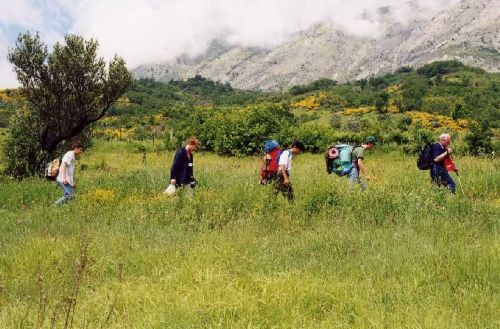 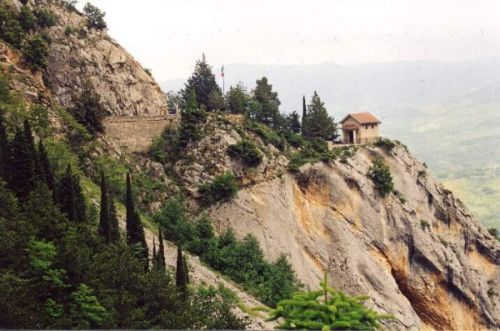 This year's honorary guest Giovanni Bachelet (son of Vittorio, slaughtered years ago by the Red Brigades) faced the hardships of the long march with all his family. His words were deeply meaningful. He said: "My father used to tell me: freedom is never a final conquest: each generation must pay a price to conquer or maintain it. That is what happened to my father, who gave his life to serve the Italian democracy. But since WWII to our days many died in the same way. Yesterday we commemorated a decade from the killing of Giovanni Falcone, his wife and the men of his escort (...) ".

And, addressing the students, "During these years at school, your study especially of history, which this event allows you to understand in a different way by living it, is a fundamental tool. The memory of yesterday is basic to understand who we are today, and where justice and freedom reside; to understand what we can and must do to promote and defend them. I would like to conclude with the words of Antonio Gramsci, who paid for his ideals with long years in prison: you have to study, since we'll need all your intelligence." 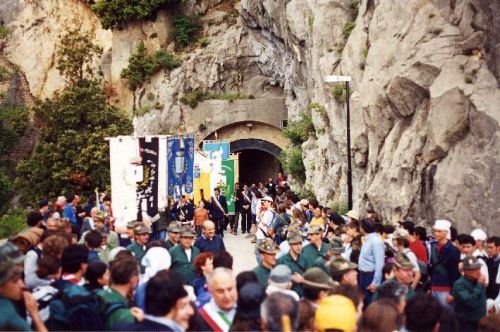 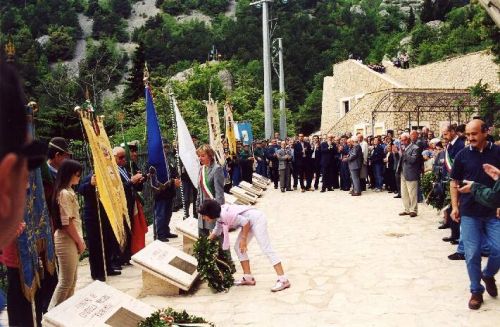 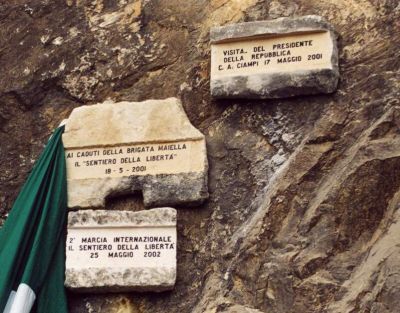 Among the speeches of the foreign guests, the most moving came from the Germans: a bitter self-consciousness of nazism and the war. At Guado di Coccia, before the memorial to Ettore De Corti, the first victim of the freedom trail killed by the Germans on 18 September 1943, the five hundred marchers keep one minute silence, to remember. In the cold wind of the mountain pass. At the Sacrary of the Brigata Majella, in Taranta Peligna, the marchers meet the mayors of Taranta and the nearby villages, the President of the Abruzzo Region, the Vice-Commander of the Brigata Majella.

The mayor's speech is filled with the heartbreaking remembrance of his village, destroyed by the war: the cancellation of the places of his childhood, of the dearest things. A new memorial made in Majella stone is placed onto the rocky wall next to the Sacrary, in memory of the Second Freedom Trail. In the evening, a theatrical performance of poems and chorus songs based on war memories, among the impressive ruins of the church of S. Biagio. Among the authors of the poems and the chorus singers are the mayor, the municipality council and the citizens of Taranta: a whole village. 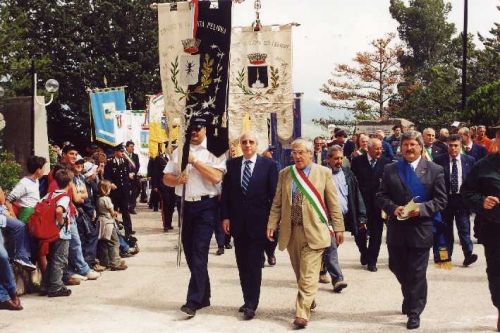 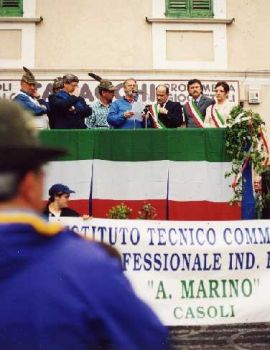 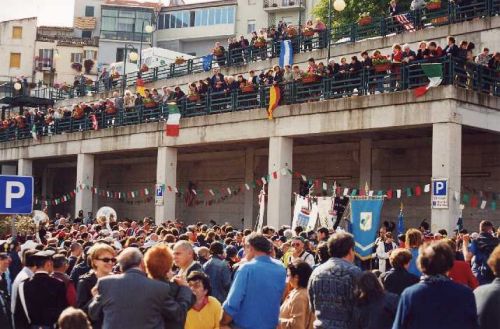 Along the water-rich Aventino river, under a hard rain, the marchers reach Casoli. Just the time for a quick meal, then they parade into the town with the authorities of Casoli and the nearby places, with their green, white and red waistbands, and the representatives of the Province. Heart-felt greetings. No rhetoric: a festive embrace from all the people. The people of Casoli and the surroundings. A large crowd. A general, contagious joy. So many come near, want to speak to the marchers, wand to make friends. From the podium, in the middle of the widespread commotion, the authorities and the promoters speak of the historical and ideal meaning of the event. Just one flaw this year, the President of the Republic did not come, as expressed in the words of Casoli's mayor: Casoli saw Ciampi as a fugitive, Casoli wants to greet him as President.

Dinner all together in the square: marchers and "casolani". We are over fifteen hundred. We make friends. We remember. Our weariness disappears in a dance.

So this is the closing of three days amid the mountains of Abruzzo, for a "life's experience". For a hope. A dream. Appointment to next year. The Freedom Trail, as an idea and as a reality, wants to be a metaphor of man's walk towards freedom from the tragedies of the past and any form of slavery in the present. A moment for reflection and involvement, so that man will no more be enemy to another man. The Freedom Trail is a chance: to each the task of making it real.