The Veneration of St. Michael in Caves

Since time immemorial numerous caves in Abruzzo and Molise were used as places of worship, then became churches or small sanctuaries dedicated to Saint Michael Archangel, more commonly known as Sant'Angelo.

The cult of this saint, or better angel, protector of the Lombard populations, was imported from the near East and spread through center and southern Italy. The connection between Saint Michael and the caves is easy to explain: the tradition wants the archangel winning on Lucifer, the devil, who was sent away from the heaven to be confined in the inside recess of the earth. 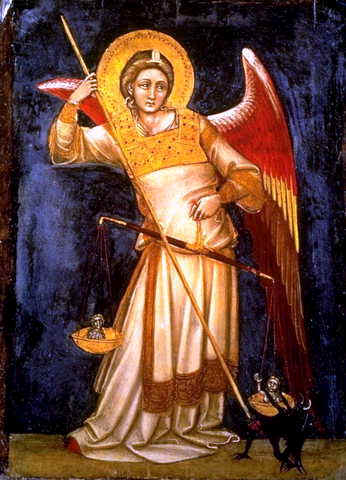 Here are the names of the caves in Abruzzo and Molise dedicated to S.Angelo or Saint Michael:

The cave is located at the bottom of a rock wall hovering on the deep valley of Sant'Angelo, to north-eastward of Balsorano. The entrance, 3m high and 10m large is closed by a huge gate. The wide inner space is on two levels connected with two flights of steps. Altars, chapels and frescoesenrich the cave, as proof of the continuity of the worship through the centuries. Mention of this cavern are in a bull by Boniface VIII dated 1296 AD, through which the sanctuary-cave passed from the Benedictine monks of the order of St. Benedict to the dioceses of Sora. That means the church existed already long time before.

There is a legend that in 1200 the cave was chosen as hideaway by one Angelo after he had committed a murder; he converted himself, he lived there as a hermit, frequently visited by numerous pilgrims.

The cave, located on the edge of the Karst plateau of Pescocostanzo, known as "Quarto Grande", is closed by a façade in masonry on which two elegant Renaissance portals open. The sanctuary, existing already in 1183 and rebuilt in the late 16th century, had a marble altar, a decorated baluster and the floor entirely covered by square stone slabs. Annexed to the small church there is an interesting hermitage, with two rooms on different levels.

Until the second world war two important feasts were celebrated here on May 8 and on September 29: in the cave the pilgrims picked up a pebble that they preserved till the feast of the following year. During the second world war, for its strategic position, it was used as a shelter and as military base, which caused its decadence and abandonment.

The church of Sant'Angelo in Vetulis is situated along the road that from Sulmona leads toward Pacentro. The sanctuary built partly in the cave and part in masonry, has interesting architectural elements. The temple existed already in the 11th century and in the 14th is mentioned as a church of Sulmona.

The church of Monte Sant'Angelo is a small cave closed by a wall. Inside, on the left, neara circular opening in the rock, there is an altar. At the end of the cave, behind a wall a cistern is located. The flooring is in stone.

The tradition says that San Tussio, who gave later his name to a nearby village, passed here part of his life as a hermit and that he hosted also San Pellegrino, the saint to whom the marvelous church of Bominaco is dedicated. The folk legend identifies in some hollows in the cave the footprints of Saint Michael and of the devil.

The main feature of this church is that it was not dug out of a cave, but built on catacombs. In 763 AD it was already standing and was dedicated to San Vittorino. In a document of 1084 it is mentioned as dedicated to Saint Michael Archangel then it took back the name of San Vittorino in the early 12th century. The folk tradition identifies the water dripping, typical of the period that goes from April to August, with a miraculous manna, work of San Vittorino, able to cure some diseases.

Also called "Romitorio di San Michele", located on the slopes of the Montagna dei Fiori, it is the largest cave in Abruzzo dedicated to this worship. Inside it is characterized by a number of environments. The entry, closed by a gate, leads into a room on which are various dug-out cells, used by the hermits. From here you can go to a bigger room, illuminated by a wide opening, where an altar dated 1236 is located. From here a number of environment and tunnels depart, one of which is called "passage of the goat"; the tradition narrates that a goat went into the cave and crossing all the mountain went out on the opposite part. In this place numerous prehistoric remains belonging to different cultures were found.

The cave is located at about 1300 m on the south slope of the Maiella, in the territory of Lama dei Peligni. It is a little cavern, closed by a masonry. Inside there is a practically destroyed altar on which there was once a terracotta statue of Sant'Angelo. There is a legend connected to the missing statue: a woodsman took hiding in the cave during a storm. The bad weather lasted for three days; the woodsman threatened the saint that if he did not stop the continuous rains he would destroy the terracotta statue. Sant'Angelo did not listen to the man's prayers. When the next day the weather returned calm, some shepherds found the fragments of the statue next to the woodsman's dead body.

In Sant'Angelo in Grotte there is perhaps the most important among the sanctuaries dedicated to Saint Michael in Molise. The name of the suburb derives from the cave placed at the entrance of the village. Also in this case to the cavern a part in masonry was added, conferring to the environment an almost regular aspect. Inside there is a cistern and burrow that is supposed to have its exit on the other side of the mountain.