Holy Week and Easter in Abruzzo

The so-called Holy Week starts from Palm Sunday, the day on which the arrival of Jesus is celebrated in Jerusalem, and ends with Easter, which celebrates the resurrection of Jesus Christ. Easter is a mobile festivity based on the lunar cycle; therefore, every year it changes since it is on the Sunday following the first full moon of spring.
Due to its importance for Christians, it is characterized by rites distributed all over the eight days. During the Holy Week and Easter time in every city and town of Abruzzo sacred and religious representations take place, changing according to the place. Below are the most meaningful events.
Versione Italiana ➩

On Holy Thursday the choristers of the passion go from house to house, in the villages and countryside, singing "Lu ggiuveddi sande" or "La Madonne de lu ggiuveddi sande" or "lu lamente de la Madonne", alternated lines sung by two or more choristers and accompanied usually by a barrel organ, an accordion or violin. The songs vary from one place to another, but they have the same subject-matter. One of the most ancient compositions is the thirteenth-century "Lamentatio Beate Marie de Filio", whose manuscript is preserved in the Museum of Sacred Art in L'Aquila.

In Gessopalena (CH), on Wednesday and Friday there are processions and real life scenes against the unbelievable background of the ancient borough. Fascinating is the live passion on Holy Wednesday: all the inhabitants of the town take part, performing in scenes from Christ passion. The performance ends with the Crucifixion and the weeping of the three Marys.

Among all the processions of Holy Friday in Abruzzo, perhaps that in Chieti shows the most solemn and sumptuous staging. The procession is organized by the Confraternita della Buona Morte, with the participation of other associations. All the "brethrens" wear their congregation customs: all are hooded as a sign of mourning and penitence; the women, united in other sisterhoods, wear black robes. The bearers of the statues walk in the same manner during all the procession: the rhythm is measured by the "troccola", a wooden musical instrument that during the Holy Week replaces the sound of the bells. Very moving is the "Miserere" composed by the Theatine musician Saverio Selecchy (who lived between the 18th and the 19th centuries), sung by only manly voices and accompanied by one hundred violins.

In Teramo on Holy Friday morning there is a procession called "Desolata", whose origin goes back to 1260. It is the representation of the mother desperately searching her son sentenced to death. During the procession, the statue of the Sorrowful Mary is carried by some veiled, mourning women, through an itinerary called of the "Seven Churches", starting from Sant'Agostino and ending at the church of the Annunziata where the statue finds Christ lying dead inside in an artistic coffin.

In 1954 the ancient tradition of the procession of the dead Christ was restablished in L'Aquila; a great feature of this procession are the statues in modern art, many of which created by Remo Brindisi, a well-known Italian artist. To increase the suggestion and solemnity, the Miserere is sung by a choral group accompanied by an orchestra of violins.

Established in 1570, the Procession of the Dead Christ is important for the presence of a 1860 precious, embroidered blanket, on which the Dead Christ lies, and by the drum, giving the rhythm to the procession, which is called "Lu tamorre scurdate" (=the drum without a chord), because it is deprived of the vibrating chord.

The "Bongiorno" (Good-Day Greeting) is an ancient tradition that draws origin from the "gift", that the Longobard Lords pretended from their vassals. Throughout Easter Day and the night before Easter Monday, singers and performers in medieval customs, accompanied by trumpets, drums and cymbals, go along the streets of the town, offering their regards the "good morning" under the windows of the citizens starting from the most important, as the mayor and other authorities. The songs are, generally, impromptu and adapted to the circumstances and to the addressees.

The most famous Easter event in Abruzzo, the Madonna che scappa, is based on century-old traditions and consists in the reconstruction of the apparition of the Resurrected Christ to the Virgin Mary. The Virgin Mary, wearing mourning robes from Holy Friday, goes out from the church of San Filippo and, escorted by the statues of Saint John and Saint Peter who came to announce that Christ is risen from the Dead, proceeds towards the statue of Christ, at first slowly because she still does not believe in the news. The statue of the Resurrected Christ remains in wait under one of the arcs of the medieval aqueduct. 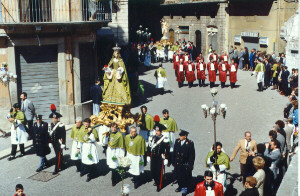 It is the most expected moment by the crowd. The carriers lift the statue of the Virgin and start a frantic run till the statue of Mary reaches that of her Son; when the run begins, the black mourning robe that covers the statue falls down and 12 white pigeons fly free in the sky as a sign of peace. The kind of run, the falling down of the veil, the flight of the pigeons are closely watched to draw auspice for the social life of the city and the surrounding villages.

In the early 18th century a little Italian-Albanian colony settled in Villa Badessa, a hamlet of the commune of Rosciano. Still today the Albanians of this small village preserve their idiom and continue to follow the liturgy of Greek-Byzantine rite. The ceremonies begin with the "enkomia", the weeping of the women during the night time vigil on the icon of the deposition of Christ.

During the night hours before Easter Sunday, the papas, bringing the icon of the Resurrection, goes out of the church leading the procession; the believers follow him shedding light with candles in the last night hours. At dawn the papas sings the first line of Saint John's Gospel and, tuning up joyous songs, leads the procession back into the small church.