St. Gabriel of the Sorrowful Virgin 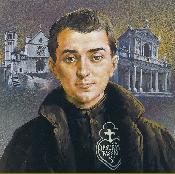 Gabriel was born from an aristocratic family in Assisi on 1 March 1838, the eleventh of thirteen children of Sante Possenti, the mayor of the city, and Agnese Frisciotti. At home he used to be called Checchino.
In the 1841 Sante was appointed alderman to the court of Spoleto (Perugia), where he moved with all the family. Here Agnese, not yet 42 years old, died. Gabriele was intelligent and exuberant, liked to study, was brilliant above all in the literary subjects. He composed poems in Latin, in school plays was always a protagonist, and was awarded a great many school prizes.
Versione Italiana ➩
Follow Italy Heritage on Facebook

Abruzzo | Basilicata | Calabria | Campania | Emilia‑Romagna | Friuli‑Venezia Giulia | Latium | Liguria | Lombardy | Marche | Molise | Piedmont | Puglia | Sardinia | Sicily | Tuscany | Trentino‑Alto Adige | Umbria | Valle d'Aosta | Veneto
Elegant, vivacious, friendly, he became a point of attraction for his joyfulness. He liked to follow the fashion and was always dressed elegantly. Aiming at excellence in everything, he liked the "good life". He was the soul of fashionable parties in Spoleto, read novels and liked the authors of the time, Manzoni, Grossi, Tommaseo. But he also had a good heart, a sensitive, generous mind, caring for the sufferings of the poor, and loved to pray. He was full of life, and many a girl started dreaming of him. He was more elegant than ever in the dancing rooms and meeting places, a handsome young man, and full aware of it.

The repeated family deaths and serious illnesses showed him however how short and empty human joys actually were. On August 22 1856, during a procession, when the image of the Virgin Mary from the cathedral was passing before him, he heard clear and powerful in his heart the words: "Francesco, what have you to do with the world? Follow your vocation!"

He chose to enter the passionists, a religious order founded in 1720 by Saint Paul della Croce with the purpose to announce, through contemplative life and apostolate, the love of God as revealed in the passion of Christ.

At 18 years of age Francesco turned a page in his life, and even changed his name: from then on he was called Gabriel of the Addolorata. On July 10 1859 he arrived in the convent of the passionists in Isola del Gran Sasso (Teramo) to get ready to priesthood with the study of theology. In 1861, in cathedral of Penne (Pescara), he was tonsured and took the Minor Orders.

In late 1861 he fell ill with tuberculosis; every therapy was in vain. He was non able to become priest also because political problems prevented new ordinations to be made. Gabriel realized that there was nothing to do. On February 27, 1862 morning "at sunrise" Gabriel said goodbye to all, promised to remember them in heaven, begged for pardon and prayers. 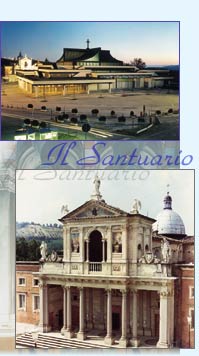 In 1866 the Passionist community in Isola was forced to abandon the convent at the feet of the Gran Sasso, on account of the decree of suppression of religious orders. The grave of Gabriel seemed abandoned forever, but it was not so.

A second phase begins in 1892, thirty years after Gabriel's death, when on his grave the first exceptional prodigies take place. On 17 and 18 October 1892 his body was exhumed under close surveillance of the local people who wanted to hear nothing of a transfer of the remains in the convent of the Madonna della Stella, near to Spoleto (as the order of the Fathers superior required). The church and surroundings and all access roads were controlled by the people and the remains could not be transferred. So Gabriel stayed in Abruzzo and from then on an endless chain of miracles and prodigies started.

Gabriel was proclaimed a Saint by Benedict XV in 1920. In 1926 he became joint patron of the Italian Catholic youth and in 1959 Pope John XXIII declared him the patron of Abruzzo. Saint Gabriel is first of all the saint of youth. Every year thousand of young people visit his sanctuary for prayer. In early March, thousands of secondary school students from Abruzzo and nearby regions come to the sanctuary for a day of spirituality, asking for protection during their final exams. In the last week August thousands of youths from all over Italy camp for four days outside the sanctuary for the Tendopoli (=City of Tents), a great Youth Festival.