ItalyHeritage ⇒ January 2002 ⇒ On the edge of the Laga Mountains

On the edge of the Laga Mountains

The suggested itinerary proceeds amid the forested, little known area between the North-Eastern edge of the Monti della Laga and the Monti Gemelli, in the natural Reserve of the Gole del Salinello, to discover ancient abandoned hamlets.
It is a diary of an actual excursion made in October 1998 by Ugo Ianni, trekking guide and escort, a member of the Club Alpino Italiano dell'Aquila.
Versione Italiana ➩
Follow Italy Heritage on Facebook

The "Monti della Laga" is a large mountain group in Northern Abruzzo, almost attached to the Gran Sasso range from which is separated only by the valley of the Vomano river, but totally different for its geological and morphological features.

In these mountains there is a dominance of sandstone formations, whereas the Gran Sasso is mainly limestones; that is why this range has rounded outlines and are so green, without the rugged rock walls and steep, impervious summits typical of the Gran Sasso. Besides, the compactness and the impermeability of the sandstone rocks has determined an abundance of torrents and of numerous, spectacular waterfalls, often hidden deep among magnificent woods of beeches and fir trees. The highest top is the Monte Gorzano, which reaches a height of 2455 meters.

The "Monti Gemelli" (=twin mountains), that is the Montagna dei Fiori (1676 m a.s.l.) and the Montagna di Campli (1720 m a.s.l.), are two characteristic summits made of calcareous rock, at the edge of the Laga mountain range, very similar in altitude and morphology, separated by the spectacular "Gole del Salinello", a canyon of wild beauty, certainly one of the most striking landscapes in the National Park Gran Sasso - Monti della Laga.

The itinerary proceeds through a little known - also to excursion lovers - area, which is however of great interest for both the nature lover and the cultural historian. Departure for the excursion is Leofara, a small mountain center, famous for a typical Chestnut Festival, which takes place every autumn. Leofara is easily reached following state road no. 81 Teramo - Ascoli Piceno, and driving, after the junction taking to Campli, towards the small center of Macchia da Sole, a very typical hamlet inside the Natural Reserve Gole del Salinello. 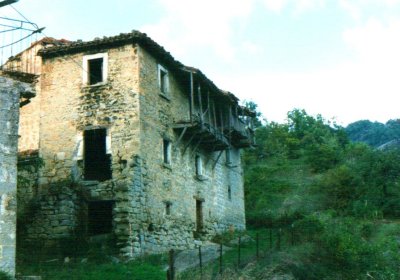 Leofara is a few km away from Macchia da Sole. Once in Leofara, you should not miss the opportunity of visiting this small, attractive and highly picturesque mountain village, whose origin goes back to the Middle Ages. 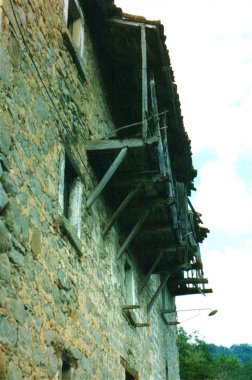 The current buildings are prevalently nineteenth-century, with some 18th century houses in ruin; besides, on a few houses it is possible to see some peculiar structures, such as remains of "gafii" (balconies in wood, typical of northern and Longobard architecture), and a tower-house of the 16th century. There is the little church of Santa Maria, with a remarkable 18th century altar in polychrome and gilt wood.

In Leofara, a lively local Association, "l'Fere", together with the CAI of Teramo, promotes activities for the tourist and cultural improvement of the Teramo mountains. In late October every year, in Leofara, there is a famous Chestnut Festival. 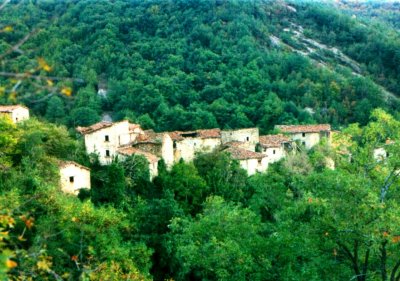 Description of the Itinerary

From Leofara (1009 meters above sea level), you can follow the path which rises to the highest house in the village. Keep on rising, leaving to your right the path for the Colle della Croce (m.1070) and then proceed to the right up to a large chestnut forest. You will reach a crest and get down up to a fork (1000 meters), to the right, then you'll reach a small mountain pass (995 meters) and cross the Valle dell'Acero ditch (975 meters); proceed then inside a rich chestnut forest, and you will reach a rural house (Casa De Simoni, m 850); go beyond two ditches and reach the deserted hamlet of Laturo. There is no road any more.

The hamlet, placed on a hilltop, is half-hidden in the vegetation; actually just a few houses in stone, some with the typical "gafii" (balconies in wood); there is also a tiny church. The last inhabitants left in the early Seventies. The few families living here were mostly families of woodsmen, shepherds and chestnut farmers. The atmosphere you can breathe among these old walls is of depressing abandonment; poverty and the difficulty of working up here at last drove also the few inhabitants so fond of the place to look for a better life quality elsewhere. 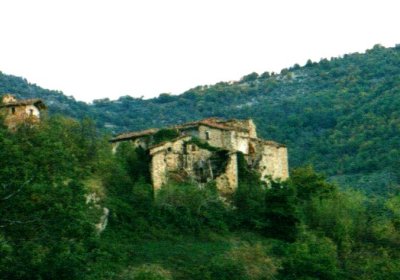 However, let us continue on our way, along the path that goes out of the hamlet, and enter another chestnut forest; at a fork (m 970), we'll leave on our right a path leading to an old farmer home (Casa il Monte) and proceed straight on, until we reach a second, deserted hamlet, Settecerri. The village, in a magnificent panoramic position, also has a medieval urban structure, however it is not so typical as Laturo, since some houses have been renovated in a modern style, with horrible aesthetic results. The village is deserted, however it is clear that, occasionally, it is inhabited by the owners of some of the houses. Moreover, we also notice that Settecerri can be reached also by car, from another side.

We go back on our steps along the path followed to come up here; at the previous fork, we reach the Casa il Monte (m 1067) and then, near a small shepherds refuge, the Sorgente La Cordella (m. 1125), near which a Roman settlement was identified and several ceramic fragments dating to the times of the Roman Empire were found. From here, an easy path leads to the Colle della Croce (m 1192), and finally we'll get down to our starting point, the village of Leofara. Once reached Leofara, it is worthwhile to drive for a short visit to the small village of Vallenquina, only a few km away, along the road towards Valle Castellana. In this small hamlet there is a very beautiful medieval castle to see. 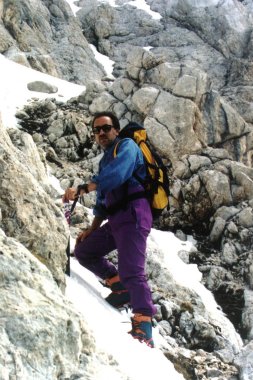 We are indebted to Ugo Ianni, a trekking guide of the CAI of L'Aquila, for the information and the photographs provided.

Ugo has been a mountain-lover for decades. He has reached all the main summits in the central Appennines, has visited canyons and grottos with speleological groups; he made several ascents (both in summer and winter) of the Gran Sasso and other Appennine mountains, reached various important summits in the Alps, climbed typical "ice waterfalls", attended courses on snow science and avalanches. He is an expert of the mountain in winter, of mountaineering skiing and cross-country skiing, in which field he is vice-assistant for the CAI committee of Aquila. He is an expert of cultural routes (e.g. hermitages, tholoi etc), has made photographic research on rare and typical animals of Abruzzo (bear, griffon, chamois, eagle) and on typical flora. For the future he is planning trekking excursions outside Europe. 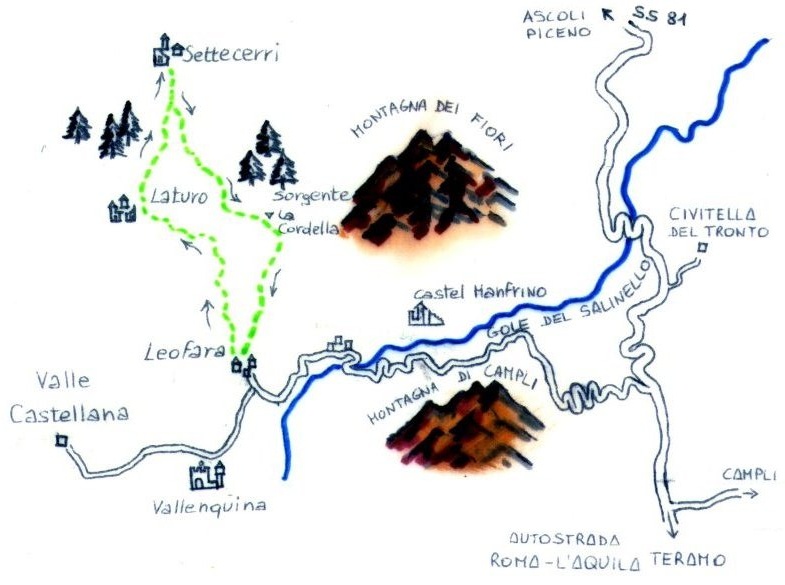