The Prehistory of Emigration

To understand such a complex, massive phenomen as was the emigration from Abruzzo and the whole of Southern Italy (and also from other countries in Europe) in the aftermath of the Industrial Revolution in Britain and North America, a great many factors are to be taken into consideration.
As regards Abruzzo, the key to understanding emigration is to be found only in a thorough evaluation of what Abruzzo had become through thousands of years of an almost isolated territory, self-sufficient economy and independent local administrative systems.
Versione Italiana ➩
Follow Italy Heritage on Facebook

Human settlements in the Abruzzi are very ancient, dating back to the early Paleolithic Period. In the Iron age (2000-1000 a.C) newcomers (today identified as Piceni) settled here and established the core of the first Italic peoples. They were the Sabini, Piceni, Equi, Vestini, Marsi, Frentani, Marrucini and the Peligni and Bruzzii. These populations were subjected by the Romans in 305 BC but not fully integrated until the social war against Rome in 90 BC. With already a great history behind themselves, this was the beginning of a decadence of an independent civilization, a decadence due not to the inhabitants but to the governors of the next two millenniums.

With the granting of Roman citizenship, Abruzzo became an Augustan province, and took the name of Provincia Valeria, but it was greatly neglected in the imperial age, since it did not have great economic or strategic importance. After the fall of the Roman empire Abruzzo was the theater of the struggle between Byzantines and Ostrogoths and underwent heavy devastation. Later on, the Longobards divided it into two parts (afterwards the plural "Abruzzi" was used); the former annexed to the dukedom of Spoleto, the latter to that of Benevento. Between 1061 and 1150 the Normans defeated the Longobards and unified the region again, receiving it as a feud from Pope Hadrian IV; and ever since then Abruzzo was a part of the kingdom of the Two Sicilies.

In 1266 the Anjou proceeded to an administrative organization, then the domain of the Aragonese followed, then the Bourbons in the 17th century. All these rulers left the area in the utmost carelessness, turning it into one of the most desolate areas of Italy. In the Napoleonic period there were riots of farmers under Murat, then again under the Bourbons after the Restoration, and with the new Kingdom of Italy in 1860.

After the Unity of Italy, the Savoy kings were not willing to solve the heavy social and economic problems, on the contrary, each sign of discomfort or dissent was addressed as open rebellion and ever after 1861 repression was hard, always mistaking legitimate requests as social riots of bands of brigands. There were actually brigands, as everywhere, but they were here useful to accuse of brigandage also those who were rightly asking for a greater attention to the economic and social problems of the South. 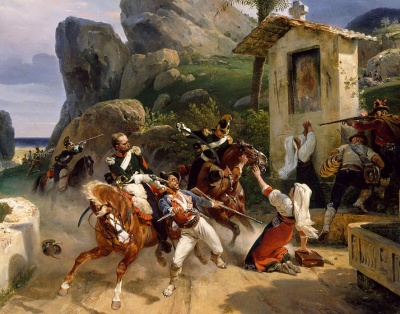 Italian brigands surprised by the troops of the Church State.
Painting by Horace Vernet (1831).

The true brigands according to the inhabitants of Abruzzo were the Savoy. The South had become a land of conquest for the ravaging liberal, unscrupled middle classes, just as in England the Industrial Revolution had fed on the poor classes and the Irish, and as the American wealth was built on the hardships of the slaves and the slaughter of the Native Americans.

The "Piemontesi" centralized power and the economy, cancelled the administrative autonomies of the municipalities, suppressed those lay or religious institutions that had for centuries maintained a rare, almost unique social balance, allowing the weak a defense against the powerful; they abolished the fiscal system of the Bourbon kings, deemed at the time the best in the world, and the welfare state developed in the South through the centuries.

Through the sale of the common municipal land and the church properties, the Kingdom of Italy obtained huge sums, that were to be employed in the development of the industrial system of the North; then, passing protectionist laws to defend the interest of Northern land-owners (the famed tax on wheat) they caused the final collapse of the Southern industrial development and of the whole economy of the South. Also Abruzzo, along with most Southern regions, was therefore ignored by the Industrial Revolution spreading at the time in Europe, North America and just then developing with the massive help of the Italian monarchy in the Northern regions, and was caught in a progressive crisis of its whole economic system.

The "Piedmontese" took away the factories' machinery, the religious goods, the municipal common land, ancient books and even the rails of the railway tracks. The valiant, proud young people were persecuted, forced to abandon their lands, and went to toil on the lands of someone else, and to increase the wealth of foreign peoples, building dams, tunnels, skyscrapers, palaces, museums, railways, or turning deserts into fertile soil.

At last, in World War II Abruzzo became the central battlefield in the fight between the Germans and Allied Forces (Rommel against Montgomery along the Gustav line); whole villages and towns were literally razed to the ground by American bombings in the famed, long battle of the Sangro river. The governments of the postwar period, with the industrial centralization policy in the North, made the depopulation of the whole area still worse than before.

Innumerable events, both on the local and national level, accompanied the migratory wave especially in inner Abruzzo. Among them the unity of Italy in 1860 and the consequent introduction of the compulsory military service, brigandage (a proverb of the time quoted "either brigand or emigrant"), the deep crisis of the old agricultural and sheep-raising system.

Abruzzo, surrounded by its rugged mountains, had remained isolated from the rest of Italy for long centuries, an isolation that had established a balance between population and resources and favored an almost self-sufficient economy, strictly connected to the nature and climate of the region; this isolation was finally broken by the railway network which connected Pescara, Ancona and Foggia, and later on the Sangro area to Naples. In the new Italian kingdom, unified under the monarchy of the Savoy, Abruzzo was one of the poorest regions. The Abruzzese economy was still based on sheep farming and agriculture, practiced according to age-old methods which could not stand the competition of the rest of Italy.

The poor agriculture of the high lands damaged the cultivation of potentially more fertile plains and basins. Deforestation in the mountainous and hilly zones was increasing the risk of landslides and floods in the lowlands. River floods were furthermore frequent with the consequent increase of the marshy areas.

The development of agriculture in Apulia took away the precious winter pastures used by the Abruzzese shepherds, and sheep farming underwent a crisis and consequently also the wool manufacturing industry, one of the main profitable activities of the Abruzzese.

Local industry, which because of the long isolation was mostly represented by little crafts activities (wool manufacturing in Sulmona, L'Aquila, Scanno and Castel di Sangro; in Avezzano flax and hemp manufacturing, in Roccaraso and Pescocostanzo lace and jewellery, ceramics in Castelli and Campli. Iron and woodwork in the Maiella area) could not stand the competition of the powerful industries of Northern Italy and Europe.

In the face of such a precarious economic and social situation, in the last twenty years of the XIX century a strong migratory exodus began towards other countries. After 1870 a steady emigration is already registered from the province of Chieti and Molise. The flow became especially intense in the mid 1880's, reaching its peak between 1900 and 1915. Between 1880 and 1900 the inhabitants of the areas of Aquila, Sulmona, Vasto and Lanciano emigrated in large numbers. The province of Teramo will follow in the early 1900's. In the last two decades of the nineteenth century and the first decade of the twentieth the emigration rate regularly increased every year, up to a maximum in 1913 ( when over 872.000 emigrants left from Italy), then there was a decline in the years of the first world war.

The main destination was America, almost a forced choice because of the vicinity of the ship-sailing ports (Naples, connected through the Sangritana Railway) and the cost of the voyage, which was almost free to Argentina and Brazil, since in the two countries, after the abolition of the slavery, there was a great demand of cheap labor in agriculture.

Most emigrants were farmers, were mainly southerners and in the North came mostly from Veneto and Friuli. The deep difference in economic and social development among the Italian regions were to the root of the phenomenon: above all between North and South, and then town and countryside, industrialized and backward agricultural areas.

In the absence of true alternatives, the rural southern masses spontaneously chose emigration. The government itself favored this phenomenon, since on the one hand it was a kind of exhaust valve, removing the danger of social explosions and on the other, through the funds sent by the emigrants to their families in Italy helped to restore the payment balance.

The true effects of this hemorrhage on the Italian economy are difficult to evaluate and contradictory. In the short run, a lower demographic pressure created a relative decrease in the work offer, allowing those who stayed to gain higher wages and better working conditions. But in the long run, the depopulation of the southern countryside delayed development, taking away the young and strong and leaving in the villages women, children (that will later mostly join the husband/father who emigrated first to pave the way for them) and the elderly.

About 1915 there were half a million Abruzzese abroad. And about 150,000 had come back from the United States and Argentina, a very low percentage in the face of the ever growing numbers of inhabitants of the Abruzzi getting ready for the great adventure. During Fascism, for obvious political reasons, emigration towards United States came to a stop, while continuing in direction of South American countries. After the second world war, when the frontiers of the United States closed to emigration, the exodus took the direction of Canada and Australia, virgin territories still to be explored and developed, and welcoming immigrants.