8 Km. from Torricella Peligna a little distance from Montenerodomo, against an astounding natural scenery lies the ancient Roman town of Juvanum. On a plateau at 100 meters (over 3000 ft) above sea level, Iuvanum is located between the Sangro and the Aventino valleys, just below the mother mountain, the Majella massif.
It was excavated after detailed studies and research since the early 1900's and today is an archeological park where panels guide visitors to the exploration of this ancient Roman town. The Park is open from 9 a.m. to sunset, and entrance is free (Tel.: 0871/331668)
Versione Italiana ➩
Follow Italy Heritage on Facebook

Iuvanum was a "municipium" administered by "quattuorvires" including the territory of present Montenerodomo, Pennadomo, Torricella Peligna, Taranta Peligna, Palena, Gessopalena. The name was most probably derived from the Latin verb "iuvare", meaning "to improve health" connected possibly to the presence of an underground spring where is now the fountain of Santa Maria del Palazzo. In past centuries innumerable shepherds would stop amid the rich pastures surrounding this spring during the long migration which would take flocks of sheep from the mountains of Abruzzo, inaccessible in winter, down to the wide plains of Apulia (present Puglia). 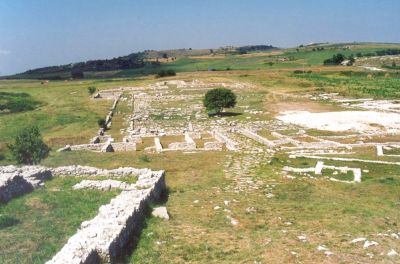 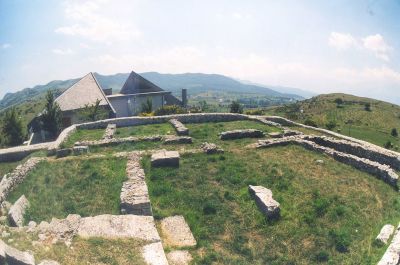 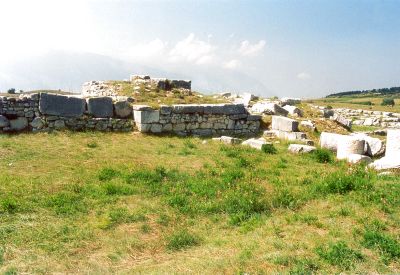 The archeological remains stand out as silent witnesses of a remote, glorious past, when Iuvanum was the economic and administrative center of the area inhabited by the Samnite population called Caraceni. The most ancient buildings, dating back to the late 3rd and 2nd centuries BC, are two temples on top of a hill, the nearby acropolis and an ancient theater down that same hill. There are still big fragments of a wall of the 4th century BC, built in Majella rocks, which surrounded the temple.

After the end of the social war in the 1st century BC Iuvanum became an important political and administrative center of the Roman Empire. Most of the buildings on the plateau date back to the Roman period: the forum, the tabernae, the basilica and the private homes. In the year 346 AD a terrible earthquake hit the Samnium province, and also the giant walls of Juvanum collapsed; those that we see now were rebuilt after that earthquake. And in later centuries as with most Roman town in Abruzzo stones were taken from the local people to build their own homes. 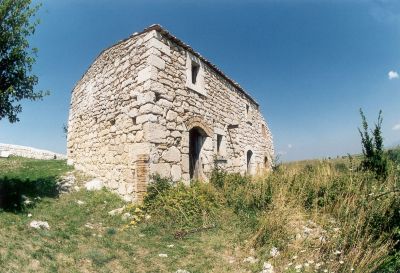 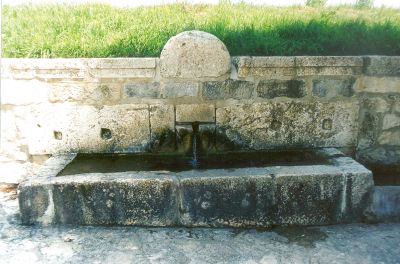 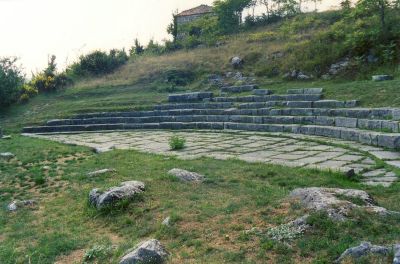 Since the 1960's excavations have brought to light the monuments on top of the acropolis. The temple, dating back to the 3rd century BC was probably built over a previous Italic temple connected to a water cult, and in the Middle Ages a Benedictine Abbey called Santa Maria di Palazzo rose on it. The inscriptions found on the site refer to the worship of Diana, Minerva and above all Hercules, the semi-god closely associated to the rural world of sheep raising and agriculture, whose image was found in many small statues excavated on the site.

South-West along the hill there was the theater (2nd century BC), of which the lowest seven rows and part of the orchestra can still be seen. The acropolis was built during the 2nd century BC. A paved street connects the temple to the wide, rectangular Forum, the heart of the Roman city ; along one of the long sides there is an inscription with the name of the architect in the period of Emperor Claudius. On the sides there were arcades and statues, of which only pedestals are now left, and lined on the long sides there were tabernae, kind of shops and locals. 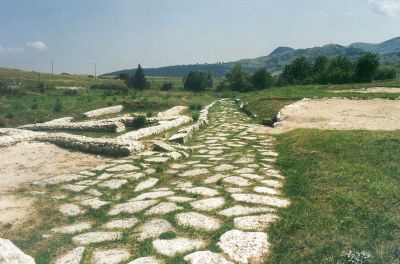 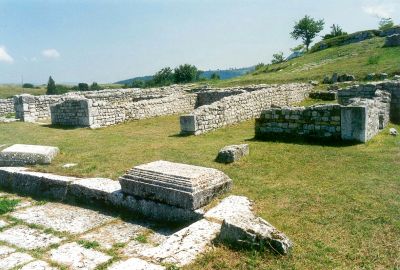 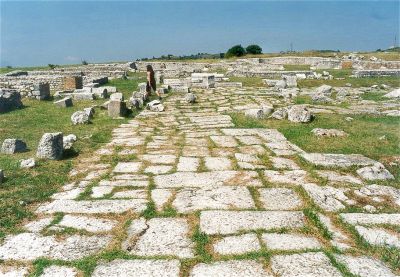 In the North there is the basilica, a marble-paved building which was either a site for the worship of the emperor or a tribunal. Excavations south-west to the forum started in 1987 and brought to light rooms and remains suggesting crafts and service activities, like metal or ceramics workshops and beauty centers.

Other important findings included two statues in toga apparel, now preserved in private collections in nearby Torricella Peligna. The most precious finding, a white marble, stuccoed statue in the Alexandrine style portraying Io, the maiden loved by Zeus, is now in the National Museum in Naples. More fragments are preserved in the Archeological Museum in Chieti. 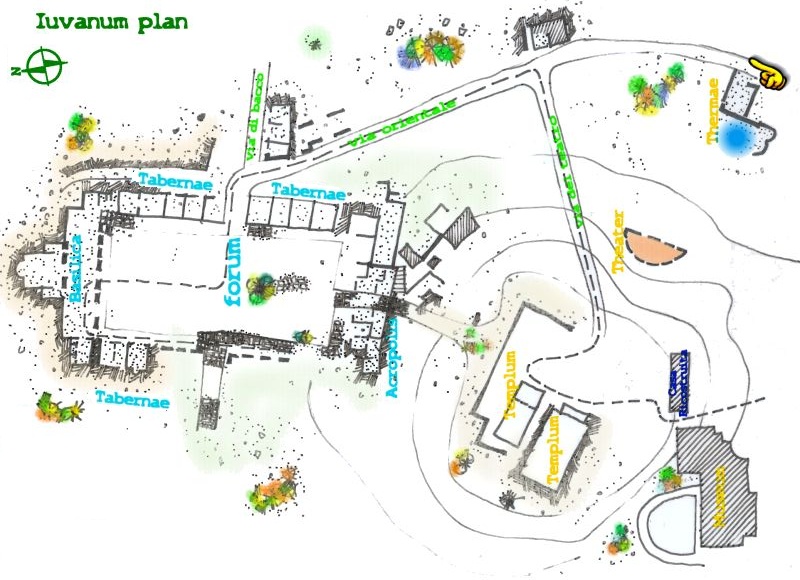