The name Italia was born here

Before Rome was even founded, the lands on the Eastern side of the Apennines were inhabited by peoples of Indo-European stock today known as the "Piceni", divided into many different tribes.
When Rome started its expansion in the 5th century BC, little by little the various tribes were subdued and became allies of the Romans. The Roman victories and conquests, achieved also thanks to the help of the Italic peoples, ought to have favored an ever greater fusion of the Piceni with the Romans, but it was not so. Only those among them who had been granted the Roman citizenship were able to take advantage of the new wealth and power, whereas those who did not enjoy the status of Roman citizens were kept in a state of great economic and social inferiority.
Versione Italiana ➩
Follow Italy Heritage on Facebook

Discontent became widespread among the Italic peoples, and when finally the Roman Senate denied another request for Roman citizenship, a true revolution broke out: Piceni, Vestini, Peligni, Marsi, Marrucini, Frentani, Sanniti and, more to the South, Lucani and Apuli, started a rebellion against mighty Rome. This was the start of that war that was later to be called "bellum sociale" (the social war). Those peoples who had joined the Romas in the past against powerful Hannibal and terrible Perseo, the king of Macedonia, turned into Rome's most dangerous enemies. In 90 BC the rebels established the first center of an Italic state choosing as their capital Corfinium, which was renamed Italia, a name that appeared for the first time as a symbol of the common land for all the inhabitants of the Italian peninsula who were fighting against Rome. A 500-member Senate was elected and two consuls appointed, Marsian Quintus Poppedius Silone and Samnite Caio Papius Mutilus, along with twelve magistrates (praetores).

Italia is the New Capital

Corfinio, whose names derived from the Italic gods Cerfi, was chosen not only for its central position (it was located at the end of the mountain pass between the valley of Lake Fucino and the Peligna Valley, along the banks of the Aterno river), but also because it was a strategic center along the via Valeria, which continued the Tiburtina connecting Rome to the Adriatic Sea.

The new capital issued its coins to oppose the monopoly of the Roman currency and to assert the political importance of the new State. Their first coin showed a female head with a laurel crown and the word ITALIA; another coin had the word VITELIU, as a recognition of the etymology of the name Italia form the Italic word for "calf" (meaning that Italia was the land of calves).

[From Wikipedia: Scholars and archaeologists have been debating on the origin of the name "Italia". There is much consensus that the name "Italia" was originally given to Calabria by the ancient Greeks around the 8th century BC. This occurred hundreds of years before the coins of Corfinio were minted. But it was not until the time of the Roman conquests that the term was expanded to cover the entire peninsula. For a more-in-depth etymology of the name "Italia" see this article: Etimologia del nome Italia ] 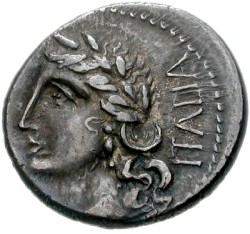 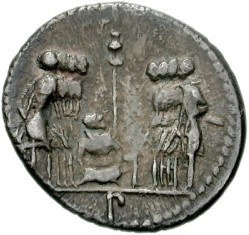 The early Italic victories compelled the Romans to prepare a stronger reaction. In the spring the war had spread throughout Abruzzo and Samnium. Fearing more insurrections in Etruria and Umbria, the Romans were led to grant the rebels some of their requests: the "Lex Iulia de civitate" granted Roman citizenship to all those peoples who had kept their loyalty to Rome; the "Lex Plautia Papiria" extended citizenship rights to all the inhabitants of those Latin or allied towns which presented to the "praetor" within 60 days. These laws weakened support to the rebels and consequently favored the Roman victory.

In 88 BC the social war ended and the Marrucini, Frentani, Marsi, Peligni and the other peoples of Abruzzo and Samnium were incorporated in the Roman tribes. Corfinio was conquered and its named changed to Pentima, which was kept up to 1928, when it was renamed again to the ancient Corfinio.