Along the Northern side of the Gran Sasso, on the Province of Teramo, where the Ruzzo flows into the Mavone, rises the picturesque little town of Isola del Gran Sasso, with its peculiar medieval and Renaissance houses on whose windows Latin saying are placed. Isola is the largest center in the Mavone Valley, also called Valle Siciliana, or Ceciliana, from the name of the ancient Roman Cecilia road.
3 km from Isola, after the turning that leads to Castelli, the world-famous ceramics center, following in the direction of Roseto, you will find the spectacular Romanesque church called San Giovanni ad Insulam or "del Mavone", rising near the ruins of an ancient monastery.
Versione Italiana ➩
Follow us on Facebook 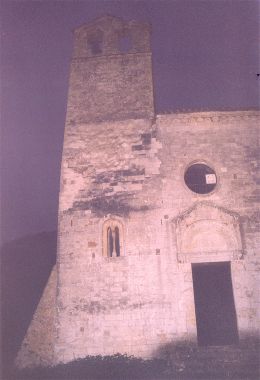 The horizontal facade is embellished by a round window and two magnificent "bifore" (a bifora is a window divided into two by a small column), among the most ancient example of this architectural element, which will become widespread in the region in the following two centuries. 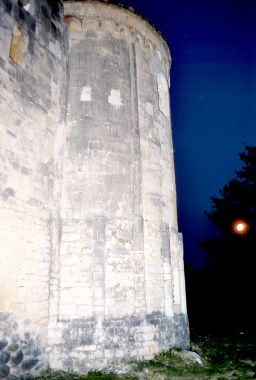 The entrance portal is surmounted by a round arch, supported by square stones with low-relief sculptures, especially zoomorphic figures typical of the early Middle Ages: strange lions, dragons, griphons, doves, are also to be found inside the church, creating an almost spectral atmosphere.

The low-reliefs are important for correctly dating the church. It seems they were already in place in 1080, while after that date the portal was made (about mid-13th century), possibly after an earthquake that destroyed the original portal, as well as the attached monastery, whose ruins are still to be seen outside the church. To a much later date belongs the belltower, also probably built on the remains of a previous building.

The inside is parted into three naves, divided by six arches on each side; the central nave ends into a semi-cylindrical apse, in the Lombard style. In the apse there is a very beautiful fresco, partly damaged, going back to the Renaissance (15th century), representing Christ inside an almond-like circle with the Virvin Mary, St John the Baptist and the so-called "San Giovannino", which is probably a Child Jesus. The author is unknown though he clearly belonged to the same school as Andrea Delitio, the most important Abruzzese Renaissance painter. 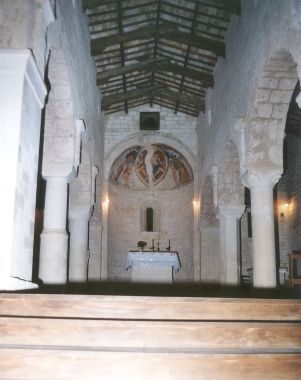 A very peculiar presbyterium (which was the area in the early Christian temple reserved to those who already had received baptism) is placed on a higher level, connected to the lower part of the church by six steps, which is built over a large square crypt which occupies two-thirds of the building. The crypt existed probably before the church was built, and may belong to the early centuries of the Christian era. 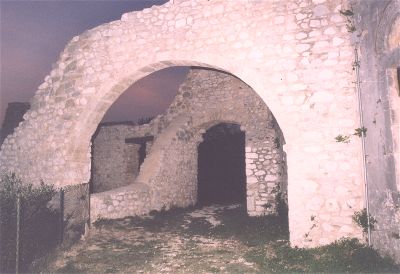