Sella Acquaviva from the Blockhaus

The itinerary to the fountain of Sella Acquavita is short and simple, but of great interest. The path proceeds along a wide mountain crest connecting the Majelletta meadows to the highest areas of the splendid mountain.
Along the way, two interesting short side paths will take to the Blockhaus ruins of a military garrison used in the years 1861-1866 to keep an eye on the movements of brigands; and the Tavola dei Briganti, a place where it is still possible to see stone carvings left by shepherds and brigands: names, places of origin, catchphrases for the bourbon king.
Versione Italiana ➩
Follow us on Facebook

Starting point is the parking area below the Blockhaus summit, which is easily reached by car following the state road S.S.614 (or Majelletta road). Then proceed on foot along one of two paths, taking origin from the Madonnina delle Nevi (2060 m); the first on the left is short and cuts along the mountain side, the second, on the right, is longer and here and there covered in thick vegetation, which may create some slight problems; the paths join on the plateau at the top of the Blockhaus (2142 m).

Then the itinerary follows to the left of the mountain. On the right there is the wild Orfento Valley, while on the right the Cima Murelle pyramid hovers on the three valleys of Tre Grotte, Selvaromana and Inferno. 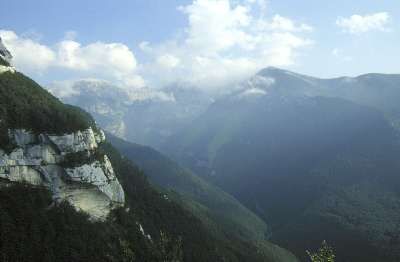 The itinerary proceeds along gentle up and down slopes crossing Monte Cavallo (2171 m, the highest point in the itinerary) to finally reach Sella Acquaviva. Just before the Sella, a short path to the right will take to the Tavola dei Briganti.

Return is along the same itinerary. Time to reach the Sella Acquaviva: 1.15 hours