The basilica rises on a hill south-west of L'Aquila, outside the 13th-century walls: a true masterpiece of Abruzzo Romanesque-gothic architecture for the beauty of its interior, the perfect integration of the architecture with the surrounding landscape.
Coming to L'Aquila from the ancient South Road, the first thing to welcome you is a massive, yet peaceful building solitary on a hill like a medieval castle. Leaving the city towards east the last thing to greet you is the facade of the basilica, rising like a splendid jewel on a vividly green lawn.
Versione Italiana ➩
Follow us on Facebook

The iconic facade in red and white stones stands out of a large, deep-green lawn. The basically simple forms and the enormous size produce an impression of majestic austerity. Outside of the basilica, to the right, there is a secluded cloister, with a typical colonnade and beautiful central fountain. The ancient refectory has now been changed into the Sala Celestiniana.

The Romanesque facade is horizontal at the top; the right half is larger that the left, and is sided by an octagonal tower, what is left of an original bell tower demolished after an earthquake. The three portals and three rose-windows are all different. The central portal, which dates back to the XV century, is decorated with 28 niches arranged in two rows over a basement with square engravings of flowery motifs. In the lunette, beneath a stone eagle, there is a fine, recently-restored fresco showing the Virgin with Child, St. John the Baptist and St. Peter Celestine, the three key figures connected to the church and the Perdonanza. 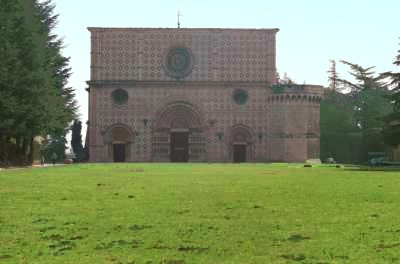 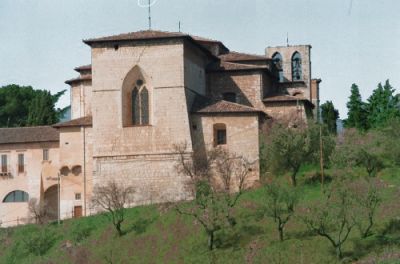 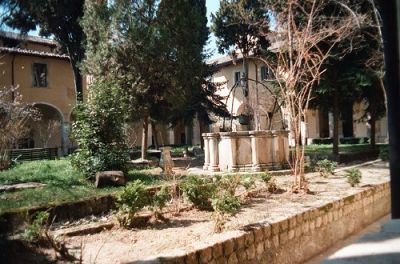 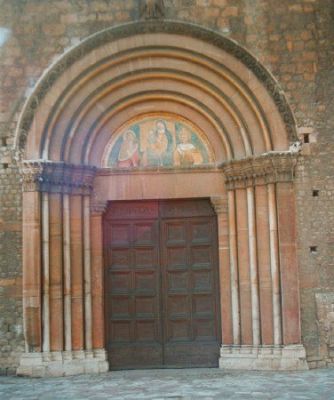 According to the tradition, in 1274 hermit Peter from Morrone, who later became a Pope under the name of Celestine V, while coming back from Lyons, where he had asked the Pope for recognition of his new order, stopped in L'Aquila and decided to spend the night on a nearby hill, called Colle di Maggio. There he dreamed of the Virgin Mary, surrounded by angels at the top of a golden stairway, who asked him to build a church in Her honour on that very place. In a few years the hermit had fulfilled the task: in 1287 his monks bought the land and a year later the construction had begun.

After one more year the church was opened, though still unfinished, and on 29 August 1294, when Peter was crowned Pope there, it had been probably completed along with the attached monastery. In the following century the Holy Door, which has become a part of the whole ritual of the annual Perdonanza, was opened in the left side of the church.

Works on the church went on for over a century, which is why so many different styles are present. The original austerity soon gave way to complex additions in the form of sculptures, frescoes and ornaments, especially after the hermit pope was made a saint under the name of Saint Peter Celestine (1313), his relics were brought to the church (1327) and pilgrims from all over Christianity came for the annual Perdonanza. For a long time the church was isolated from the city and the Colle di Maggio could be reached only getting out of L'Aquila through a door in the city walls, the Porta di Bazzano. Only in 1854, after filling the valley between the two hills with material discarded from the construction of the new theatre of St. Ferdinando, a direct link (nowadays called Viale di Collemaggio) between the city and the church was begun, to be finally completed in the 1930's.

In 1972 the interior was restored back to the original, austere Romanesque forms, and it is divided into three aisles by two rows of columns and arches sustaining the simple, majestic wooden ceiling. The nave has a typical, rich floor, probably contemporary to the facade, characterized by artistically arranged red and white stones.

At the far end of the right aisle there's the tomb of St. Peter Celestine, whose mausoleum, paid for by the guild of wool workers in 1517, is the work of Girolamo da Vicenza. The relics were placed into silver urns: a first urn was stolen by the Prince of Orange in 1530, and a second by the French in 1646. The present urn was made at the end of the Second World War by Aquilan goldsmith Luigi Cardilli. In the transept there are two Baroque altarpieces; the right one shows a fine Virgin statue of the XIV century, probably by Silvestro dell'Aquila, a pupil of Donatello's.

In the wall of the right aisle there are niches with XIV-XV century frescoes by an anonymous local artist, showing scenes of the Virgin's life: the Virgin Mary between St. Agnes and St. Apollonia, and a Dormitio Virginis with Incoronation. Near the transept there is a Crucifixion which a small St. Julian, the warrior saint specially worshipped in L'Aquila In the wall of the left aisle there is a niche of the early XVI century showing a Virgin with Child and Saints. The Basilica is also enriched with 14 17th century paintings by monk Karl Ruther from Danzig, showing episodes from St.Peter Celestine's life. 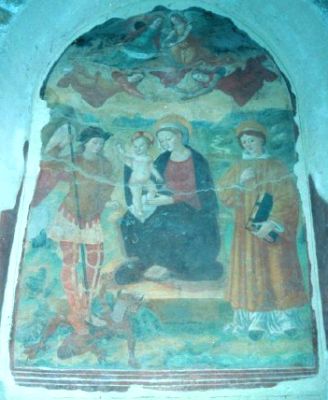 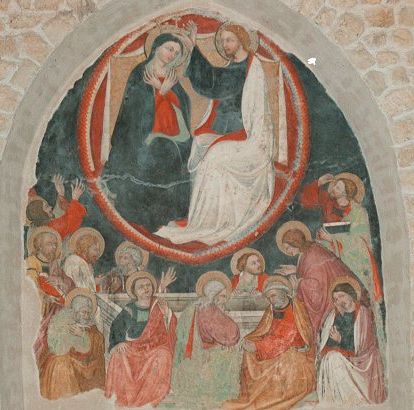 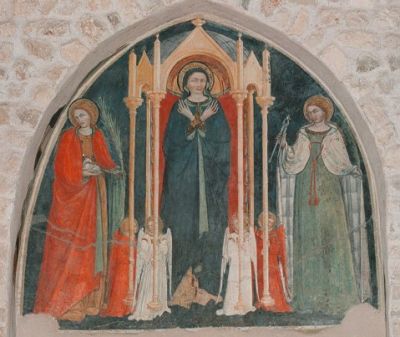 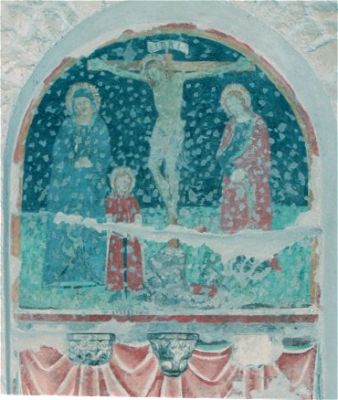