San Rocco is the protector of travellers and of people infected with plague. He is celebrated on August 17, or also on the 16 and 15, in association with the Assumption Day.
The worship of San Rocco, which rapidly spread through Western Europe since the latter half of the 15th century, was officially approved by Pope Urbano VIII in 1629. His relics were repeteadly used in the past when the terrible disease raged through Italy. In Abruzzo San Rocco is especially dear to the population in the Sagittario Valley (Frattura, Anversa, Bugnara, Introdacqua and Sulmona).
Versione Italiana ➩
Follow us on Facebook 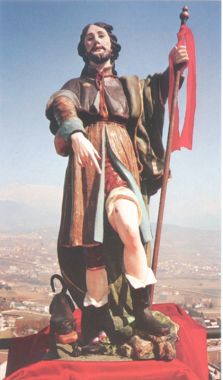 The chronology of the Saint's life is uncertain and full of legendary elements. he was born in france, probably in Montpellier. According to his first biographer, who was writing in 1430, Rocco lost his parents when he was still very young, then gave all he had to the poor and started his pilgrimage towards Rome.

At Acquapendente, on the Via Cassia, he met with the tragical sight and desolation caused by the pestilence called Black Death. Instead of going on his way and avoiding the contagion, he offered himself as voluntary to assist the sick people kept in the local lazzaretto, where soon after some sudden miraculous healings took place. He proceeded from place to place through Tuscany, Umbria and Latium, stopping wherever he found pestilence-stricken people.

After three years he was in Rome: he found Saint Peter's and other churches utterly deserted, since the Pope's seat was at that time in Avignon. He went north through Rimini, Novara and Piacenza. In Piacenza he became infected with the disease. The plague sign appeared on one leg and, not to burden anybody, he left the town and approached the bank of the Po river, to die there in solitude. Tradition is he took refuge in a hut, where he would have starved, if a stray dog had not brought him a loaf of bread every day and if a miraculous fountain had not sprung out to satisfy his thirst.

From this refuge a rich lord, Gottardo Pallastrelli, took him to his mansion until he recovered completely. After that he left Piacenza and headed north, but in the proximity of Lago Maggiore, at Angera, he was mistaken for aspy and imprisoned for five years, until he died in 1327. Another version says that Rocco went back to his native Montpellier and died there.

In statues and paintings the Saint is represented as a strong young man, with long beard and a traveller's apparel, a walking stick and a zucca for the water, and almost always accompanied by a dog that, according to the tradition, every day would take him a loaf of bread from the nearby town. In the statues San Rocco is always shown as he uncovers the wound on the left thigh, in memory of his disease.

During 600 years of worship, in representations the wound came nearer to the knee, which explains why to the protection against pestilence also a protection of knees and junctions was added in popular belief.