In the early years the wagons were wooden platforms drawn by cars, tractors or animals, covered with daffodils, on which boys and girls sang traditional motives. As years went by, the Festa changed with the times. Nowadays the wagons are moved by special mechanical devices, highly elaborated themes and in many colors. Also from year to year from rustic themes the creators of the wagons have enacted the most unusual, fanciest ideas. And more and more people come to see the beautiful event. 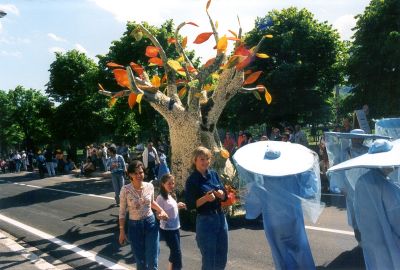 Many of the visitors do not know however that the best moment to visit is in the previous day and night, when the cardboard and metal frames of the wagons are "infiorati" that is when the daffodils are inserted one by one, with dozens of people working on each wagon. Then On Sunday afternoon the wagons parade through the town center, reaching the central square for a final exhibition before the jury, competing for the first prize. 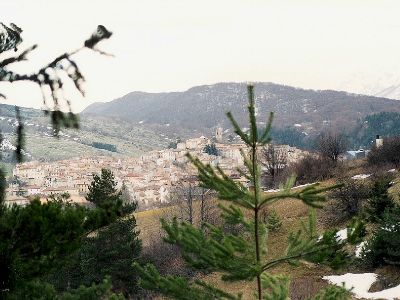 The nine carts of the 52nd edition were made in Rocca di Mezzo, Ovindoli and San Martino d'Ocre. Here are the names of the carts: "Baciamo le mani", the winner, telling the story of Sicily between heroes and Mafia bosses; "Save our soul" representing the scenes of "Bay Watch"; "E se rapissero le favole", a fantasy castle with fairy themes, "Tra 'sti Galli e 'sti Romani, quanti inciuci e fatti strani", a cart representing Obelix and actors telling a story from ancient Rome.

"Far West", a pioneers' cart covered with daffodils; "Rospo per amore" the story of a prince changed into a toad in search of a damsel to achieve the transformation; "La famiglia Addams"; "Storia di giocattoli", with a bee playing the drums and actors telling the difference between a toy maker of "good" toys and another toy maker of war games; "Fantasmaiale", where couple in their honeymoon in France during the World Cup are obliged by ghosts to play a soccer match.

Here are the names of the carts: "Ciak si gira", on the history of the America from Columbus to President Clinton with Ms Lewinsky, around a wagon in the form of the Statue of Liberty drinking Coca Cola. 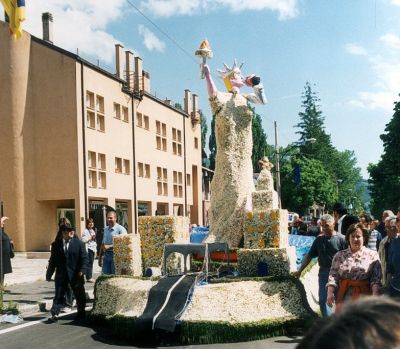 "Ci vuole un albero", in the form of an oak tree with characters dressed up as butterflies, mushrooms, water and fire. "Anima e core", a Neapolitan fancy with the Vesuvius and a mandolin. 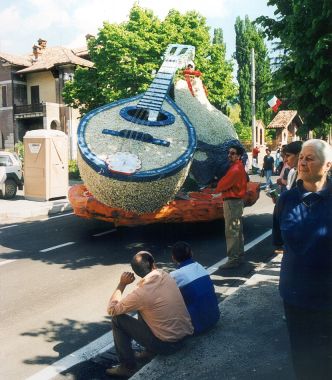 "Yomo Sapiens", a giant yogurt with the popular comic actors Aldo, Giovanni and Giacomo trying to rescue the yogurt inventor from kidnappers. "Vuota la Matrioska" three Matrioskas in different sizes with characters running in search of Anastasia after the 1917 Russian revolution. 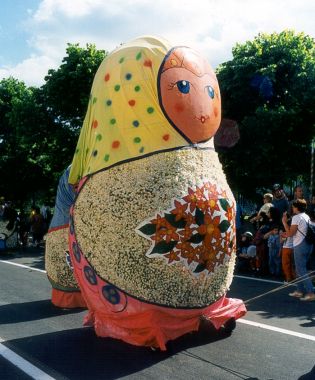 "Non tutti i dadi vengono per nuocere" a choreography of clowns fighting against bad people. "I Simpson nel Congo", in the form of Bart Simpson launching messages against racism, and the other of the Simpson gang following. 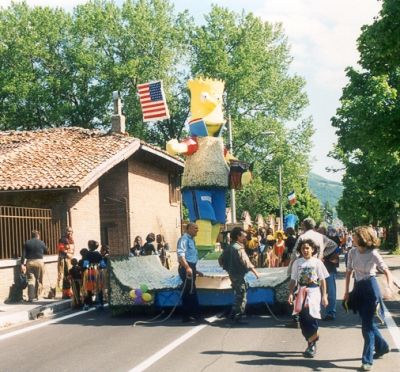 15000 visitors to a wet Daffodil Festival for the 54th edition. The daffodils opened too early this May, and the parade was interrupted by a violent thunderstorm after the third cart, and resumed only some hours later. But the waggons were more beautiful than ever and all the months' work was duly appreciated, especially the traditional waggon, drawn by oxen, called "Come allo temp’ de ’na vota" made by the elderly people of the place. The other carts: "Avrò ali per volare", "Tartaruga transgenica", "Una questione di cuore", "Un miraggio è pur sempre un miraggio".
Pictures by L. Mazzeschi
ItalyHeritage on Facebook