The Rocca of Calascio

In Abruzzo we find all kinds of castles and towers, both inside urban settlements and hamlets, and in remote, strategic positions.
Among the most iconic, known around the world for its strange beauty, is the Rocca of Calascio used in recent times, also with the surrounding plateau, as the setting for historical movies, such as "Lady Hawke", starring Rutger Hauer and Michelle Pfeiffer, for a TV film on Padre Pio da Pietrelcina, and some scenes for the film "The name of the Rose".
Versione Italiana ➩
Follow us on Facebook

Castles and towers are a typical feature of the Middle Ages and Renaissance. In the 12th and 13th centuries the repeated invasions caused the building of castles almost everywhere, both for military and civil defense. These kinds of fortifications became the model for all the towns and cities in Italy and Europe, wherever Rome had extended its domination: private and public buildings were inside defensive walls. Also the settlement in the countryside were defended by fortified constructions called "castella". The structure remained the same in the early Middle Ages.

Between the 12th and the 14th centuries a change took place in consequence of the Byzantine and Arabian fortresses, and also of the German camps (usually with towers). The new structures were independent from the inhabited sections, and had four round or polygonal towers in the corners. In the early 15th century, with the introduction of fire weapons and artillery, the castle was gradually replaced by fortresses with huge bastions.

The Rocca of Calascio

At 1460 m. above sea level, this unique "rocca" was in the Barony of Carapelle, a vassal of the Celano Countdom. At first only an isolated tower was built, with a side of 10 meters. Then a walled courtyard was added with four cylindrical towers at the corners, placed on oblique basements. The central, inner tower is on four floors, the corner towers have two floors and the corridor connecting the round towers has merlons alternated with loopholes.

The borough that rose around the Rocca in 1463 was also surrounded by walls and towers by order of Count of Celano Antonio Piccolomini, nephew of Pope Pius II and son in law of King Ferdinand I of Aragon. Similarities can be found with other castles built by Count Piccolomini, such as Celano, Balsorano, Ortucchio, Capestrano.

Rocca Calascio came under Leonello De Acclozemora in the second half of the XIV century, and was later given to Ferdinand, king of Naples. At that time a slow decline of the citadel began, and the villagers started to build houses away from the fortress, on the site where the village called Calascio now rises.

The Rocca was used to communicate through torches by night and mirrors by day and thanks to a system of connected sighting towers the messages reached the Adriatic on the one side and Naples on the other in a matter of hours.

There were never battles in the area, apart from a bloody fight between the Piccolomini army and a band of brigands. The church of Santa Maria della Pietà was built by the shepherds in 1400 to give thanks for the brigands' defeat.

The Rocca was mainly used in the centuries as a control post of the "transhumance", that is the seasonal movement of sheep from pastures in the mountains to pastures in the plains. The small borough of Rocca Calascio was built by a group of shepherds in the 13th century to take advantage of the protection of the military garrison against brigands.

With the introduction of artillery castles lost their primary defensive functions and continued to be used as as sighting posts. The Rocca was badly ruined in the 1703 earthquake, and the population moved downward to the settlement of Calascio. Differently from the other castles of the Aquilan territory, which were intended as a refuge for the villagers and therefore very large, the Rocca was intended only to accommodate the troops. 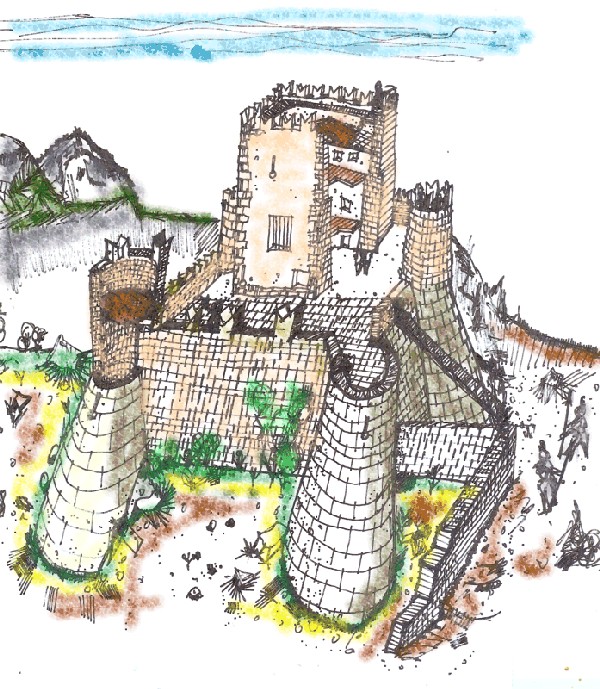