The Gran Sasso - When in 1753 Bolognese Captain Francesco De Marchi reached the summit of the Monte Corno, almost 3000 mt a.s.l., he saw more or less what any climber can see today. The mountain is 90 minutes' driving from Rome, a few miles from L'Aquila.
From Monte Luco, a round hill just over L'Aquila, the view of the giant of the Apennines, consisting of the Cresta delle Malecoste, with its very interesting calcareous strata, Pizzo Cefalone and Monte Portella, and Corno Grande (2914 mt). The Corno Grande is about 200 million years old; the last geological uplift dates back to 5 million years ago. Since then water, wind, ice have attacked and eroded the mountain.
Follow us on Facebook

From May and throughout the summer, excursions are possible reaching Campo Imperatore from Assergi, a small village near the Gran Sasso, either through a road ( 30 km) or in five minutes by cableway, then follow an easy path up to Monte Scindarella (a paradise for skiers in winter) 2250 mt a.s.l., to enjoy the view of all the mountains of the chain. 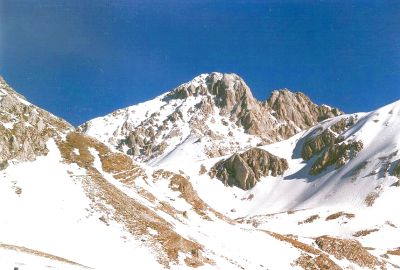 Campo Imperatore is a wide plateau of glacial origin, and many excursions of varying difficulty are possible. One possible destination is the Calderone, a small glacier, the southernmost in Europe, located at 2800 mt., near the Corno Grande, protected by an amphitheater of steep rock walls. Another fine destination is Fonte Grotta, on Monte Camicia at 2000 mt, which is the highest spring in the Apennine.

Campo Imperatore is not only a great destination for mountain lovers and geologists, but also an area rich in history. For hundreds of years in September shepherds started for the long transhumance journey that would take them to the province of Foggia, in the Apulia region, along the " tracturus magnus". Throughout the plateau, but also along the route, there are many great historical and religious monuments of Abruzzo, starting from the poor stone huts used by the shepherds, to the small countryside churches where they stopped to pray, to the great solitary castles guarding the territory. Recently, in 1991, to better preserve the area, a new national park was established, the "Gran Sasso and Laga Mountains Park", with a surface area of 200,000 hectares, comprising five provinces and 55 municipalities.

From Campo Imperatore the "via normale" 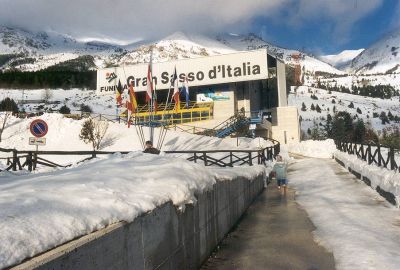 The Albergo Campo Imperatore [No. 2 on the map] is a little distance from the astronomic observatory [No. 3 on the map] at the foot of the Monte Corno. The base can be reached through a cableway from Fonte Cerreto (20 km from L'Aquila) [No. 1 on the map], or driving from monte Cerreto for about 30 km in late spring, when the road is free from the snow. From autoroute A24 exit Assergi, 2 km from Fonte Cerreto; from l'Aquila there are buses almost every hour.

The excursion offers astounding, unforgettable views of high-mountain landscapes. As the song goes "So' sajitu aiu' Gran Sassu, so' remasto ammutulitu, me parea che passo passo se sajesse aj'infinitu" (I climbed up the Gran Sasso, I was speechless, it seemed to me one step after the other i was climbing to infinity"). 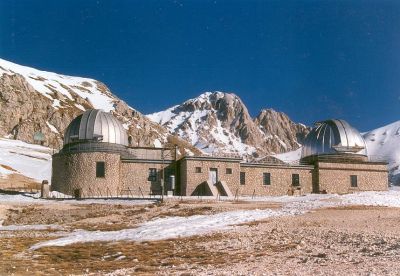 This classic excursion starts ascending towards the observatory, then turning right into a path rising through the "cresta della Portella". After reaching the crest, you enter a wide valley liying between Portella and Monte Aquila [No. 1 on the map]. After some ascending turnings, you reach Sella di Monte Aquila (2335 mt, 45 minutes). From the pass, you follow a path crossing at medium height the green basin of Campo Pericoli and aim at Corno Grande. Then you cross a grain passage (Brecciaio) and climb through steep turnings to the Sella del Brecciaio (2506 m., 1 hour) [No. 5 on the map], a wide plain along the western crest of the Corno Grande. The path proceeds through more turnings, and you leave on your right the path through the Western Crest, then enter the wide Conca degli Invalidi [No. 6 on the map], occupying the Northern side of the summit.

At the end of the climb, you leave on your left the turning to Sella dei Due Corni [No. 7 on the map], and climb straight upwards, always following the CAI signals, along hard grainy terrain to the top 2914 (1.15 hours) [No. 8 on the map]. The view is astounding: Corno Piccolo, Pizzo Intermesoli, Monte Aquila, Piana di Campo Imperatore and to the east the hills of the province of Teramo and the Adriatic Sea. On very clear days with binoculars you'llbe able to see Rome and the Thyrrhenian Sea. Between the Western and the Eastern summits of the Corno Grande you will see the Calderone glacier, the Southernmost in Europe. Then you'll come down along the same itinerary, and two hours later you'll be back at the Albergo campo Imperatore.