This month we'll be looking at one of the most deeply loved saints in central Italy and Abruzzo: Sant'Emidio. And the reason why, is for his patronage against earthquakes.
In the past centuries the rural populations felt the need to find help, either from human or divine intervention. And earthquakes were among the most dreaded calamities, being the origins, which science had not yet explained, unknown and mysterious. And earthquakes were, sadly, relatively common events in the Appennines, due to the "young age" of the chain.

Born in Treviri in about 250 A.D., young Emidius soon parted from his pagan parents. A legend says that at the exact moment when he was professing his Christian faith a terrible earthquake destroyed the temple of Jupiter. He became a priest in Milan and later on was a bishop in Rome then was sent to Ascoli, where his protection against earthquakes became widely known. Many followed his examples and embraced the Christian religion, destroying the statues of the pagan idols. Emidius was beheaded in 303 A.D. A painting by Pietro Tedeschi, showing the saint supporting a wall, is in the Pinacoteca Civica, Palazzo dell'Arengo, Ascoli Piceno. 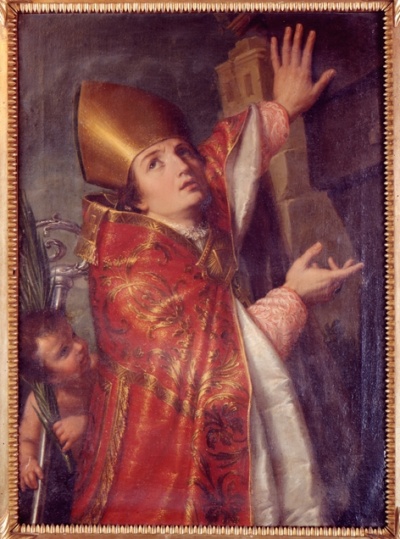 The episode that more than others gave rise to the worship of St. Emidius dates back to the year 1703. A ruinous earthquake hit central Italy, destroying L'Aquila and many towns and villages. But Ascoli, where he was a patron, was miraculously spared, according to the tradition thanks to the intervention of the Saint. For this reason many towns appointed him as patron erecting statues in his honor in the churches (L'Aquila, 1732; Cingoli, 1747; San Ginesio and Nocera Umbra, 1751).

The iconography shows Sant'Emidio supporting a crumbling wall. In Ascoli there is in the Cathedral a fine silver statue, and his festive day is 5 August. In Abruzzo there is a church to Sant'Emidio in Caprafico (Teramo), built in 1324 but reconstructed in 1450. There are altars to this saint in Corropoli, Civitella del Tronto, Torricella Sicura, Morro d'Oro, Mosciano, Collevecchio and Canzano. After the 1703 earthquake, the cult greatly flourished in the Valle del Sagittario, southern Abruzzo, and in the area of the Majella.