One of the most important Benedectine Abbeys in Abruzzo, San Giovanni in Venere lies a little distance from Fossacesia (CH) on a rock sorrounded by olive trees, with a wide view on the Adriatic below. 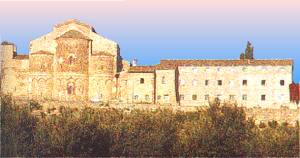 6 miles from Anxanum (ancient name of Lanciano) between the rivers Sagro and the Olivello, on a high rock dominating the small harbor of Venere (which is recorded in ancient maps) the Frentani had a temple and small hamlet dedicated to Venere Conciliatrice, possibly the same Venus worshipped in Rome as Viriplaca, where quarreling spouses went to be reconciled. The temple was described as eight-sided, with an entrance covered by a porch supported by columns. The tradition says that St. Benedict himself founded a monastery on the place, but to this there is no proof. In 741 a church is mentioned in a diploma issued by Pope Zacharias I. On the site of the temple Count Trasmondo of Teate (Chieti) built in 973 A.D. a church in honor of the Virgin Mary and St.John the Baptist. In 1015 Count of Chieti Trasmondo II gave it with many other donations to the Benedictines, who proceeded to build a monastery attached to the church. The history of the Abbey can after that be followed through documents and notary acts.

In a diploma of 1047 there is mention of a castle in Rocca di San Giovanni in Venere built for protection of the manks and the farmers who cultivated the fields around the abbey. The first Abbot was Arnolfo followed by Giovanni I, who received from Emperor Henry III, who was travelling from Benevento with Pope Clemens II and passing through Abruzzo, on 1 march 1047 the confirmation of 199 churches and castles, with wide lands. In the 11th century Abbot Oderisius I of Palearia ordered towers and walls to be built to defend the monks and farmers, and in the plain started the development of salt mines. In 1165 Abbot Oderisius II greatly improved the abbey and established it as a great center of the economy and culture. The abbey grew in importance and power and for this reason possibly was attacked on 14 march 1346 by the people of Lanciano, who stole the provisions and set fire to the castle. After that the abbot decided to rent part of the lands to the inhabitants of Lanciano instead of allotting them to feudal lords. Thanks to this gesture of good-will and friendship, when in 1381 Count Ugo Ursino of Manoppello attacked the monastery, Lanciano sent an army that broke the siege. In 1411 the castle of the Rocca San Giovanni was rebuilt, and an underground tunnel connected it to the monastery.

The decorations on the outside, as it can be seen today, can be dated to the years 1204 - 1230, after the death of Odorisius II. The peculiar, asymmetric facade of the church, shows a rich marble portal of Apuleian influence, called "portale della Luna"), sided by two pillars: in the one on the right there are representations of Daniel in the den of the lions, the Archangel Gabriel and Zacharias, while in the left pillar there is an annunciation, Saint Anna, St John the Baptist, and two peacocks drinking from a vase. In the lunette above the portal there is a high-relief with John the Baptist, Jesus and the Virgin Mary. There are two other portals, different between themeselves, on both sides, the work of Maestro Alessandro, whose name is carved in the stone. From one side portal (on the left of the facade) people exit form Mass, while the portal on the right leads to the fine cloister and the monks' area. Nowadays the monastery is teaming with religious life thanks to the Passionist Fathers who take care of it.

The majestic, austere inside is divided into 3 aisles surmounted by round arches. The presbyterium is high on a platform which can be reached climbing 14 steps Below the presbyterium there is an important crypt, built with Roman columns probably taken from the temple to Venus. The three apses in the back of the crypt are covered with great frescoesThe central fresco shows Christ in throne surrounded by angels, with a book on his left where the words "ego sum lux mundi, via veritatis, vita" are written. On one side John the baptist has the inscription "Ecce agnus dei ecce qui tollit peccata mundi", on the other side John the Gospel writer. The most beautiful is however the fresco in the apse on the right, by Luca di Pallustro from Lanciano, commissioned by Abbot Oderisius II one century before Cimabue and Giotto, which shows together with a great color technick a simplicity and tenderness never before recorded in painting. The fresco shows a Virgin Mary with Child sitting on a chair, surrounded by St. Nicholas from Bar and st Michael the archangel dressed in white and red with multicolored wings.
ItalyHeritage on Facebook