Italy seen from the sky 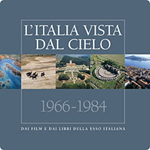 In 1965 Esso Italiana entrusted director Folco Quilici with the creation of a series on "Italy seen from the sky." The mission was particularly challenging both for the enormous wealth of history, landscape and art, but also for the innovative use of the helicopter as a camera vector.
Editions were made in English, French, German and Spanish and circulated through the embassies and the Italian Cultural Institutes. The documentaries were shown at fairs, Italian days and other events.
A sort of modern "cartography", a documentation of seas, coasts, cities, art, well or little known. The scripts for the video were written by great names as Leonardo Sciascia, Cesare Brandi, Mario Praz, Italo Calvino, Guido Piovene, Michele Prisco, Ignazio Silone, Mario Soldati, and others.

It took Quilici thirteen years, during which fourteen films were produced, with editions in foreign languages. The series won awards, was broadcast by RAI and major international networks. From 1969 to 1984 sixteen volumes were also published.

Esso Italiana, between 2002 and 2006, started a program to recover and reproduce the movies, renovated with advanced techniques to preserve them for the future, as a documentary evidence of the changes of the Italian landscape in over thirty years. The 14 titles of the series, which you will find here with parallel Italian / English text, are linked below.

The Lazio documentary was presented by Ambassador Vinci at the UN headquarters. The Tuscany documentary was nominated for the Academy award as best documentary in 1971. The Basilicata and Calabria documentary won in 1968 the first prize at the national festival of documentary films in Venice (award for best director, best spoken commentary, best original score).