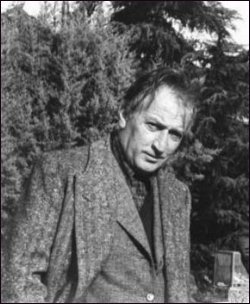 Gianni Rodari was born in Omegna, near Lake Orta, province of Novara, on 23rd October 1920 and died in Rome on 14th April 1980. An author, educator and journalist, he wrote many books for children and teenagers, where the main theme is the struggle of good versus evil and the importance of friendship, and was translated into many languages.
The poem Il vestito di Arlecchino was made into a song, music composed by Roberto Fasciano. In the video, costumes and masks of Harlequin, Columbine, Pantalone, Pulcinella, Brighella, Balanzone. The video is a creation of Roberto Fasciano YouTube channel. In case it does not appear properly, see it on YouTube directly.
In 1970 Gianni Rodari was awarded the prestigious Premio Andersen; among the greatest authors of the "fantasy" theme, he also wrote La grammatica della fantasia (The Grammar of Fantasy, 1974), about the art of inventing stories. In Italy there are now hundreds of parks, clubs, libraries, playgrounds, streets, kindergartens and elementary schools named after him, among them the Parco Rodari in Omegna, his hometown, and the Public Library of Rome Municipio VII.

Cipollino, his most famous character, fights for his fellow vegetable friends against the fruit royalty (Prince Lemon and Tomato), and became extremely popular in Russia. 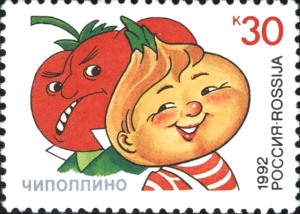