Idioms are a key aspect in language learning, often connected to the history and culture of a nation. Here some idioms beginning with C- are translated and explained.

It is used to indicate that you have realized a veiled threat or intention. The origin of the phrase is to be found in the Catholic liturgy: the antiphon is in fact a short verse that is recited or sung before or after the psalmody, during Mass. In music, this is the first form of refrain. The key feature of the antiphon is to summarize in a few lines the entire psalm, hence the origin of the phrase.

The origin is uncertain but probably connected to the Italian revolutions of 1848, which ended with the granting of a Constitution (called a "Carta") by many absolute rulers, which was revoked shortly afterwards (with the exception of the Albertine Statute of the Kingdom of Piedmont).

Cercare col lanternino (= Look for something with a small lantern)

It means to search with great care something very hard to find. The reference is to the lantern used by philosopher Diogenes of Sinope (4th century BC), who by day wandered with a lantern, saying he was looking for an (honest) man. A similar, but ironic, expression is "cercarsela col lanternino" about someone who is so foolish or reckless to always get into trouble. 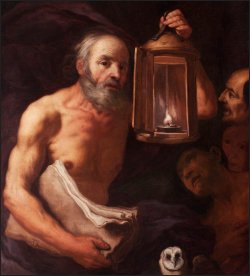 The expression is connected to an episode of Pope Leo X (Giovanni di Lorenzo de' Medici 1475 -1521), who, after appointing thirty new cardinals, realized he had forgotten a worthy prelate, whom was added later. The expression is used when we add someone or something that had been forgotten.

The origin of the association of marital infidelity to horns is unknown, and many scholars have worked in an attempt to reconstruct the time and the place where the expression "having horns" and the adjective "horned" may have assumed the current meaning.

An interesting theory goes back to ancient Greek myth of Minos. Minos had two brothers, Rhadamanthus and Sarpedon, with whom he ruled over Crete; but he wanted all the power for himself, and of course his two brothers hindered him. So Minos said that the gods had intended only him to be king, and to prove it, he added that whatever he asked the gods would be granted. He prayed Poseidon to let a bull come from the sea, promising in return to sacrifice in his honor the bull itself. Poseidon sent a magnificent white bull, which swam to the shore, and Minos obtained absolute power.

However, he did not sacrifice the beautiful white bull, as agreed with Poseidon, but another bull of less value. Irritated, Poseidon punished Minos inspiring in Pasiphae, the king's wife, an irresistible passion for the white bull. Not knowing how to satisfy her passion, Pasiphae sought advice from Daedalus, who built a wooden heifer where Pasiphae would be comfortably introduced in the best position to make love with the bull. Daedalus then took the woman to the place where the bull was grazing; the animal, without realizing that the heifer was a fake, mounted her.

Pasiphae, contrary to what simple anatomy could suggest, not only survived the coupling but also got pregnant, and survived as well the birth of her offspring, with a human body and a bull's head, which was called the Minotaur. The Minotaur's horns were a proof of Minos punishment, since everybody could see he had been betrayed by his wife.

Another possible origin is to be found in Constantinople, at the time of the Emperor Andronicus Comnenus, between 1120 and 1185. It is said that he was a womanizer of the time, and to celebrate each new conquest used to hang in the busiest spots of the capital the heads of the deer he killed in hunting, a head for every seduced woman (and betrayed husband).
Still another theory derives the "cornuto" expression from the unhappy situation of the billygoat (becco, in Italian). Its female companions are known to change partners with the utmost ease, which also gave rise to the (more uncommon) expression "far becco" which means to betray.

Culo e camicia (= to be like ass and shirt)

It is a metaphor referring to a relationship of extreme familiarity between. The origin of the expression dates back to times when the use of undergarments, such as underpants, was rare and a shirt, longer than those common today today, often to the knees, was in direct contact with intimate parts.