Year after year, during the Lenten period, Good Friday processions are accompanied by an ancient penitential hymn, the Miserere, sung in Latin to the merciful God by repentant sinners asking for forgiveness. 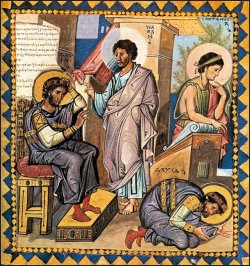 The lyrics, whose opening words are "Miserere mei Deus" (Have mercy on me, O God) are derived from one of the seven penitential psalms of liturgy (No. 50 according in the Vulgate and No. 51 according to Jewish tradition) which expresses the moral weakness of the human being.

The Psalm was written by King David around 970 BC: after meeting with Nathan the prophet, who rebuked him for the double sin of adultery with Bathsheba and the killing of her husband, Uriah, David, sings praises of God asking for His forgiveness.

Saverio Selecchy (born Sallecchia, Chieti, 1708-1788) was a musician and choirmaster, the author of a large body of sacred music; most of his production is lost, fortunately not his masterpiece, the "Miserere in G minor", composed in 1767. For centuries, the traditional Procession on Good Friday in the city of Chieti has been accompanied by the music of Selecchy's Miserere, played by an orchestra of 100 violins and a choir, through the streets of the historical center.

In 1954 maestro Carlo Mantini of L'Aquila prepared the piece for three voices for a male choir. The performance is traditionally entrusted to a choir of 150 singers, including tenor, baritone, bass and string orchestra with 20 violins. Since then, every year the Procession of the Dead Christ on Good Friday, in the city of L'Aquila,parades in absolute silence with the choir and the orchestra performing Mantini's version of Selecchy's Miserere.

[To print the text inside the scrollable box, select it all, copy, and paste in MSWord or other text editor.]
Follow us on Facebook