"Lu Rusciu te lu mare" is a folk song that originated in Gallipoli, Apulia, many centuries ago, which tells the impossible love story between a noble lady and a soldier, in an age where no one could escape their roles. 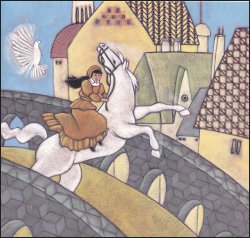 The different social classes are also expressed in the words, such as "to get married" which is "maritare" for the lady, and a dialect "'nzuru" for the humbler class.

In the centuries different versions appeared, the original one was very slow and melancholy; in the 1980's musician Luigi Cardigliano modified the melody making it faster, and since then it has become a classic of Apulian folk music.

[To print the text inside the scrollable box, select it all, copy, and paste in MSWord or other text editor.]
[The video is not seen well with Internet Explorer 8 - in case watch it on YouTube directly.]
Follow us on Facebook