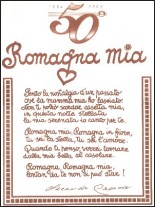 A typical "liscio" ballad, the song was written by Secondo Casadei and recorded in Milan in 1954. The waltz rhythm, accompanied by violins, tells of a man's nostalgia for his homeland, Romagna. It has become almost a national anthem for the region.
Cardinal Ersilio Tonini reported that "Romagna Mia" was among the favorite songs of John Paul II. He heard it in May 1986 during his visit to Romagna, during which it was performed, on his request, several times.

On various news programs, in the days following the death of Pope Wojtyla, young musicians told how, invited to dinner by the Pope on the occasion of World Youth Day 2000, they were asked by John Paul II to play Romagna Mia for him.

Sento la nostalgia di un passato,
ove la mamma mia ho lasciato.
Non ti potrò scordar casetta mia,
in questa notte stellata
la mia serenata io canto per te.
I feel nostalgia for a past
when my mother I left.
I'll never forget you, my little house,
in this starry night
my serenade I'm singing to you.
Romagna mia, Romagna in fiore,
tu sei la stella, tu sei l'amore.
Quando ti penso, vorrei tornare
dalla mia bella al casolare.
Romagna mia, Romagna in bloom,
you are a star, you are love.
When I think of you, I wish I could return
to my sweetheart in the farmhouse.
Romagna, Romagna mia,
lontan da te non si può star!
Romagna, my Romagna,
far away from you one cannot be!
ItalyHeritage on Facebook