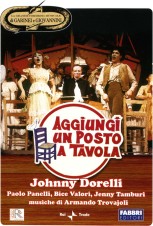 This musical comedy in two acts by Garinei (Pietro Garinei, Trieste 1 Feb 1919 – Roma, 9 May 2006) and Giovannini (Sandro Giovannini, Roma, 10 July 1915 – Roma, 26 April 1977), written between 1973 and 1974 with Iaia Fiastri, freely based on the novel After me, the Deluge by David Forrest. The music is by Armando Trovajoli, the staging and costumes by Giulio Coltellacci and choreography by Gino Landi.
The Story - Don Silvestro, a parish priest of a small mountain village, gets a call from God, who orders him to build an ark as He has decided to send a new Great Flood. Among doubts and difficulties, the priest builds it, but then, because of the veto of a cardinal, the village leaves him alone in the ark with Clementina, the mayor's daughter. The flood begins, but the priest not to leave his parishioners alone, gets down the ark, and then God decides to stop the flood.

Find the whole movie at this link

The Original Cast - Don Silvestro (Johnny Dorelli); Clementina (Loretta Goggi, later replaced by Jenny Tamburi); Crispino (Paolo Panelli); Ortensia (Bice Valori). Aggiungi un Posto a Tavola has had a great fortune in Italian theatres, and many editions were staged up to present times; it has become a classic also in schools and amateur theatrical companies.