"Aurè... e cantace 'na canzuncella"... guests at his restaurant in Naples used to say... Aurelio Fierro was born in Montella, province of Avellino, on September 13, 1923, the sixth of eleven children of Raffaele, a well-off shopkeeper, a former shepherd and "stornellatore" (rhyming verse improvising singer) that had also emigrated for a time to America. 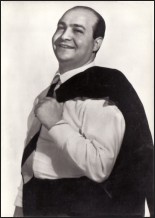 A graduate in Engineering in the 40s, in 1951 Aurelio won a competition of New Voices, and in 1952 he won the Festival of Castellammare di Stabia, deciding after that to leave the engineering profession for music.

He reached great popularity in 1957 with Lazzarella, written by Domenico Modugno, a song that became a soundtrack for the movie starring himself, Luigi De Filippo, Tina Pica and Domenico Modugno.

In 1956 at the Festival di Napoli in tandem with Grazia Gresi he sang Guaglione, lyrics by Nicola Salerno and music by Giuseppe Fanciulli. The song gained international fame for Fierro, who made many guest appearances in the U.S. and Canada in the numerous Italian communities, in the late fifties.

In 1986 in Naples he opened a successful restaurant, 'A Canzuncella, where on Saturday night he performed a dinner show. A passionate scholar of the culture and traditions of Naples, Fierro's dream was to found a museum of the Neapolitan song with adjoining small theater for tourists, but the project did not go ahead. He managed instead to publish a Grammar of the Neapolitan language and a book of Neapolitan fairy tales and legends. During the 1990's he was engaged in drafting a historical Encyclopedia of the Song in four volumes, which he was not able to complete. He died in Naples on 11 March 2005.

Some facts on Aurelio Fierro