"A hammer instead of a fist, a powerful neck, a fighter's rage. He beat his adversary to blood, then hugged him. A boxing style from the working class, all sweat, no paradise..." Rocky Marciano, aka Rocco Francis Marchegiano, was heavyweight boxing world champion since September 23, 1952 to April 27, 1956, the only athlete in the history of heavyweight boxing to retire undefeated after defending the title six times. 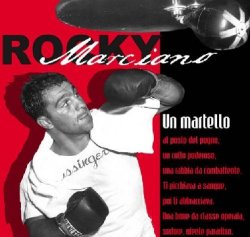 His amazing record lists 49 victories, including 43 by knockout, and no defeats. 20 of 43 KOs came before the third round. By virtue of this, he is considered among the greatest boxers of all time. Many experts believe he was the best boxer in history.

Italian biographer Emanuela Audisio writes: "There are some who never give up. There is nothing to do, they do not go down. And if they go down, they get up. You will always find them before you, maybe staggering, blood-filled, ready to step on. Sport teaches you cannot always win... They do not care, do not believe that, and always win: with a broken nose, with closed eye, a blood-red mouth. Rocky was like this. Rough, wild, graceless. His straight right punch was equivalent to a 9th grade Richter (according to journalist Red Smith). His left hook punch was an electroshock. He was not there to lose. An invincible."

Rocco Francis Marchegiano was born in Brockton, Massachusetts, on September 1, 1923, from Pierino Marchegiano, a native of Ripa Teatina, province of Chieti and Pasqualina Picciuto of San Bartolomeo in Galdo, province of Benevento, two Italian immigrants who left Italy in the early 20th century. In addition to Rocco, the Marchegianos had five other children, three daughters Alice, Concetta, and Elizabeth and two sons, Louis and Peter.

At the age of one year old Rocco contracted pneumonia, and even risked death. At 16 years old, thanks to his work on a construction site, he developed a powerful physique, great for practicing boxing. In 1943, aged about 20, he joined the army.

After laying down an Australian with a violent right punch during a brawl in a pub in Cardiff, UK, Marciano realized his potential as a boxer and with the help of his uncle Mike, who got him a manager, Gene Caggiano, began his amateur career in the boxing world. 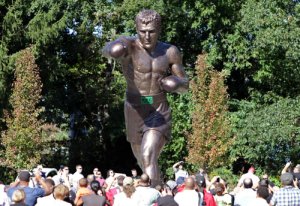 His career as a boxer

During his first fighth was disqualified after a few minutes for incorrectness. He subsequently enrolled in an amateur tournament in Portland, where he got to the final but lost because of a sharp pain in his right hand. He was offered his first meeting as a professional in 1947 by Alli Colombo: Marciano beat Lee Epperson with ease, thanks to his deadly right punch that hit the opponent boxer on the diaphragm.

Stocky, slow, technically crude and with a lunge shorter than the heavyweight average (170 cm, the lowest ever in the history of the world champion heavyweight), Marciano compensated for these limitations with aggressiveness (sometimes to the limits of the rules), physical endurance and, above all, with his terrific right punch, which earned him the nickname of The Brockton Blockbuster; he sent to the mat all his opponents, including major, outstanding boxers.

His career went on at full speed with all 17 games won by knockout, including one against the dreaded Harry Bilazarian in 1948, a match that Rocky win after about 92 seconds, sending Harry KO with two powerful punches.

Forced to take breaks due to a severe trauma in his back, Marciano returned to the ring against Carmine Vingo, an Italian-American like him but of different physical size, 193 cm tall and with many matches won by knockout. Vingo went down in the sixth round, unconscious, was rushed to the hospital and after that terrible evening was no longer able to fight. Even if Rocky won the match, he too was unconscious and was taken to hospital, where he remained for a few days, though not in a serious condition as his opponent who was in a coma and needed two years to recover, during which Marciano paid Vingo's medical expenses.

Among his achievements is a knockout victory in the 8th round against "Brown Bomber" Joe Louis - actually already declining - on October 26, 1951 at the Madison Square Garden. Louis has always been Marciano's idol and after the match a true friendship was born between the two; later on Rocky helped the old champion, in both health and financial difficulties - after the latter's retirement.

He won the title of World Champion Heavyweight on September 23, 1952 in Philadelphia, defeating by KO at the 13th round Jersey Joe Walcott, albeit with difficulty and even after going down to the mat during the 1st round. He defended the title 5 more times, winning all of the matches, the last against Archie Moore on September 21, 1955.

On 31st August 1969, just the day before his 46th birthday, he died in a plane crash in Newton, Iowa, along with the pilot of his private plane, a Cessna 172; the flight had departed from Des Moines under very difficult atmospheric conditions.

He is buried in a crypt at Forest Lawn Memorial Cemetery in Fort Lauderdale, Florida, next to his wife, who died five years later. His father died in March 1972 and his mother in January 1986.

He was not endowed with a boxer's body: he was small, with no arm extension, or balance. But he knew his limitations, and worked on them. He walked a lot, seventy-five blocks from his room to the gym every day. He always ate vegetables, drank very little, only in the evening, carried in his pocket a jar of honey to sweeten his coffee. He chewed his steak, but did not swallow, spitting the meat pieces into a bowl. The only boxer to exercise the pupils, with a pendulum that he had hung on his bed, and followed with his head. He trained 250 rounds for just one fight, a hundred times more than others.

Rocky's connection with the Mafia has often troubled biographers. Rocky Marciano knew the mafiosi of course, because the Mob controlled the boxing world.

Once he was proposed to sell a match, in 1955, against Englishman Don Cockell, in San Francisco. One of Marciano's close friends, Ed Napoli, recalls he sat with Marciano in a hotel room and listened while a gangster made him an offer. "Rocky, you can be set the rest of your life if you throw this fight, you can beat him in the rematch." the mobster told him. At this, Marciano got angry, and ordered the mobster out. "You disgust me, I'm ashamed that you're Italian. Get outta here and don't come back." The fight ended in the ninth round, with Cockell crawling in search of the referee's arms.

The order came from Chicago, Milwaukee, Philadelphia: "Keep him clean, do not get him dirty." The mafiosi were convinced Rocky had to remain clean, spotless. He was respectful, kissed on both cheeks godfathers Raymond Patriarca, Carlo Gambino, Frank Costello. The Mafia invited Rocky to lunch, advised him tailors, bought him clothes and shirts. He also went to visit Vito Genovese, on the point of death in prison in Leavenworth: Don Vito had asked the favor to see the footage of his matches.

The mob guys respected him, loved him because he represented what they really wanted to be, the toughest in the world, the machos. He was a myth for the Mafia, their idol: a macho, a warrior, a paisà.

But, more than undefeated, Rocky Marciano left the ring utterly untainted. He retired because it was a promise to his wife Barbara. He got money, women, fame and respect. It seems he had an obsession for girls, he changed them all the time, compulsively. He had an obsession also for money: only cash, banknotes, not checks. It seems he had three million dollars, all cash, in safe deposit boxes in Cuba, Florida, Alaska. He saved on everything, as many who had known poverty. 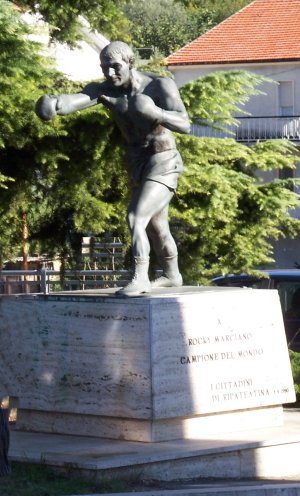 The International Boxing Hall of Fame recognized him among the greatest boxers of all time. Ring Magazine named him Fighter of the Year in 1952, 1954 and 1955.

Three of his meetings were named fight of the year by Ring Magazine:

Marciano is a member of the International Boxing Hall Of Fame. A bronze statue of Marciano, by artist Mario Rendon was officially unveiled at Brockton on September 23, 2012, the 60th anniversary of Marciano winning the World Heavyweight title.

A bronze statue of Rocky Marciano was erected in Ripa Teatina, Italy, to celebrate the birthplace of his father.