Juan Manuel Fangio (Balcarce, 24 June 1911 - Buenos Aires, July 17, 1995) is considered among the best Formula One pilots of all time. Fangio scored 24 wins, 35 podiums, 29 pole positions and 23 fastest laps in 59 consecutive Grand Prix. His record of five world titles resisted for 48 years and was matched and then replaced, only in 2002 and 2003, by Michael Schumacher. 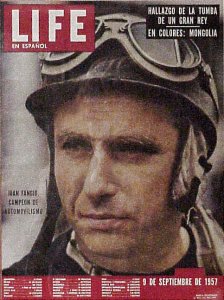 He remains the pilot with best average wins, the only driver to win Formula 1 championships with four different teams and the oldest-ever champion (at 46 years and 41 days old). An all-round sportsman, he was very good also in competitions with covered wheels, as shown by his good positions in the Mille Miglia, his victory in the 1954 Carrera Panamericana, at the Nurburgring in 1955 and the Sebring 12 Hours in 1956 and 1957.

Fangio had been driving since age 10: "The first time I drove... I got in the car, I started the engine, I started to drive and when I saw that I could turn and slow down I felt the car was alive... And I learned a lot in the bus. Every time I got on one I was very close to the driver."

From childhood he abandoned his studies to devote himself to the automotive mechanics. By 1922 he was working as an assistant to Raimundo Carlini in an automotive garage where he learned to drive vehicles, also repairing farm machinery. In 1924 he began working for Ford and at 13 years old he joined as an assistant in the mechanical workshop of Studebaker pilot Miguel Viggiano.

His spirit was hardened by years of grueling races in South America and daily apprenticeships in garages: Fangio knew all the secrets of an engine and learned the art of racing in just ten years. In 1950, during the Coppa Acerbo in Pescara, he reached an incredible speed of 311.314 kmph.

In 1938 he debuted in Turismo Carretera, competing in a Ford V8. In 1940, he went on to compete with Chevrolet, won the Gran Premio Internacional del Norte and was consecrated as Argentine Champion, a title he repeated the next year. Then he competed in the categories of Fuerza Libre (a predecessor to Formula 1 in Argentina), where he won four times, from 1947 to 1949 with a Volpi-Chevrolet car and in 1950 with a Talbot. 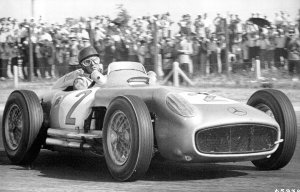 Fangio in a Mercedes-Benz

It is worth noting that in the year when Fangio won his first world title, he was already 40 years old. He raced in Formula 1 continuously for seven years earning a total of up to 5 world titles in 1951, and 1954 to 1957, and dominating the sport. In 1951 he became world champion with the Alfa Romeo, in 1954 and 1955 with exceptional Mercedes cars, in 1956 with Ferrari and with a Maserati in 1957. He also took part to the legendary Mille Miglia race that he won in 1955 in tandem with Sterling Moss.

Fangio with a Maserati, Montecarlo 1957 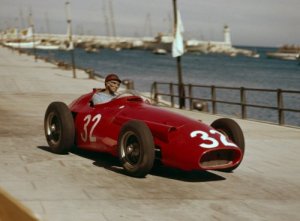 He had also luck on his side, in an era when the Grand Prix exacted a long death toll: in his years of memorable feats thirty pilots died, including Varzi, Collins, Wimille, Musso, Castellotti, Ascari, all leading men of the automotive world of the fifties.

But all the positive comments that he collected had as a counterpart a rather self-centered character. According to Enzo Ferrari, his delusions of persecution ruined his image in spite of the great things that he could do in a race. He cried out to sabotage in more than one occasion and also complained of a "sentimental" conspiracy. But in spite of his gruffy public character, Fangio always had a peaceful personal life: with his family and friends he was cheerful, talkative and generous.

He retired in 1958 after a famous kidnap in Cuba. The Batista Dictatorship had established the non-Formula One Cuban Grand Prix in 1957. Fangio won the 1957 event, and set fastest times during practice for the 1958 race. On 23 February 1958, gunmen of Fidel Castro's 26th of July Movement entered Hotel Lincoln in Havana and kidnapped the pilot. His captors allowed him to listen to the race via radio, bringing also a television for him; they tried to talk to him about their revolutionary programme but Fangio did not have an interest in politics. 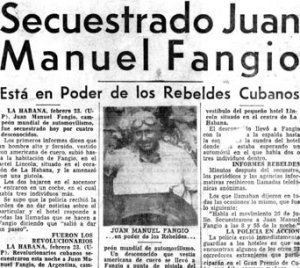 He was released after 29 hours and remained a good friend of his captors. The captors motives were to force the cancellation of the race to embarrass the Batista regime. In 1999 Fangio's kidnapping was made into a film, Operación Fangio, directed by Argentinean Alberto Lecchi.

During his life after retirement from competitions, he was president of Mercedes-Benz in Argentina since 1987 until his death on 17 July 1995 at the age of 84. He also visited Italy one last time in 1989, to be present at the inauguration of a street in the name of Enzo Ferrari in Pescara.