Parma, 25 March 1867, from Claudio Toscanini and Paola Montani a son, Arturo, was born: he was to become one of the greatest conductors of the late 19th and first half of the 20th century, probably the first to become a global superstar.
Follow ItalyHeritage on Facebook 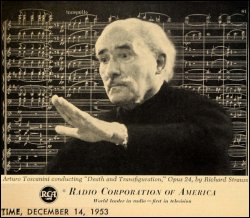 The young Toscanini won a scholarship for the Conservatory of Parma, where he studied cello and composition from the age of nine, graduating in 1885, and in 1880 became a cellist at the Teatro Regio.In 1886 at 19 years of age, he joined as a cellist and second choirmaster an opera company starting a tour in South America.

While in Brazil, director Leopoldo Miguez left the orchestra. His replacement, who was to direct the "Aida" in Rio de Janeiro, was booed by the public. Toscanini, prompted by some fellow musicians, took his wand, closed the music sheet and began to direct the work from memory. It was an astounding success: in this way he began his career as a conductor at the age of 19, continuing to lead during the tour and when he got back to Italy at the Teatro Carignano in Turin. He played the cello in the first performance of Verdi's Otello (La Scala, 1887) in the presence of the great composer, who was very impressed when Toscanini pointed out an error in the score.

In June 1898 Toscanini began to collaborate with the Teatro alla Scala and worked to reform performances, obtaining a modern stage lighting in 1901, and in 1907 an orchestra pit; he also forbade the entrance to laggards and removed the encore.

In 1908 he resigned from La Scala and was invited to conduct at the Metropolitan Opera in New York. During this experience Toscanini began to consider the United States as his second home.

He returned to Italy in 1915, and performed exclusively in benefit concerts and to brighten the spirits of soldiers in WW1; he even conducted a band on the Monte Santo, just captured during the Isonzo Battle, and for this act was decorated with a silver medal. Immediately after the end of the war, he engaged in the reorganization of the orchestra of La Scala.

Of socialist ideas, he became a strong opponent of fascism and Nazism. Thanks to his enormous international prestige, he was able to keep the orchestra of La Scala independent in the period 1921-1929. He even refused to direct the premiere of Giacomo Puccini's Turandot if Mussolini were to be present in the theatre.

On May 14, 1931, at the Teatro Comunale in Bologna , he refused to perform the fascits hymn "Giovinezza" and the " Marcia Reale " in the presence of Fascist leaders Ciano and Arpinati; later that evening, he was then attacked and slapped a "black shirt" near a side entrance of the theater. Probably because of this episode he decided not to conduct in Italy until fascism and monarchy were in power.

In 1933 he broke relations with Nazi Germany as well, rudely refusing an invitation from Hitler and abandoning the Wagner festival in Bayreuth. In 1938, after the annexation of Austria by Germany, he abandoned also the Salzburg Festival. The following year, partly due to the increasing racial persecution, he left Europe for the United States.

His ideas led him to Palestine, and in 1936 in Tel Aviv he directed, refusing payment, the inaugural concert of the Palestine Symphony Orchestra (now the Israel Philharmonic Orchestra), intended to provide work for musicians Jews fleeing from the Nazis. He strove also to find jobs and homes to the persecuted Jews and political exiles from Hitler's regime. Albert Einstein wrote to Arturo Toscanini: "I feel the necessity to tell you for once how much I admire and honor you. You are not only the unmatchable interpreter of the world's musical literature... In the fight against the fascist criminals, too, you have shown yourself to be a man of greatest dignity... The fact that such a contemporary exists balances many of the delusions one must continually experience from the species minorum gentium."

He conducted the first concert broadcast December 25, 1937, in NBC Studio 8-H in Rockefeller Center, New York City. During World War II he directed exclusively benefit concerts on behalf of the U.S. military and the Red Cross, managing to raise large sums of money. He strove also to the creation of a propaganda film in which two compositions directed by Giuseppe Verdi symbolic value: the overture to "La forza del destino" and the Hymn of the Nations, which he modified by changing the Hymn of Garibaldi and inserting the national anthem of the United States and the communist "International".

In 1945 he directed the Carnegie Hall orchestra in recording sessions of American composers , including George Gershwin ( "An American in Paris", "Rhapsody in Blue"), Copland (El Salon Mexico).

In 1946 Arturo Toscanini returned to Italy to vote in favor of the Republic and to direct the historic concert for the reopening of La Scala, remembered as the concert of liberation, largely devoted to Italian opera, with the singing of Renata Tebaldi, defined by Toscanini "angel's voice."

He conducted a memorial concert to Arrigo Boito, including the Ninth Symphony by Beethoven, in 1948, the Verdi Requiem in 1950, and for the last time, a concert dedicated to Wagner in September 1952.

On December 5, 1949 he was appointed a senator for life for high artistic merit, but he decided to give up the honor the next day sending from New York a telegram to the then President of the Italian Republic, Luigi Einaudi: "È un vecchio artista italiano, turbatissimo dal Suo inaspettato telegramma che si rivolge a Lei e La prega di comprendere come questa annunciata nomina a senatore a vita sia in profondo contrasto con il suo sentire e come egli sia costretto con grande rammarico a rifiutare questo onore... desidererei finire la mia esistenza nella stessa semplicità in cui l`ho sempre percorsa... La prego di non voler interpretare questo mio desiderio come atto scortese o superbo, ma bensì nello spirito di semplicità e modestia che lo ispira..." ["It's an old Italian artist, very anguished by your unexpected telegram, that appeals to you and begs you to understand how this appointment as life senator is in stark contrast to his feelings and how he is with great regret forced to refuse this honor... I would like to end my existence in the same simplicity in which I have always lived... please do not interpret this choice of mine as a rude or arrogant act, but rather in the spirit of simplicity and modesty that inspires it..."

He retired at 87 after a remarkable career, and his last concert, entirely dedicated to his beloved Wagner, was with the NBC Symphony Orchestra on April 4, 1954 at Carnegie Hall, New York. In that last concert the maestro, famous for his extraordinary memory, for the first time lost his concentration and stopped for as many as 14 seconds, after which he resumed directing the Tannhäuser. At the end of the concert he quickly reached his dressing room, while the applause in the theater did not seem to stop anymore.

When he died of a heart attack in New York at the age of 89, his body was returned to Italy and buried at the Monumental Cemetery of Milan, in the family tomb built on the death of his young son Giorgio by sculptor Leonardo Bistolfi.

In 1987, years after his death, Arturo Toscanini was awarded the Grammy Lifetime Achievement Award.