Roberto Murolo, along with Sergio Bruni and Renato Carosone, was a major figure on the Neapolitan music scene, in the period after World War II, and it is also thanks to his work that Naples ceased to be a geographical place to become a universal, all-time place of the soul.
"Murolo is not the reason that Neapolitan songs such as 'O sole mio and Funiculì-Funilulà are known abroad. That goes back to yet an earlier generation, the years at the turn of the century when so many Neapolitans emigrated and took their music with them. Interestingly, however, Murolo was part of the post-WW2 generation of Neapolitan singers who resisted the onslaught of American popular music and helped keep the traditional music of his native culture from becoming passé", Jeff Matthews. 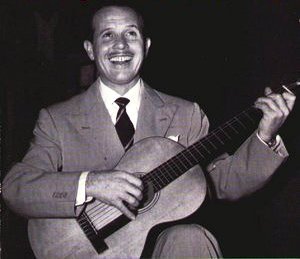 Roberto Murolo was born in Naples on January 19, 1912 (but his birth was by mistake recorded 4 days later, on the 23rd), the 6th of the seven children of Lia Cavalli and poet Ernesto Murolo (his father was probably a natural son of Eduardo Scarpetta and therefore half-brother of Eduardo, Peppino and Titina De Filippo).

He spent his childhood in a lounge frequented by Salvatore Di Giacomo, Ferdinando Russo, Libero Bovio and Raffaele Viviani. As a child, he used to sit on the floor behind the door of the studio of his father, Ernesto Murolo, a famous composer of Neapolitan songs, At five years of age he used to sing standing on a chair, at 12 he used to spend long hours at Piedigrotta, the singing district of Naples, at 15 he was playing the guitar wonderfully.

His great youthful passions were music and sports. In the latter he merged as a great diver, winning the Italian high-diving championship in 1937; Murolo always attributed his remarkable lung capacity to the long practice of water sports.

In 1933, at Ischia during one of his first performances he accompanied Vittorio De Sica singing "E palumme". In 1935 he was hired as clerk in a gas company, where he was to remain for three years, and thanks to his swimming passion, he won the national university championships, and was awarded by the Duce in Piazza Venezia. The following year he began singing in vocal group "Midas Quartet", inspired by American "Mills Brothers", with a repertoire of rhythmic songs in the vaudeville - cabaret style. The "Midas Quartet" spent eight years, from 1938 to 1946, abroad in theaters and venues in Germany, Bulgaria, Greece, Hungary and Spain, with a repertoire of international and Italian songs. In those early years, Murolo used a valuable guitar, built in 1838 by the Guadagnini luthier firm.

When he returned home after the war ended, he began his soloist career in the concert and recording industry in 1948, performing at "Tragara Club", Capri. He created a new, revolutionary figure on stage: an elegant singing voice, accompanied by just a guitar, a style that in 1954 French paper "Le Monde" called "charme delicieux".

His whispering, seductive voice, enhanced by the microphone, and his style as an old-time chansonnier immediately met the public's favor. He sang Munasterio 'e Santa Chiara (Galdieri - Barberis, 1945), Tammurriata nera (Nicolardi - E.A. Mario, 1944), Scalinatella (Cioffi - Bonagura, 1948) and other old and new Neapolitan successes, that he collected in a successful anthology. The radio made his voice popular all over Italy through the earliest 78 rpm Telefunken-Durium discs.

At that time Murolo also started a movie career, appearing in "Catene" (1949), directed by Raffaello Matarazzo, along with Amedeo Nazzari and Yvonne Sanson. In the same year he worked in the film "Paolo e Francesca" and the year after in "Tormento", but also in other films where he appeared only as a singer. And also in "Menzogna" (1952) and "Saluti e baci" (1953), where he worked next to Nilla Pizzi, Yves Montand, Giorgio Consolini and Gino Latilla.

Since 1956, Murolo began studying in depth the Neapolitan repertoire from the 13th century to the present day, with the help of guitarist Eduardo Caliendo, publishing between 1963 and 1965 "Napoletana. Antologia cronologica della canzone partenopea", twelve seminal albums of the Neapolitan song. But he also wrote his own songs: with composer Nino Oliviero he signed "O ciucciariello" (1951) and with musician Renato Forlani "Torna a vucà" (1958), "Sarrà... chi sà!" (1959), which won the Festival of Naples in the performance of Fausto Cigliano and Teddy Reno.

After the publication of his Anthology, starting in 1969 he published four monographic albums, "I grandi della canzone napoletana", dedicated to poets Salvatore Di Giacomo, Ernesto Murolo , Libero Bovio and E. A. Mario. In the mid-seventies he stopped recording, but not appearing in concerts.

In his old age he made a comeback with the album "'Na voice, 'na chitarra" (1990), in which he performed songs by other artists, including "Spassiunatamente" by Paolo Conte, "Lazzari felici" by Pino Daniele, "Senza fine" by Gino Paoli, and also appeared in celebrated duets: "Caruso" with Lucio Dalla at the piano, the funny "Ammore scumbinato" with his friend Renzo Arbore. On his 80th birthday he published "Ottantavoglia di cantare" (1992), featuring duets with Fabrizio De André ("Don Raffaè"), with Mia Martini ("Cu' mme"), with Renzo Arbore ("Na tazzulella 'e cafè"), with Peppino Di Capri ("Basta 'na notte").

On 26 January 1995 he was appointed by Italian President Oscar Luigi Scalfaro a "Grand Officer of the Republic" for his artistic merits, and on January 23, 2002 he was appointed "Cavaliere di Gran Croce", by President Carlo Azeglio Ciampi. Universally acclaimed as the master of Neapolitan song, in March 2002, during the Sanremo Festival, Murolo received the Lifetime Achievement Award, (an award given to Tony Renis in 2000 and to Domenico Modugno in 2001). On the occasion of his 90th birthday, RaiSat Album organized in his honor a special "Roberto Murolo Day - Ho sognato di cantare", designed and conducted by Renzo Arbore.

He died on 13 March 2003 in the Vomero district, Naples, at his home in Via Cimarosa 25, which, to this day, continues to be the headquarters of the "Fondazione Roberto Murolo". 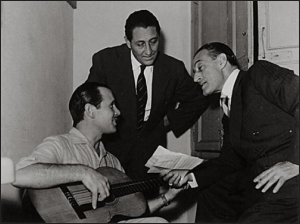