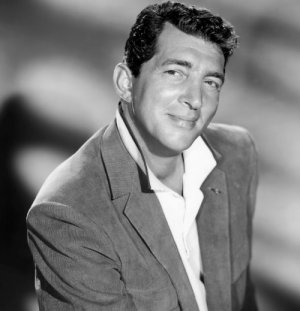 For Montesilvano Dean Martin remained throughout his life "zi Dean", the son of the barber who left for America at the beginning of the 20th century; however, Dino Paul Crocetti was waited for in vain in his father's native town. Today, a town square in Montesilvano is dedicated to the town's modern hero.

Dino's father Gaetano went to America as a barber and finally stopped in Steubenville, a quiet town in Ohio. Dino learned his father's trade but had greater ambitions. Attracted by sport and favored by a strong physique, he tried boxing but this adventure lasted just a few years; then he worked in the mines.

Finally he arrived at casino tables, working as a croupier. The entertainment world discovered his Latin charm in 1946: at thirty years old, he was spotted by Jerry Lewis who decided to introduce him at Club 500 in Atlantic City.

For the next ten years Jerry Lewis and Dean Martin were together in eighteen hilarious films. Anita Ekberg, Kim Novak, Shirley Mc Laine, Janet Leigh, Deborah Kerr, Judy Holliday, accompanied with their beauty and charm the Italian American in the cinema world. In addition to the movies in tandem with Lewis, Dean Martin starred in "Rio Bravo" alongside John Wayne, "Kiss Me Stupid" with Billy Wilder and "Airport".

Though the film industry gave him a lot of satisfaction, his real great success was in music, thanks to his inborn vocation. Unlike other Italian-American singers of his generation, Dean Martin always kept his Italian roots alive and his "That's Amore" is an all-time success.

His last major tour with friends Frank Sinatra and Sammy Davis Jr. was his swan song. A great blow in his late years was the loss of his son Dean Paul in a plane crash in 1987; the fine performer of so many Christmas songs, he passed away nine years later in Beverly Hills, California, on a Christmas Day.