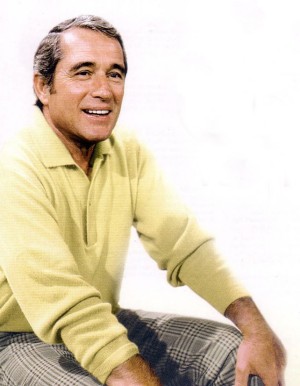 The seventh of thirteen children, he was born in Pennsylvania from an Italian-American family; his parents Pietro Como (1877 - 1945) and Lucia Travaglini (1883 - 1961) were from Palena, in the province of Chieti; his father, an amateur baritone, wished to give all children a musical education despite the family's economic difficulties.

Perry Como worked as a barber until 1933, then started working as a singer in the orchestra of Freddie Carlone and later of with Ted Weems. In 1943 he recorded his first album "Goodbye Sue" with the RCA Victor record company, to which he was loyal throughout his career until his last hit "The wind beneath my wings", 1987.

In his almost fifty-year-long career Perry Como recorded over 200 songs, collecting 14 singles that topped USA charts, 20 gold albums, over 100 million records sold worldwide. Among his most celebrated pieces, which also entered the Italian charts, there are "Papa Loves Mambo", "Round and Round", "Magic Moments", "The Rose Tattoo", "Catch a Falling Star", "It's Impossible".

Perry Como had a huge success on television. He was the first singer to have his own show, "The Perry Como Show" later renamed "The Perry Como's Kraft and Music Hall", aired from 1948 until 1963. He became the highest paid anchorman in television history, which gave him a place in the Guinness Book of Records. He also conducted a lot of TV specials celebrating the Christmas season, from 1948 until 1994.

Unlike his colleagues Frank Sinatra and Dean Martin, Como was not particularly attracted to the cinema; he appeared in just four films, all shot in the forties.

Perry Como is mentioned in the song "Baciami all'italiana" of Quartetto Cetra, as an example of elegant crooner, as opposed to the popular Italian character from Il Musichiere.

In the film "Good Morning, Vietnam", Perry Como is mentioned in DJ's Army Radio, in the scene where Cronauer announces he wants to quit because of censorship, he says "Perry Como is a genius".

In the movie "Blast from the Past" in a romantic scene, Brendan Fraser sings to Alicia Silverstone a song by Perry Como.

In the early 1994 Perry Como decided to abandon the puclic scene and retired.