In the spring of 1835, Heinrich Heine, meeting composer Vincenzo Bellini in Paris, remarked to him "You are a genius, Bellini, but you will pay for your great gift with a premature death. All the great geniuses die young, like Raphael and Mozart". 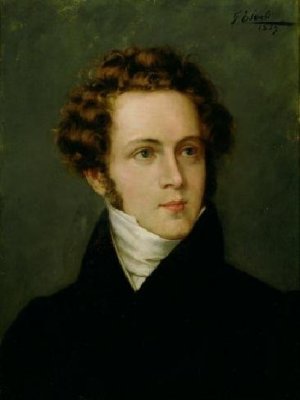 November 3, 1801, Vincenzo Salvatore Carmelo Francesco Bellini was born in Catania, in a family of musicians. His grandfather, Vincenzo Bellini Senior, born in Torricella Peligna, province of Chieti, in 1744 from Rosario and Francesca Mancini, was an appreciated composer of oratorios and sacred music who moved to Sicily to follow his music vocation. His son, Rosario, born in Catania in 1775, married in 1801 Donna Agata Ferlito, and on November 3, 1801 in Piazza San Francesco 3, the eldest of their seven children was born, and they named him Vincenzo in honor of his grandfather.

When he was 3 years old, his father began teaching him to play the piano, and at 6 he began studying composition with grandfather Vincenzo. The child was to become a musical genius of universal fame, the "Swan" of Catania, author of one of the greatest music masterpieces, the "Norma".

In 1819 young Bellini obtained a scholarship to the Royal College of Music in San Sebastian, in Naples. Among his teachers, Nicola Antonio Zingarelli, who directed him towards the study of the classics and the taste for expressive melody, without artifice, according to the Neapolitan School. Among his fellow students were musician and patriot Piero Maroncelli, and the Calabrian Francesco Florimo, which was to be one of his first biographers. During this early period, Bellini composed sacred music, some opera symphonies and arias for voice and orchestra, including the famous Dolente immagine, nowadays known only in subsequent revisions for voice and piano.

In 1825 he presented in the conservatory theater his first opera, Adelson e Salvini. The following year he met a first great success with Bianca e Gernando, staged at the Teatro San Carlo in Naples.

The following year, Domenico Barbaja commissioned Bellini an opera for the Teatro alla Scala in Milan. Leaving, The young composer left Naples and an unhappy passion for Maddalena Fumaroli, a girl whom he could not marry because of the opposition of her father to a marriage with a musician.

Both Il pirata (1827) and La straniera (1829) were amazing successes at La Scala: magazines in Milan acknowledged Bellini as the only Italian opera composer able to stand a comparison with Gioacchino Rossini for his personal style, based on expressive rather than flourished singing.

In Parma, before a provincial, more traditionalist audience, the following opera, Zaira (1829) was less fortunate. Of the five later works, the most successful are those written to be performed in Milan (La Sonnambula, and Norma, both staged in 1831) and in Paris (I Puritani, 1835). In this period he also composed two operas for the Teatro La Fenice in Venice: I Capuleti e i Montecchi (1830), and Beatrice di Tenda (1833).

The turning point in Bellini's career was his departure for Paris, where he came into contact with some of the greatest European composers, including Fryderyk Chopin, and his musical language was enriched with colors and new solutions. In addition to I Puritani, written in Italian for the Théâtre - Italien in Paris, Bellini composed several chamber romances of great interest: he was ready to compose an opera in French for the Paris Opera House. But his career and life were suddenly interrupted in Puteaux, near Paris, on September 23, 1835, when the Swan of Catania passed away of an intestinal infection before he was 34.

Vincenzo Bellini was buried in the Père Lachaise cemetery, where he remained for over 40 years, close to Chopin and Cherubini. In 1876 his body was moved to the Cathedral of Catania, to a tomb was designed by the sculptor Giovanni Battista Tassara; during this return to the homeland, the coffin was welcomed everywhere with emotion. Once in Catania, a solemn funeral was celebrated attended by thousands, among them two brothers who were still alive.

His production and style

Vincenzo Bellini wrote 10 works, among which the most famous and represented are La Sonnambula, Norma and I Puritani.

Heinrich Heine described him like this: "He had a tall, slim figure and moved nicely... His face was regular, rather long, pale; blonde hair, almost golden, combed in sparse curls; a high forehead, very noble, a straight nose, light blue eyes, a well-proportioned mouth, a round chin. His features had something vague, lacking in character, milky, and in that milky face an expression of bittersweet pain appeared at times."

Endowed with a prodigious melodic vein, Bellini devoted his short life to composition. His talent in carving melodies of the most limpid beauty still retains an aura of magic. Faithful to an ancient musical conception, based on the primacy of singing, Bellini brought first to Milan and then to Paris an echo of the Mediterranean culture that romantic Europe had idealized as a classical myth. The young Wagner was so dazzled by Bellini that he chose a Sicilian setting for his second opera, The ban on love (Das Liebesverbot oder Die Novize von Palermo), pointing the clarity of Bellini's singing as a model for German opera composers and trying himself to follow him.

In the twentieth century, in a kind of Bellini's renaissance, the composer's music attracted the attention of a number of avant-garde composers such as Bruno Maderna and, above all, Luigi Nono, who reinterpreted Bellini's music as outside the opera categories. According to contemporary musicology, Bellini's conception of sound, voice and silence has its roots in the music of ancient Greece and the Mediterranean area rather than within modern European musical tradition.

Inspired by a homonymous French tragedy, on a libretto by Raffaele Romani, the immortal "Norma" was first performed in December 1831 at the Teatro alla Scala, Milan. Priestess Norma, the daughter of a druid chief, Oroveso, is in love with Pollione, the Roman consul, who instead loves her sister Adalgisa, and meditates to leave with her. But Norma, already the mother of two children by Pollio, when she learns about this new love, wants revenge. She plans to kill her own children and and then to kill herself, but decides instead to entrust the children to Adalgisa, who goes immediately to the Roman camp, and begs Pollio to return to his old love. 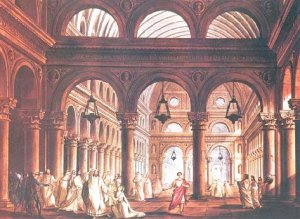 In vain: Adalgisa returns to the temple, where Pollio reaches her, but when Norma is aware of the presence of the man, she gives a signal of war, the Gauls come out from everywhere and Pollio is taken prisoner before Norma. She tries to save him, even if he does not intend to give up Adalgisa. Finally, out of passion and love, Norma pleads guilty with Pollio and asks to die with him at the stake.